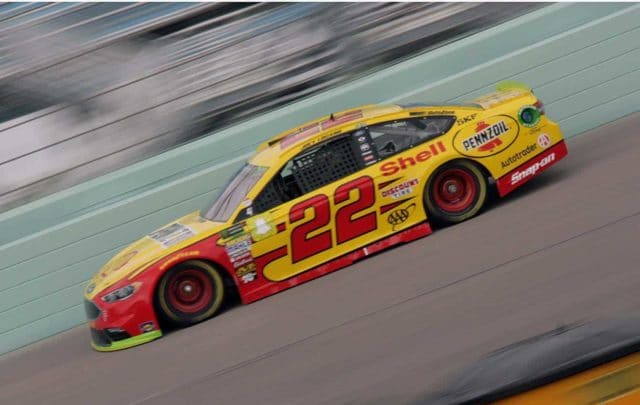 That was good enough to make him the 2018 Monster Energy NASCAR Cup Series champion in Sunday’s (Nov. 18) Ford EcoBoost 400. A late caution set up a 15-lap sprint to the finish where Team Penske’s No. 22 Ford was in perfect position to capitalize.

Logano charged to the front on the final restart and beat Truex by 1.725 seconds to earn his first career MENCS title. At 28 years old, Logano won the championship in his 10th full-time season in Cup, sixth with team owner Roger Penske. It’s his third win of the year, the lowest total among the title contenders but good enough to defeat NASCAR’s Big Three.

“We did it! We won the championship. I can’t believe it,” he said. “I didn’t feel like I was the underdog and we proved why we’re not. This team gave me the car I needed at the end to do my job.”

Observers believed this quartet was the most evenly-matched Championship 4 in the five years of the sport’s new playoff format. The main event lived up to expectations as each of them was in position to win at one point during the 400-mile event.

Harvick took control early on, charging from his 12th starting spot to win the first stage of the race. Second in stage two to Kyle Larson, it seemed like he was in full control of the event.

But Harvick started to struggle after the stage three restart with what appeared to be a bad set of tires. Having crew chief Tony Gibson rather than Rodney Childers may have made a difference as the race played out.

“We had a daytime car,” he said afterward. “We could just never get that car tightened up at the end. When it got dark, we just lost the rear grip and I couldn’t take off. Our strong point was not the restarts tonight.”

That put Truex in position to capitalize. He passed both Harvick and Logano, powering to the top spot with 48 laps to go. He then stretched the advantage to two seconds heading into the last round of green-flag pit stops. But the No. 78 team encountered a jack problem, slowing their stop and pushing them back behind the Harvick-Logano duo.

Meanwhile, Kyle Busch stayed out as long as possible, gambling on fuel with the other trio of contenders much faster. It seemed to pay off when a caution came out for Daniel Suarez spinning off the bumper of Brad Keselowski. It left Busch in the lead, in position to hang on despite an ill-handling car throughout.

Pit stops left the Championship 4 in the top 4 spots heading to what would be the final restart. But they were all shuffled up, with Kyle Busch first, Truex second, Logano third and Harvick back to fourth.

As the green flag flew, Truex was able to beat Busch to the corner, powering to the lead. But Logano made quick work of Busch, then tracked down the No. 78 with some amazing short-run speed he had all night.

“Tough way to lose,” said Truex, whose Furniture Row Racing team will shut down after this race. “Kind of reversed the tale from last year. Last year, we did the same thing they did tonight. Just didn’t play out the way we needed it to. We were terrible for 10-15 laps on new tires. I needed 15, 20 more laps. That’s just the way it goes.

“Without the last caution, it was in the bag. Had a hell of a five years with this team.”

Harvick wound up third, 3.7 seconds behind the top two, while Busch wound up in fourth place. It’s the first time in five years of the format the title-eligible drivers finished 1-2-3-4.

“We weren’t even close,” Busch said after the race. “Just sideways, all night long. We were just smoked getting into the corners. Adam [Stevens] called a great race, got us in position when we long ran that caution. Everything came to fruition but when you’re a half-second off, you’re not going to hold anybody back.”

Larson, after winning the second stage, hit the wall and got a flat right-rear tire to cause a caution. He battled back to finish 13th. Jimmie Johnson ran right behind him, 14th in his final race with Chad Knaus as crew chief. Jamie McMurray was 18th and AJ Allmendinger 19th in what’s likely their last NASCAR races as full-time competitors.

There was the “Big Three”, and then there is the Champ. Congrats to Joey Logano.

I was pulling for Truex but Logano was my second choice. Always good to see a 1st time champ.

Neutral on Logano but I like The Captain & use my share of V-Power. Congrats to them & their fans.

None of the other playoff contenders congratulated Joey in their pit road post race interviews.