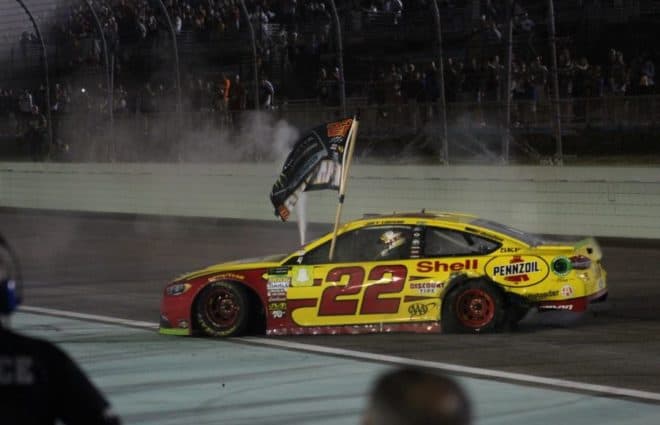 What a difference a year makes. An average finish of 18.8, 29th in driver points in a season marked by injury. That’s not very promising for a driver, especially one who’s a journeyman at best in his mid-30s. A year later, Aric Almirola finishes his season fifth in points, with 17 top-10 runs, a win, a pole and an average finish just south of 12th. While he missed the cut for the title race, Almirola rode a ninth-place finish to a four-point gap over Chase Elliott in the race for honorable mention.

For many drivers, fifth (and shy of a championship bid) would be a disappointment. Maybe it is for Almirola as well, at least a little. But it’s hard to look at anyone a year ago and see that big of a leap. It shows what a good driver can do in top equipment, that a driver can’t make up for underfunded equipment on his own and that you can’t always judge a driver by the ride he’s in

This year’s season finale really feels like an ending. The last few seasons have seen a number of drivers walk away, and this no exception. Matt Kenseth, Jamie McMurray, AJ Allmendinger and Trevor Bayne have likely seen their last days as Cup drivers come to a close.  There might be a race here and there, particularly for Allmendinger, but really, it’s over.

That’s no small thing for race fans.  You can always pick another driver to pull for, but it’s never quite the same as it was with that one guy. It may not be the sole reason or even the biggest one that interest in NASCAR has waned in recent years, but it’s hard to deny that it at least plays a role.

The youth movement is here, and the future is bright, but those halcyon summers of that all-time favorite fade from the present.

NASCAR too seems to understand that something vital has changed.  Earlier this weekend, new president Steve Phelps said that change is on the wind for 2020. Phelps said that the sanctioning body will look at the tracks, the cars, even adding midweek races. Anything may be on the table, Phelps told media in Homestead.

The one thing he didn’t mention was the elephant in the room, though: the title format that has “chased” away fans in droves the more NASCAR tries to make it fit the mold of other sports. It’s time to stop trying to shove square pegs in round holes and find some round pegs because they used to work just fine.

On the other hand, even in an ending, there was something positive. As Jimmie Johnson bids farewell to longtime sponsor Lowe’s, whose backing brought him seven championships and more trophies than he can count, another, Ally Financial has seen enough value in NASCAR even now to back Johnson for two years, every race. That’s almost unheard of in NASCAR anymore, with full-season sponsors a dying breed.  While Ally had the advantage of seeing how NASCAR sponsorship can work from the days when GMAC, the company Ally took over, was in the sport full-time, it’s still a bit of light in the darkness.

Logano said going in that he had the field covered for 20 laps. Luckily for him, exactly what it came down to was a 15-lap sprint to the checkered flag. Never far from the front, Logano started the day fifth, but by the closing laps, he was in the thick of the championship battle.

Logano entered the weekend on the outside of the Big Three of Kevin Harvick, Kyle Busch and Martin Truex, Jr., who combined for 20 wins on the season, more than half of the schedule. He ended it by outracing every one of them.

When the late caution flew for Daniel Suarez, Logano restarted third, and that could have ended his night. Instead, he was able to get by Busch quickly enough to keep Truex from getting away, and once he got to Truex, it was no contest as Logano made an aggressive move to the top of the racetrack for the winning pass. From there it was a matter of hoping nobody made a mistake to bring out the yellow again, and when that didn’t happen, Logano cruised to the win. He sent a message at Martinsville that he was willing to use his bumper for a chance at his first title, but in the end, he didn’t need it.

The turning point in the race and the title came when Suarez slammed the wall in his final race for Joe Gibbs Racing. At the time, Kyle Busch was the race leader, but he needed a caution for any shot at the title. Short of fuel and on older tires than the competition, Busch’s title hopes were dwindling with the laps. Suarez’s crash gave Busch, at least briefly and conveniently, a shot.

It also changed the complexion of the championship race completely. Had the yellow not flown, Harvick was third and gaining on Busch, who still needed to pit at any rate.  Truex had pulled by Logano for what would have cycled into second place with time to hunt Harvick with a faster car.  Without the caution, it would have been Harvick and Truex duking it out for the win and the championship.  The caution, in all its television cliché glory, changed everything.

Why… didn’t polesitter Denny Hamlin pull it off?

Hamlin didn’t have the speed to compete once the sun went down. He looked good in the early laps, perhaps hampered by a secondary pit stall pick, but more so by the changing track. Hamlin and Kyle Larson, who both had early speed, faded with barely a whimper as the sun sank below the horizon.

That gave the day to the title contenders.  The four chasing the Cup were the top four when the checkers fell for the last time in 2018.

That’s been the case consistently. Since the current title format began in 2014, every champion has also won at Homestead. That’s fitting, the cream rising to the top when it counted.

But is that the only reason? Are the other teams willing to race the top four for a win in a race where a mistake would forever brand them as “that guy” who took out a title favorite? Are the title contenders, when it comes down to everything on the line, that much better? Prior to this format, it wasn’t uncommon for someone else to win the final race even as the new champion was taking his place. Now, not so much.

How… come NASCAR didn’t put a stop to the team orders at Joe Gibbs Racing?

Did pit box selection affect the outcome of the race? If Kyle Busch had had a better car, it would have, as it allowed Busch to come out of the pits with the lead on the final stop. As it was, Busch faded to fourth, lacking more speed than the pit stall could overcome.

But how come NASCAR, which has said repeatedly that teams should give 100 percent to win and that team orders were a no-no allowed Hamlin’s team to give Kyle Busch, who qualified just behind polesitter Hamlin, the advantageous first pit stall?

Joe Gibbs, Hamlin and Busch’s team owner, made no bones about ordering Hamlin’s team to give over to championship contender Busch.  Hamlin made it pretty clear he wasn’t happy with the decision. The first pit stall is nearly always an advantage, especially so at Homestead, and Hamlin was trying to salvage a winning streak that has him visiting Victory Lane at least once each year of his career.

There’s no way Hamlin’s team wanted that No. 4 pit box. And there’s no way NASCAR should have allowed the team, especially once Gibbs made it clear he made the call to take away an advantage from Hamlin in order to give it to Busch. The fact that the move was allowed calls into question every move the championship drivers’ teammates make and whether it’s an intentional move to help win a title, even at the expense of a win for them.  And the last thing NASCAR needs is more questions surrounding an already questionable title format.