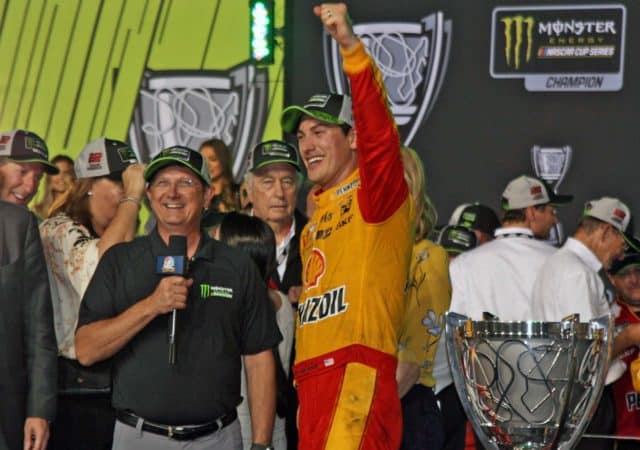 On Sunday at Homestead-Miami Speedway, Joey Logano took on the Big Three and won.  He was victorious not only in the race but also secured his first championship in the Monster Energy NASCAR Cup Series.  The title caps off a great season for Logano and a superb performance in NASCAR’s 10-race playoffs.  Three wins, 13 top fives and 26 top 10s across 36 races are championship-caliber numbers.

Yes, there are a few other drivers that had championship-caliber stats this year.  Kevin Harvick, Kyle Busch and Martin Truex Jr. got grouped into the Big Three for a reason.  Harvick and Busch, in particular, won early and often, each concluding the season with eight points-paying wins.  For a lot of fans, those eights in the win column for Busch and Harvick are going look questionable next to the three for Logano.  After all, NASCAR’s executives always say that the elimination-style playoffs reward winning above all else.  Therefore, how do we explain Logano winning the championship?

The reality is that the postseason has never placed the premium on winning that NASCAR claims it does.  Consistency is still an important component in determining the championship, and nobody has shown better consistency in the postseason than Logano.

Back in August, Logano got in an early incident at Watkins Glen International that left him with a 37th-place finish.  From that race on, Logano finished outside the top 15 only once.  That stretch of races, the last 14 of the season, included three short tracks, four 1.5-mile intermediates, fast, unrestricted speedways like Michigan and Indianapolis, a flat one-mile track, a high-banked one-mile track, a superspeedway, a road course and Darlington.  That is a pretty good cross-section of the NASCAR schedule and one that requires a driver to excel on a wide variety of tracks.

Logano may not have won until late in that stretch of races, but the No. 22 team was quietly building up its momentum while the spotlight was on other drivers.  The team’s one bad result, last week at ISM Raceway, did not even matter since Logano was already guaranteed a spot in the championship race.

In the 10 race playoffs, Logano recorded two wins, six top fives and eight top 10s.  Busch’s playoff results are very similar: two wins, five top fives and seven top 10s.  Harvick earned one win in the playoffs (which got penalized days later) and also earned seven top 10s.  Truex, still winless since his victory at Kentucky Speedway, finished the playoffs with five top fives and six top 10s.  When the championship was on the line, Logano was just as good as the Big Three and put the ultimate exclamation mark on his season by outrunning them all on Sunday.

The addition of the Charlotte ROVAL in the playoffs, as well as adding a short track race at Richmond Raceway, put new emphasis on versatility for this year’s championship battle.  Wins still mattered too – Logano’s championship hopes would have been in serious jeopardy without the Martinsville Speedway win in his back pocket.  But since Logano did not take as many playoff points into the postseason as some other contenders, his success depended on the No. 22 team’s ability to run well at lots of different venues.  Consider that Logano’s three wins came at the shortest track on the circuit, the longest, and at an intermediate.  What more could you ask of a championship team than to have a sampling of its wins, and its top 10s, cover so many types of tracks?

Consistency deserves to be rewarded.  NASCAR, of course, has spent the last 15 years treating consistency like a dirty word.  The point of the original Chase and every iteration of the playoffs since then has been to force drivers to race hard and step up their level of performance as the season winds down.  Logically, that would equate to the eventual champion winning lots of races in the playoffs.  Sometimes that exact scenario has happened.  Tony Stewart in 2011 is probably the best example.  But more often than not, the champion has been the driver who shows a strong level of performance across all the tracks in the postseason.

It is a trend that holds up even in the elimination-style playoffs.  Truex won four postseason races last year but earned nine top fives overall, arguably a more impressive feat.  Jimmie Johnson has long been the master of consistently-strong playoff performances.  In 2016, he only had two finishes worse than 12th during the playoffs when he earned his seventh championship.  The strength of Busch’s 2015 playoff performance was not his one win but his six top-five finishes.  And in 2014, Harvick had only one finish worse than 13th in his playoff results.  Yes, all those drivers won at Homestead to win the championship.  But it is no coincidence that the drivers who are able to win the most important race were the ones performing generally well at the time.

Maybe one day NASCAR will opt for a simpler approach and jack up the number of points awarded for winning a race relative to the other finishing positions.  But until that day comes, consistency will, rightfully, have an important role to play in who wins the championship, even in a playoff scenario.  The No. 22 team did not enjoy the big win seasons of Harvick, Busch or Truex, but NASCAR’s season is long.  Momentum shifts and timing is important.  It was Logano who mastered consistency and timing better than anyone else in this year’s playoffs.  That makes him a worthy competitor to hoist the championship trophy in 2018.

Some very good points made. When I think of consistency, Logano isn’t one of the driver that first comes to mind, but maybe he should be. In any event, he’s the champ this year, and with this bastardized playoff format, deserves it as much any anyone in the “big three”.