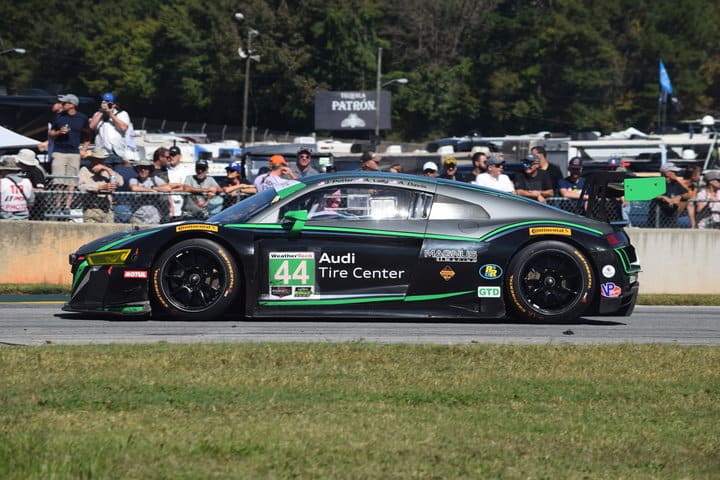 On Wednesday (Nov. 21), Magnus Racing revealed their racing itinerary for the 2019 season.  The team will be back full-time in the IMSA WeatherTech SportsCar Championship in the GT Daytona.  However, they will be trading in their Audi R8 LMS GT3 in favor of the new Lamborghini Huracán GT3 EVO.  Andy Lally and John Potter will once again drive the No. 44 full-time.

It’s great to move forward with everyone at Lamborghini Squadra Corse,” Potter stated in a press release.  “The performance of the Lamborghini over the past several seasons is well documented, and it will be nice to compete with them rather than against them in 2019. Since our first meeting, we’ve been remarkably impressed with the attention to customer service and clear communication, which instills a lot of confidence in the future of our working relationship. In particular, I’d really like to thank Giorgio Sanna (Head of Motorsport for Lamborghini Automobili) and Chris Ward (Senior Manager of Motorsport for Lamborghini Automobili) for being as responsive as they have, with an organization like ours it’s extremely refreshing.”

For Lally, 2019 will mark his seventh season driving for Magnus Racing.  He returned to the team in 2018 after spending a year as one of Acura’s factory drivers with then-Michael Shank Racing with Curb-Agajanian.  He’s intrigued about the new Huracán.

“Moving in to 2019 with Lamborghini is a great move forward for the team,” Lally stated.  “We’ve of course been driving against their cars for the last several years and they’ve had a great package, so I’m excited to finally get behind the wheel with next year’s EVO. There’s a lot to learn in a short amount of time, but we’re confident we can get up to speed quickly and regain the form we know we’re capable of.

Last season, there was only one Lamborghini Huracán on the grid for the full season in the IMSA WeatherTech SportsCar Championship.  That was the Paul Miller Racing Lamborghini shared by Bryan Sellers and Madison Snow that won the GT Daytona class championship.  For Lally and Potter in the sole full season Audi, they had an up and down year.  They ended up eighth in GT Daytona points with a best finish of second at Lime Rock in July.

The move to Lamborghini ends a three–year stretch with Audi for Magnus Racing.  The team switched to Audi for 2016 after racing the IMSA-exclusive Porsche 911 GT America for two seasons.  The team won the Rolex 24 at Daytona on debut with the Audi and added in a second win at Lime Rock.  However, the team ultimately left the series and went to Pirelli World Challenge for 2017 in the wake of Balance of Performance issues and a disqualification at VIR after the front splitter was found to be one millimeter too low.

In Pirelli World Challenge, the team did find some success, winning a SprintX race at Lime Rock and running competitively.  Despite that, they chose to return to IMSA.

The team did not announce their additional drivers for the endurance events.  They will be revealed at a later time.