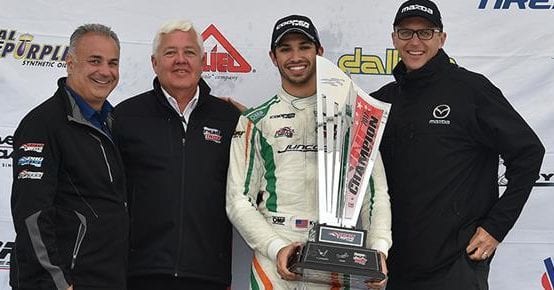 Juncos Racing announced Friday (Nov. 30) that part-time INDYCAR racer Kyle Kaiser will make his IMSA WeatherTech SportsCar Championship debut with the team in January’s Rolex 24 at Daytona.  The 22-year old racer will drive the No. 50 Cadillac DPi-V.R. alongside William Owen, who was announced earlier this week as the team’s first full-time IMSA driver for the 2019 season.

“I am excited to have the opportunity to compete in the Rolex 24 with Juncos Racing,” Kaiser stated in a press release.  “It’s very special to have my first experience in endurance racing at such a historic event with the organization I have been a part of for the last five years of my career. I have been impressed with the incredible progress the team has made over the last month preparing for the race, and I have the utmost confidence our program will be extremely competitive with the Cadillac power behind us. I am anxious to get behind the wheel of the DPi and continue our preparation for the race.”

Almost all of Kaiser’s racing experience is in open-wheeled racers, much of it coming with Juncos.  Most recently, Kaiser raced for Juncos Racing in INDYCAR, starting four races in the No. 32 that he shared with René Binder and Alfonso Celis Jr.  Kaiser’s best finish was a 16th at Long Beach in April.  This was tied for the team’s best finish of the year with a similar run at Barber Park for Binder.

Prior to his INDYCAR exploits, Kaiser ran three full years in Indy Lights.  There, he won five races and won the 2017 Indy Lights championship.  Kaiser’s time with the team dates back to his 2014 Pro Mazda season.

Juncos Racing’s No. 50 will be one of six Cadillac DPi-V.R.s scheduled to contest the full IMSA WeatherTech SportsCar Championship schedule.  They join the returning entries from Action Express Racing (two cars) and Wayne Taylor Racing (one car), along with the two new Cadillacs for JDC-Miller MotorSports.

Juncos Racing still has one full-season driver to announce for their IMSA team, in addition to another driver for the endurance races beyond Daytona.  Those announcements will be made at a later date.