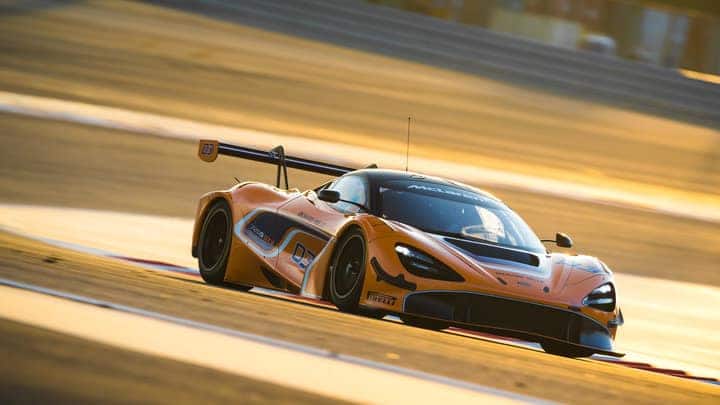 Compass Racing announced Monday (Dec. 3) that they will field a brand-new McLaren 720S GT3 in the IMSA WeatherTech Sprint Cup races in 2019.  Paul Holton and Matt Plumb, who have raced as teammates in the Continental Tire SportsCar Challenge for the past two seasons, will drive the new car.  The North American race debut for the new car will be at the WeatherTech Sprint Cup season opener at Mid-Ohio Sports Car Course on May 5.

“In developing a new car, driver continuity counts for a lot, and we are pleased to have Matt [Plumb] and Paul [Holton] working with us on our GT3 program,” stated Karl Thomson, owner and Team Principal of Compass Racing.  “We know the competition in WeatherTech is fierce, but we believe that 15 straight years of battling in the Michelin Pilot Challenge has prepared us for the fight.”

In Holton, the team has an official McLaren factory driver in the fold.  He’s quite confident in what the team will have at their disposal.

“The new GT3 car has been a real revelation in testing, and I can’t wait to get it out on track in North America,” Holton stated.  “McLaren has put together a great team of people in their new Motorsport facility in Woking, and we are all committed to being competitive from the very first race.”

As a McLaren factory driver, Holton was one of the lead drivers in the ongoing development of the 720S GT3.  In an exclusive interview with Frontstretch back in May at Lime Rock Park, Holton indicated that the testing program for the new car was supposed to be on both sides of the Atlantic Ocean.  Based on his statement above, the North American testing really hasn’t begun as of yet.  That said, Holton has spent plenty of time in Europe driving the car in anger.

In Plumb and Holton, Compass Racing is fielding the car for two drivers who really don’t have that much top-flite experience.  Holton has never started a race in the IMSA WeatherTech SportsCar Championship, the American Le Mans Series, or the Grand-AM Rolex Sports Car Series.

Plumb has one start since the ALMS/Grand-AM merger.  That was at Sebring in 2014, where Rum Bum Racing and Snow Racing fielded a joint entry in the GT Daytona class.  Driving a Porsche 911 GT America with his brother Hugh, Jan Heylen and Madison Snow, Plumb finished ninth in class.  Pre-merger, Plumb made 26 starts in the Rolex Sports Car Series, including a full season in a Daytona Prototype in 2008.  He had two podium finishes.  In 2004, he finished third in GT at Homestead in a Ferrari 360GT for JMB Racing USA.  During his full season in 2008 for Sigalsport, Plumb finished third at Mid-Ohio for his best run of the year.  A third podium finish in class in the 2013 Rolex 24 at Daytona went away when teammate Markus Winkelhock ran out of fuel on the final lap of the race.

For both drivers, much of their experience is in the Continental Tire SportsCar Challenge (now-Michelin Pilot Challenge).  Plumb is a two-time Grand Sport champion (a drive-time issue at Lime Rock in 2012 prevented a third) and the all-time GS wins leader with 20.  Holton has one career GS victory and a number of victories in Pirelli World Challenge.  He won the 2017 TC championship in an Audi RS3 LMS Club Sport.

Compass Racing is actually the first team to commit to racing the new 720S GT3 anywhere in the world in 2019.  Expect additional teams to sign on to race the car in Europe in the coming weeks.  McLaren is the first new manufacturer to enter the IMSA WeatherTech SportsCar Championship as a result of the new WeatherTech Sprint Cup championship-within-a-championship.

2019 will not be the first time that Compass Racing has competed in the IMSA WeatherTech SportsCar Championship.  In 2015, the team acquired an Audi R8 LMS GT3 and raced part-time in the GT Daytona class with Ray Mason and Pierre Kleinubing in the car.  The duo’s best runs were a pair of eighths at Lime Rock and VIR.

In 2018, Compass Racing fielded four full-time entries in the Continental Tire SportsCar Challenge (one Grand Sport and three TCR).  The team intends to return to the now-Michelin Pilot Challenge in 2019.  Announcements regarding those plans will come in the near future.