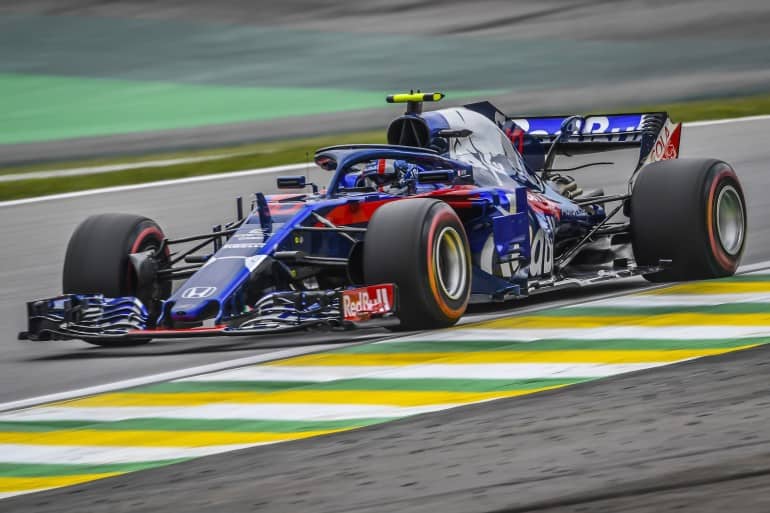 Pierre Gasly will be a reserve driver next year (credit: FIA images)

The beginning of the Formula 1 season brought some promise to the Toro Rosso team in preseason testing.  Having switched from a warmed-over Ferrari engine to Honda for the year – the same manufacturer that plagued McLaren for two seasons – Toro Rosso looked like they had found a good match.  Where McLaren had endured unreliable and slow performance, the Red Bull junior team appeared to have been given a much more steady and quick power unit.

The optimism, however, should be tempered by the fact that Toro Rosso is, in fact, still Toro Rosso.  That is to state that any sudden leap up the standings would have been surprising, especially as they had finished seventh in the standings for the previous four consecutive years.  That’s right, four years of finding the same spot in the pecking order on the grid, something that is, by all accounts, a definition of consistency.

The testing provided hope but the results for the season did not quite follow on the notion.

The first race, the Australian Grand Prix, showed what the team might just be in for, with results of 15th and a DNF.  There are a few things at play here. For starters, the team still had to adjust to the new engine and as history has shown any time an organization makes such a change, there will be some disappointing results.  The second aspect deals with the driver lineup. While both Pierre Gasly and Brendon Hartley returned from the 2017 season after being late additions, there was still question if they were the best-qualified drivers.

Toro Rosso had hoped to flush out the best of both their talents and thus find the next Sebastian Vettel, Daniel Ricciardo, or Max Verstappen.  They never were able to find such lofty comparisons for the two drivers. At times, either driver could surprise and bring home a decent result, but neither did so as a routine.  While the team is well aware of its status as the younger sibling to Red Bull, it still seeks to field and develop excellent drivers.

Of the two drivers, Pierre Gasly brought the organization some surprise finishes, with a notable high of fourth at the Bahrain GP.  He ended the season with five points-paying position finishes, which would be a realistic expectation for the team. In fact, even Hartley, who came over from the World Endurance driving, scored three points-paying finishes.  But they weren’t enough.

Perhaps the surprising thing was that when the team was running well, they showed that they had found something with the Honda engine that McLaren hadn’t.  From the fabled McLaren side of things, each race where Toro Rosso finished higher must have been particularly galling. The speed was there at times, but the team could never quite capitalize as they should have, which is probably down to one big issue.

While Toro Rosso may have found the speed McLaren hadn’t, they weren’t able to escape some of the reliability woes that had surrounded the Honda unit.  The team amassed 10 DNFs, which was the second most on the grid behind the likes of their kinship, Red Bull.

In addition, they never had both cars finish in the points at any race, which shows that the team in putting together a solid effort.  The common occurrence, other than accumulated DNFs, was for the drivers to finish between 11th and 14th. Something about these results says something is going to be different next year.

The team will be mixing things up again in 2019.  While they’ll remain with Honda, and will still embrace the kid sister role to Red Bull, the team will be bringing back the perplexing Daniil Kvyat and pairing him with Thai-British driver Alexander Albon.  Both drivers have previous relationships with Red Bull while Kvyat previously raced for both Red Bull and STR. Albon was dropped by Red Bull in 2012 but has continued to race and last year finished third in the F2 standings behind George Russell and Lando Norris, who will both be moving to F1 for 2019 with Williams and McLaren respectively.

The driver reboot is an interesting move but, really, for a team like Toro Rosso, things can only go up and already there should be an expectation that they finish the year back in their comfortable position of seventh.

Renault rejoined the ranks of F1 as a works manufacturer at the end of the 2015 calendar year and first raced again in 2016.  They suffered through the anticipated growing pains that year, having taken over the Lotus organization, and earned ninth place in the standings.  Such a lackluster result for an organization with the backing it has was a bit surprising but showed how far away the Lotus team had fallen

In 2017, with Nico Hulkenberg coming on board with Jolyon Palmer, the team started to show some progress.  However, the team ditched the underwhelming Palmer for Carlos Sainz Jr. with four races to go and established their driver lineup for the 2018 season.

With these two at the helm, the team made a significant leap, having scored 57 points before and finishing sixth, to earning 122 points and taking the fourth spot in the Constructors title.  The results show a notable jump in performance, both in speed and reliability, as the team moved from 12 DNFs in 2017 to 9 in 2018.

The two drivers looked to be a solid pairing and would have been a good backbone for 2019, with the tactical Hulkenberg finishing seventh and the hard-charging Sainz taking 10th. Change, however, is on the way.

Out of a possible 42 chances to finish in the points, the drivers earned 24, which is a rather solid result.  The two drivers found high marks of fifth, with Sainz doing so in Azerbaijan and Hulkenberg hitting the mark in Germany.  In addition, they finished in the points together on seven occasions. These finishes show a rather steady development for Renault and that they had clearly begun to find some performance as the re-established works team.

The performance in the second half of the year began to fall off, as the team dropped roughly two places on the finish as compared to their earlier results.  What is more striking, or disappointing, is that the team could never muster a podium finish. For the types of drives that Renault were getting, one might think they would luck into such a finish at least once but that was not the case.  A problem like that one shows either one of two things: 1) they had maximized everything they could out of the car and fifth was as high as they could ever get; or 2) the engineers in the pits failed to be aggressive in their strategies and were content with being decent.  For the team, being able to hang the proverbial hat on a podium finish over the winter always acts as a form of inspiration.

In addition, the team earned three DNFs in the last three races – one with Hulkenberg barrel rolling at Abu Dhabi – which complicates determining just where the performance stands with the team.  There is reason to believe the team is trending upward but the close to 2018 does not bring a heavy dose of confidence.

Because it is all the rage these days, the Renault Sport F1 Team will be rebranded as the Renault F1 Team.  What good this may do for anyone is up for debate but know that it has been done. The team has also announced that they expect to be bringing a completely new engine in the hope of catching Mercedes and Ferrari.  This area is exactly where one might think that a works team would shine assuming it has been in development for a while.

Then there is that other bit of change for 2019: Daniel Ricciardo makes the move to Renault.  In a surprise announcement in the middle of the year, the Australian driver announced that he would be leaving his spot at Red Bull to take on a ‘new challenge’ at Red Bull.  Many pundits questioned his move but it is a big coup for Renault and next year just might be when they challenge Ricciardo’s former team for podiums.

Its probably a bit unfair to slight Renault for a lack of podium finishes given the gap between Ferrari, Mercedes, and Red Bull to the rest of the snarling pack. That probably wont change in the near term.