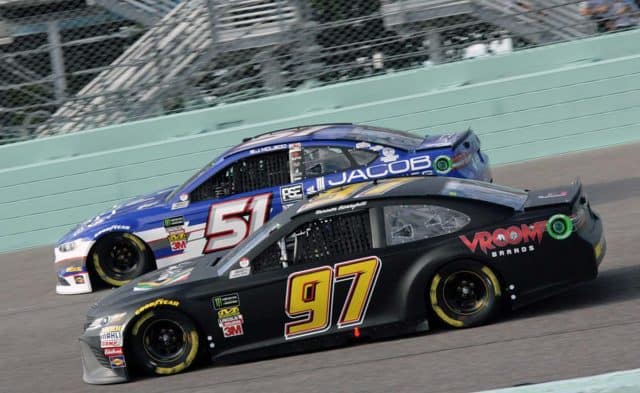 Obaika Racing has announced  the team will compete full-time in the 2019 Monster Energy NASCAR Cup Series with Tanner Berryhill behind the wheel of the No. 97 Toyota Camry. Berryhill made the announcement Monday (Dec. 3) during the SiriusXM NASCAR Radio show Late Shift.

Berryhill, a native of Bixby, Okla., ran two MENCS races for the team at the end of last season. He also made 40 starts in the NASCAR XFINITY Series from 2012 to 2014, posting a best finish of 17th. He drove for Vision Racing, Benny Gordon Motorsports and SR2 Motorsports before funding dried up in 2015.

Now, Berryhill gets a second chance at NASCAR.

“I am very thankful for the opportunities that Victor Obaika, the whole race team, and our partners are giving me, and I’m looking forward to making the most of it,” he said. “It’s a dream come true to be racing full-time again, and I’m excited to see this program continue to grow. Thank you to everyone who made this possible, and I’ll see you in Daytona!”

Obaika Racing, which has fielded entries in the XFINITY Series since 2015, made the jump to MENCS last season. They tallied three starts with Berryhill and David Starr driving, posting a best finish of 31st at Phoenix last month. Obaika and Berryhill will begin their first full-time season with the Daytona 500 on Feb. 17, 2019 at Daytona International Speedway.

“Tanner is a very intelligent and motivated young man, and I am very excited to what he can accomplish during his rookie season,” team owner Victor Obaika said. “The Obaika Racing team is working hard through the winter to put fast cars on track next year, and I have every confidence that Tanner is going to work hard to improve every race and get the most out of our equipment. 2019 is going to be a great year for this team.”

Sponsorship details will be announced at a later date.