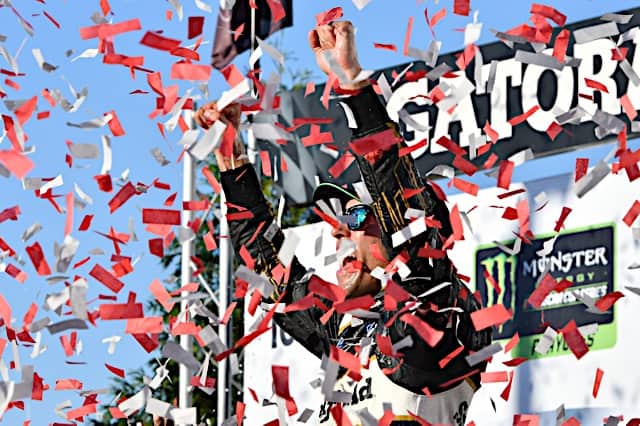 Swapping Danica Patrick for Aric Almirola was always going to be a step up for Stewart-Haas Racing, but few — including the team or even Almirola himself — could’ve anticipated something like this.

In February, Almirola strapped into SHR’s No. 10, a car that had seen diminishing returns since its inception, with Patrick landing no top fives and just seven top 10s in a five-year full-time tenure with the organization. The car seemed like the stepchild of SHR, the also-ran, the team that kept a lot of talented crew members employed but was never going to be a threat for the win each week. Was the No. 10 team receiving lesser equipment than, say, championship-contending efforts like the No. 4 and Kevin Harvick? Who knew? It wasn’t like there was someone else to which one could compare Patrick’s tenure, not until Almirola came along. It could just be the car.

Then he nearly won the Daytona 500.

Which could have, to be fair, been the highlight of his year. It was pretty much Austin Dillon’s, after all. Superspeedways have often been the great equalizer for NASCAR’s national series; hell, Patrick herself had some of her best runs there. Almirola leading at the white flag only to be punted by Dillon on the backstretch could have played out with just about any driver in the 40-car field.

Instead, that was far from Almirola’s high point of the season. Over the next few weeks, he was either in or around the top 10 at race’s end, save for a race-ending crash at Texas Motor Speedway that relegated him to 32nd. At the very least, Almirola proved early on that there was more in the No. 10 than Patrick was able to coax out — but again, this was expected. And it also came at a time when teammate Harvick had won three of the first four races of the season.

So, yes, good, but it was clear improvements could be made.

What ended up occurring was easily the most pleasant surprise of the 2018 season. After the checkered flag flew at Homestead-Miami Speedway, Almirola was fifth in the overall standings, having made the Cup playoffs by virtue of his points finish, not a regular season win. He scored career bests in a majority of major statistic categories, including top fives (four), top 10s (17), laps led (181), average finish (12.8) and lead-lap finishes (27). He also won his first race in four years, coming out on top in the fall visit to Talladega Superspeedway.

How would that not be an example of exceeding expectations? Unless you were expecting Almirola to suddenly vault the No. 10 onto the level of Harvick right off the bat (and if you were, boy, are you an optimist), the sky was pretty much the limit for the team in 2018. A win? Great. Playoffs? Awesome. Fifth-best at season’s end? Goodness. And for that matter, he barely missed out on making the Championship 4, scoring finishes of 11th, eighth and fourth in the Round of 8, nearly scoring the chance to win a championship for SHR. In his first year there.

Now, let’s dial back the praise a bit: Almirola wasn’t exceptional in 2018. He finished in the top five more than he ever had in a single season, but that was still just four times, and all of them happened during the second half of the season. He finished in the top 10 in less than half the season’s races, too, not quite a marker of excellence. That Talladega win was his only victory of the year, and it came in the waning weeks of 2018.

Oh, was he consistent, though. His 12.8 average finish was ninth best in the series in 2018, beating out a guy like Brad Keselowski, who had three wins, 12 top fives and 20 top 10s to his name in 2018. Almirola was rarely bad, and even when he wasn’t battling for a top 10, he wasn’t far from it. That’s what helped him into the playoffs in the first place.

Perhaps the best thing about Almirola’s season aside from his Talladega win and strong points finish? That there’s room for improvement in 2019. Like, think of it this way: he accomplished this in his first season with a team, crew chief and the like, and he still only snagged a grand total of four top fives all year. He won’t always have a Talladega win during the playoffs to fall back on, though, to slot him into the playoffs’ higher reaches. Wins during the regular season are imperative, and luckily for Almirola and co., they seem assumed in 2019.

And maybe that’s a problem. Perhaps now the expectations are too high, that a sophomore slump is possible akin to, say, Dale Earnhardt Jr.’s second season at Hendrick Motorsports. Almirola’s not exactly used to the pressure; he’s been an underdog practically his entire career.

How do you deal with that? How do you go from also-ran to potential championship contender with a simple move of teams, the stakes somehow suddenly higher than ever before? Was his better-than-expected performance in 2018 because he felt he had something to prove, and now that he’s done so, he’ll settle back into some kind of mundane monotony somewhere in between his 2018 results and those of Patrick’s seasons in the car?

Or is it more likely that he becomes a Martin Truex Jr.-esque late-career bloomer, now that he’s in equipment in which he can thrive?

Tough to say; Daytona’s still a ways away. But for the time being, as the year’s biggest surprise in the Cup ranks, Almirola can certainly hang his hat on the distinction of most improved driver.

Now to prove it wasn’t a fluke.

A good driver in a good car will win races (not “events”)!…etc

That car and team was always good. Tony wanted that car to succeed for the money go daddy was pouring into SHR. They just lacked a racer. The whiner wasn’t one.