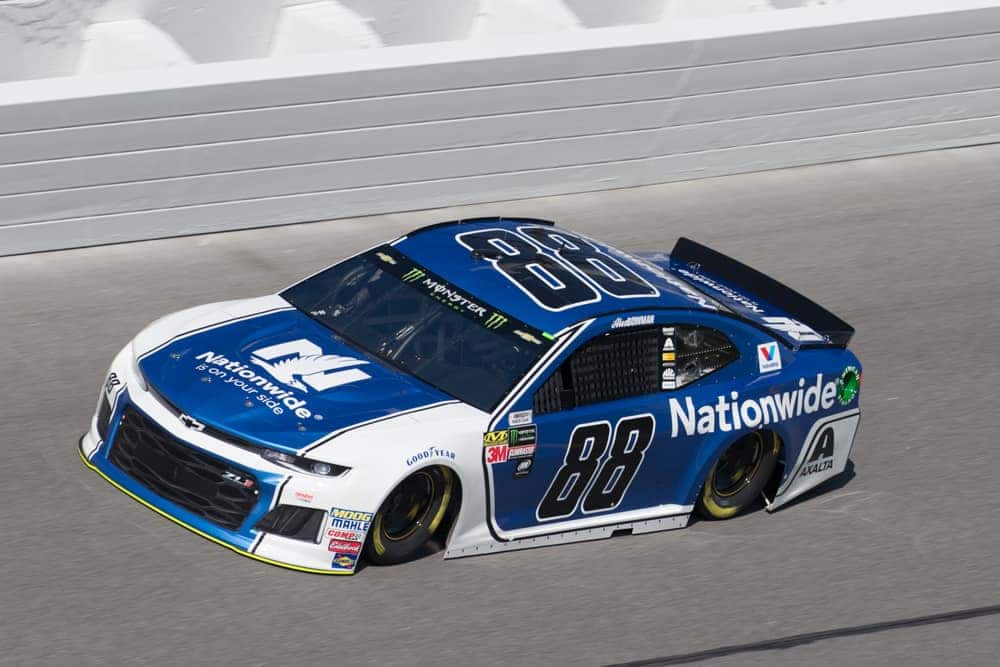 2018 was a season of progress for Alex Bowman and the No. 88 Hendrick Motorsports team in a year filled with change. For the first time since 2007, Dale Earnhardt Jr. was not a part of the organization and this season was about finding their way forward without him.

Bowman was named as the replacement for NASCAR’s Most Popular Driver midway through 2017. That left him months to prepare but little seat time considering those big shoes to fill; his last Monster Energy NASCAR Cup Series start came in November 2016. While Bowman’s first full-time effort in three years didn’t go exactly as planned, there were still some bright spots to build on.

The No. 88 team finished 21st in the standings in 2017 during Earnhardt’s retirement tour. With Chevrolet introducing a new body, Hendrick Motorsports was excited to get the season underway with the belief the organization would gain ground on the competition.

The Chevrolet Camaro made its debut during Speedweeks 2018. It was a sharp-looking design and the good vibes came early for the car when Bowman took the pole for the 60th Daytona 500. He edged out Denny Hamlin for the top spot and his excitement was readily apparent.

All eyes were on the No. 88 car as he led the field to the green flag. With the unpredictability of plate racing, Bowman finished in 17th position after getting involved in a late-race accident. Still, a solid Speedweeks led to optimism the year would go well.

But the pole was the lone highlight for the team as they struggled through the first part of the season. After the first five races, they had failed to register a top-10 finish.

It became apparent early in the season that the Chevrolet teams were behind, especially on mile-and-a-half racetracks. The new Camaro body style just didn’t work for teams most of the season. At one point, the manufacturer would go 20 races without a victory. That made any chance at a championship run almost impossible for Bowman and his team.

One of the strengths Hendrick Motorsports did have was their short track program. Bowman finished seventh and fifth in the first two short track races of the season: Martinsville and Bristol. Even though the team was struggling on the speedways, they were able to capitalize on the different variety of tracks. After an eighth-place finish at Talladega, Bowman found himself 12th in the standings and was the second-best Hendrick Motorsports car most of the year.

His top performance of the season came at tricky Pocono Raceway in Long Pond, Pa. in midsummer. Bowman finished in the third position and led some laps, putting ideas in people’s minds that maybe Hendrick Motorsports was about to turn a corner in the latter part of the year. Instead, the opposite would prove true. Bowman’s team struggled down the stretch with only one top-10 finish in the last five races of the regular season.

Still, Hendrick’s short track program and ability to capitalize on their strengths gave the team their first playoff berth since 2015. For a driver and team in their first year together, making the playoffs was a lofty goal and the team capitalized. Though the season didn’t go exactly how Bowman wanted it, the Tucson, Ariz. native was still confident heading into the playoffs.

The NASCAR postseason began at Las Vegas Motor Speedway, marking the track’s first playoff event. The team’s struggles on mile-and-a-half tracks continued as Bowman finished 19th. His 12th-place result at Richmond International Raceway gave the team a chance to advance, though as they headed into the ROVAL at Charlotte Motor Speedway.

It was the first ever race on Charlotte’s road course configuration and there were a lot of question marks leading into the event. Once again, Bowman and the No. 88 team came through on tracks where they needed to capitalize. He qualified third and ran strong all day, finishing a solid fourth. It was enough for the team to advance to round two of the playoffs, much to the delight of Bowman.

Pretty cool to advance to the next round of the playoffs. Bummed how that last restart panned out but we had a shot at it! Proud of my team, they brought a good car and we had awesome stops. On to Dover! #Bowman88 #RoundOf12 pic.twitter.com/qePIZnyTQY

The feel-good story was short-lived, however. Round two of the playoffs simply meant more inconsistency for the team. Accidents at both Dover and Talladega put Bowman in a win-or-go-home situation at Kansas, another mile-and-a-half track. Even though the team performed admirably, their ninth-place finish wasn’t enough to overcome the mishaps of the round. They were eliminated from playoff contention and forced to run the next four races outside of the championship hunt. Ultimately, Bowman wound up dead last of the 16 drivers who qualified for this year’s playoff.

It wasn’t the strong finish he was looking for. But Bowman still found a way to take some positivity out of the season.

In the final four races of the year, the team ran outside of the top 10 in every race, a surprising end to a rollercoaster season. There is certainly room for improvement for them although Bowman’s crew chief, Greg Ives, and their crew will return mostly intact.

Some challenges remain with this program. But with a new rule package in store for next season and the first year at Hendrick Motorsports under his belt, Bowman and the No. 88 team look to build on what went right entering the 2019 season.