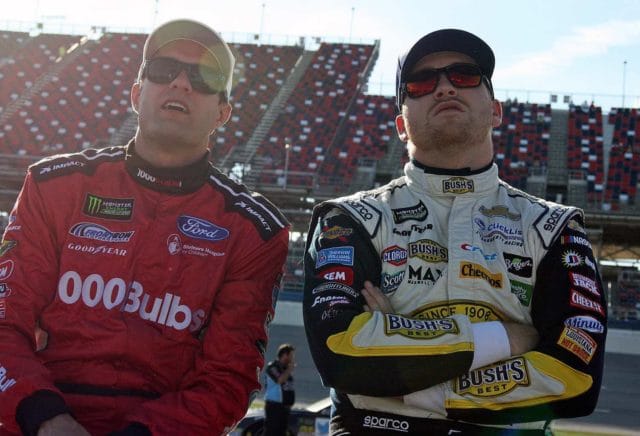 2018 was Chris Buescher’s third straight full-time season in the Monster Energy NASCAR Cup Series and his second with JTG Daugherty Racing. Buescher earned two top-five finishes during the 2018 season, the most since 2016 when he picked up his first and, so far, only career victory at Pocono Raceway. But other than those two top fives, there wasn’t much that stuck out this season for the Prosper, Texas native.

Buescher kicked off the season with a fifth-place finish in the Daytona 500. He worked with teammate AJ Allmendinger during the final stages of the race and kept his car near the front when the checkered flag flew. It was a boost of early momentum he hoped would carry over into the next race at Atlanta Motor Speedway.

It didn’t. Instead, the real meat of the start of 2018 saw Buescher leave a ton on the table. He finished 20th or worse six times before flirting with the top 10 again at Talladega in May. During the string of eight races between Daytona and Talladega, Buescher tallied just two 15th-place finishes (Las Vegas and Texas) but also posted his first DNF of the season at Bristol. He plummeted down the point standings and right out of playoff contention.

After a rather calm race at Talladega in May, Buescher stagnated. He joined many teams left in must-win situations for the Coke Zero Sugar 400 at Daytona in July. Buescher at least set himself up with some momentum leading into the next restrictor plate event. From Dover to Daytona, Buescher kept his car clean with only one DNF during that string of races (Kansas Speedway). Some improvement was starting to show, with Buescher finishing 17th at Pocono and 12th at Sonoma Raceway. Considering JTG Daugherty’s restrictor plate strength there was at least an outside chance for an upset.

During the final stages of the Coke Zero Sugar 400, Buescher was a contender for the race win. His push on the backstretch propelled Erik Jones to his first career victory and earned the No. 37 his second and final top-five finish of 2018.

This time, it felt like the momentum of a top-five result carried over. From Daytona to the cutoff race at Indianapolis Motor Speedway, Buescher finished 20th or better five times. We spoke with Buescher after his 13th-place finish at Darlington if he was confident about punching his playoff ticket at Indianapolis. Instead of feeling confident about one race, Buescher felt better about ending the season on a high note with solid momentum heading into 2019.

The No. 37 team failed to pick up the victory at Indianapolis, but it wouldn’t stop him from picking up the pace during the postseason. In the final 10 races, Buescher finished outside the top 25 only once (a 30th at Richmond Raceway). During that final stretch, he was listed as running at the finish during all 10 of those events. That put an exclamation mark on a new career-high statistic: completing 33 of 36 races.

Another career stat that Buescher came close on was lead-lap finishes. Buescher wound up on the lead lap 13 times, which was just one off of what he netted last season. His ability to stay that competitive in a down year is likely what kept him within the JTG Daugherty ranks. Teammate Allmendinger was released after five seasons with the team.

Buescher returns to the No. 37 Chevrolet team in 2019 with a new teammate in the form of rookie Ryan Preece. The organization will switch to Hendrick Motorsports engines, which could be a turning point for the organization and for both of their drivers.