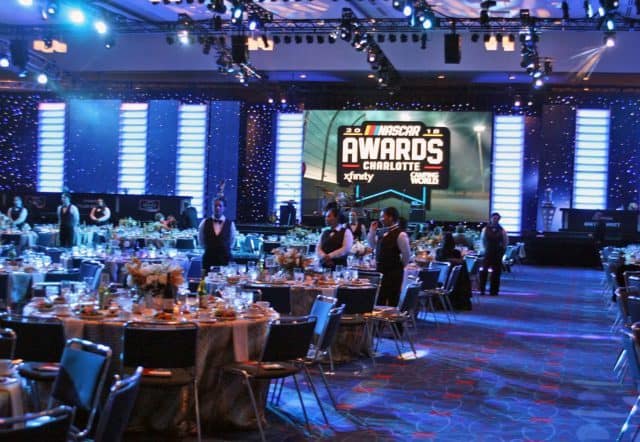 Both Moffitt and Reddick were joined by their championship-winning team at the head table on the stage. The drivers who finished second through fourth in each respective series also joined the party.

Both drivers held the underdog nametag during the season and both drivers came home with the championship. Reddick earned his way to Homestead via his victory at Daytona in the closest finish in NASCAR history while Moffitt earned his ticket with a victory at Atlanta.

Both drivers had to battle through their own type of adversity during the season and both proved that just a little rain wasn’t going to ruin their parades this season. Moffitt faced funding issues throughout the season and during some weeks leading into races, it was unknown on if the organization would arrive at the track on Friday to compete.

With a playoff spot locked in early, it gave the organization a reason to not give up and give up was exactly what they didn’t do. The organization made it to Homestead and earned the victory when it mattered and the season ended with Moffitt showing his ring off to the crowd in attendance on Saturday (Dec. 8th).

Reddick’s path to the championship was different. The victory at Daytona was about the only thing that went right for the organization from February to September. Crew Chief Dave Elenz denoted during his speech that they didn’t put things together very well during the summer months and when the team got to playoff time, they put their program together and started making that sneak attack for the championship.

During the final 10 races of the Xfinity Series season, Reddick finished inside the top 10 in every event besides at Las Vegas and Dover. In a time where regular-season championship contenders were struggling to make it past the first lap, Reddick continued his sneak attack on the championship, with the exception that it wasn’t a sneak attack when they arrived at Homestead.

He used the high line to his advantage and was able to earn his second victory of 2018 and the championship in the Xfinity Series.

The words “live long and prosper” were the final words that brought an end to the 2018 NASCAR Awards Banquet and the 2018 season. A season filled with hard racing, new identities, and many other aspects that made this season one of the best for both series.

With one book coming to a close, another book will be pulled from the shelf in exactly 60 days with Bush Clash practice at the Daytona International Speedway on February 7th, 2019.

I guess no one goes to the banquets for these Series either.

” the season ended with Moffitt showing his ring off to the crowd in attendance on Saturday.” Looks like the wait staff were the only “crowd” there LOL.