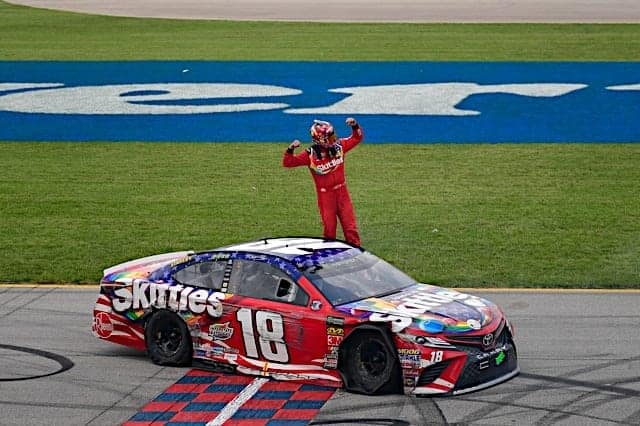 There are some years in a driver’s career that stand out about the rest, a year that a driver and a team will never forget. For Kyle Busch and his No. 18 Joe Gibbs Racing team, the 2018 season was just that, perhaps the best year of his career.

Busch came off a stellar season in 2017 in the Monster Energy NASCAR Cup Series, winning five races and finishing second in points. Since being paired with crew chief Adam Stevens, he’s finished in the top four in points every season. Entering 2018, more of the same was expected, but no one could have seen what was about to come.

Busch and co. started off the season well. He finished second in two of the three races on NASCAR’s West Coast Swing and didn’t slow down when the series came back East. Busch finished runner-up to Clint Bowyer at Martinsville Speedway and then proved to everyone that the No. 18 team was going to be a force throughout the year by winning three consecutive races at Texas Motor Speedway, Bristol Motor Speedway and Richmond Raceway. From that point forward, Busch established himself as one of the Big Three in the series, along with Kevin Harvick and Martin Truex Jr.

The Big Three later turned into the Big Two, as Truex started to fade a little bit as the summer months went on, but Busch kept his momentum going. He won the Coca-Cola 600 at Charlotte Motor Speedway, marking his first ever points win at the facility. By the season’s halfway point in July, Busch had five victories and was right on Harvick’s heels as a championship favorite.

There were many great moments throughout the 2018 season for Busch, but one that stands out above the rest is the Overton’s 400 at Chicagoland Speedway. Busch came into the event looking for as many points as possible; after all, he was in a heated duel with KHarvick for the No. 1 spot in the regular season standings.

Enter Kyle Larson. Larson’s season had not been what his team had hoped for, struggling for most of the season.  But this particular Sunday, the No. 42 team had found something in its racecar, and Larson found himself battling with Busch for the lead in the closing stages of the event.

Toward race’s end, Larson went to the bottom and tried to put a slide job on Busch but eventually made contact with the No. 18 car and pushed him into the outside wall. The damage on the No. 18 car wasn’t severe, but the contact was enough to let Larson by. As they entered Turn 3, however, Busch took no prisoners, driving in extra hard and making contact with the No. 42, sending Larson spinning, and Busch emerged the victor. It was an epic battle that led to one of the most memorable lines of the season, uttered by Busch: “If you don’t like that kind of racing, don’t even watch.”

The win at Chicagoland was Busch’s fifth of the season. He won again at Pocono Raceway, and as the Cup Series moved into the playoffs, Busch was still considered a championship favorite. He finished the regular season first in the standings, gaining an extra few points and tying Harvick with the most playoff points as the series headed to Las Vegas Motor Speedway.

He finished seventh at Las Vegas in a race that saw the No. 18 team lead just one lap. It was a little concerning, considering the championship race was at a 1.5-mile track similar to Las Vegas. For Busch and his team to get beat like that made people scratch their heads a bit. It was a sign of things to come.

But first, he won the following week at Richmond, sweeping the season there and earning his seventh win of the season. That victory allowed him to move to round two of the playoffs.

However, on the whole, throughout the playoffs Busch would perform well but it was clear the team had lost a little something from earlier in the year.

Busch and the team won one more time before Homestead-Miami Speedway, claiming their eight victory at the newly renovated ISM Raceway.

But at Homestead, it was more of the same; the team’s recent struggles on the 1.5-mile tracks proved fatal. The team never found the handle on the car all night long, and when the race concluded, he was three spots out of the championship, finishing in the fourth position.

Bummed for all of our guys, Adam Stevens n my guys did a phenomenal job. This @mmschocolate Camry team was really, really good – just not good enough on the night we wanted the most.

In the end, it was Busch’s failure to find speed on the speedways late in the season that was his downfall. There’s no doubt, however, with its recent consistency that the No. 18 team will be contenders once again entering the 2019 season. It’s only going to be a question of whether or not they can win it.