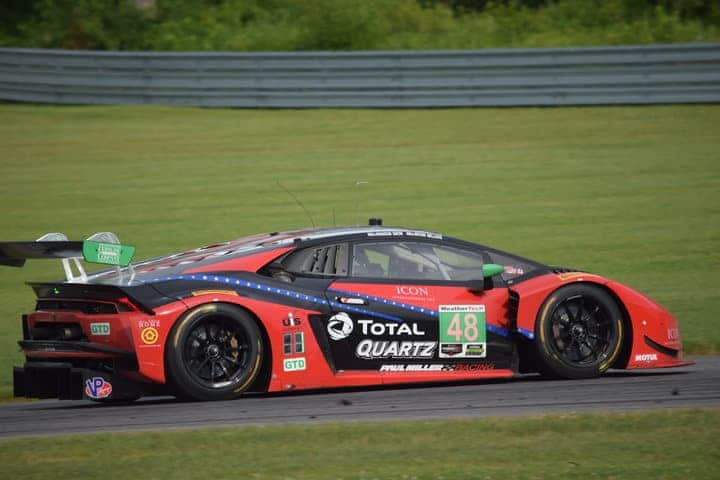 Paul Miller Racing announced their intentions to return to the IMSA WeatherTech SportsCar Championship full-time in 2019 on Monday (Dec. 10).  2018 GT Daytona champion Bryan Sellers will be back to defend his title with a new driver, Ryan Hardwick as his full-time teammate.  In addition, the team announced that Corey Lewis will return to the team for the endurance events.

The team’s Lamborghini Huracan GT3 EVO will have a different look in 2019.  The red and black colors from the past couple of years are likely to be traded in for light blue and some black.  Hardwick is bringing sponsorship to the team from 1st Phorm International, a company that produces and sells supplements designed to help users build muscle, lose weight and recover after workouts.

“I’m very honored to be returning to Paul Miller Racing for my fourth season.” Sellers stated.  “This will be a new program for us and I am extremely excited about pairing with Ryan Hardwick for the season.  I was able to watch him race in Super Trofeo last season, and his growth and commitment through the year was impressive.  He will be a great fit within our team.”

“I could not be more excited about moving up to the IMSA WeatherTech [SportsCar] Championship and joining Paul Miller Racing in 2019,” Hardwick said.  “When I started my journey into racing sports cars, my goal was to one day compete in IMSA. I am honored to have the opportunity to realize that goal by joining such an accomplished team with Paul Miller Racing.  I’m also extremely grateful for the opportunity to drive with, and learn from Bryan Sellers.  None of this would be possible without confidence that Mr. Miller and Lamborghini Squadra Corse have put in me, and I’m dedicated to helping defend their class championship from last season”

Hardwick comes to Paul Miller Racing after spending 2018 driving for Dream Racing Motorsport.  Hardwick raced a Lamborghini Huracan Super Trofeo in Pirelli World Challenge’s GT Cup class, however, racing there sadly didn’t give him much in the way of competition.  In addition, Hardwick has raced the last two seasons in Lamborghini Super Trofeo North America.  He is the current Am-class champion with five victories (Mid-Ohio No. 2, both Watkins Glen races, VIR No. 2 and Vallelunga No. 1).

Hardwick replaces Madison Snow, who has chosen to sit out the season and tend to his family business after being upgraded to a Gold driver ranking from IMSA.  That upgrade meant that he could not defend his championship from 2018 with Sellers and would have forced him to steer away from the business.