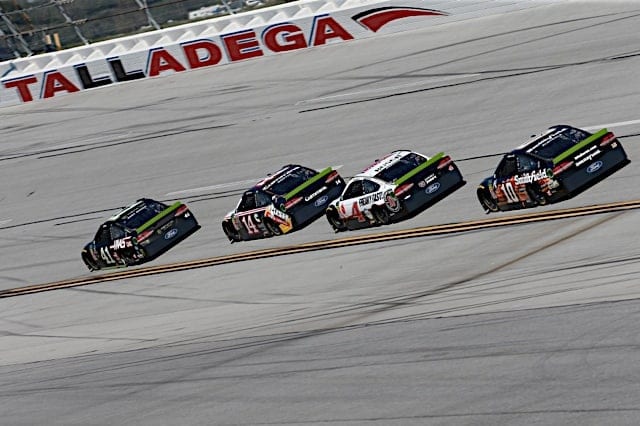 The dominance of the Blue Oval is back in NASCAR. For the first time since 2002, Ford took home the manufacturer’s title, finally grabbing it back from Toyota and Chevrolet.

In a year that saw struggles unlike any other season for the Bow Tie group, the Ford squad made sure to take advantage. With Roush Yates Engines under the hoods of the Fords, the group dominated the NASCAR season — capturing a Monster Energy NASCAR Cup championship with Team Penske’s Joey Logano and winning 19 of 36 races.

No one would have predicted Ford would dominant 2018 the way they did. Just a year prior, Ford only captured 10 wins.

From Stewart-Haas Racing to Team Penske, the Fords took advantage of Chevrolet’s struggles and out-raced the five Toyota drivers who had a shot at winning it all.

A combination of a great engine package, paired with perfect strategies and the right crew swaps over the off-season, led to one of the most successful seasons for the manufacturer in its NASCAR history.

Kevin Harvick started the year with three straight wins for SHR at Atlanta Motor Speedway, Las Vegas Motor Speedway and ISM Raceway at Phoenix. Shockingly, he wasn’t the only Ford driver to win three in a row in 2018. Harvick’s eight wins led all of NASCAR, and his 29 top 10s were a career high.

Brad Keselowski repeated Harvick’s dominating stretch, earning triumphs at Darlington Raceway, Indianapolis Motor Speedway and Las Vegas. The three-win streak easily locked the No. 2 team into the playoffs. But more importantly, it showed that Team Penske, which only had one win with Logano at Talladega Superspeedway in April, could still get the job done.

With Penske’s expansion to three cars, the pressure was on Ryan Blaney to succeed and for veterans Logano and Keselowski to continue their winning ways. In the past, Penske struggled with three cars, and it seemed like that was happening in 2018. But once the “big three” of Harvick, Martin Truex Jr. and Kyle Busch cooled off, Penske pounced to the front.

Consistency truly helped Penske in 2018. They didn’t get worried when Keselowski and Blaney didn’t win races after Logano did. Instead, they used it as a motivator.

Penske’s three-car squad took their time to get things right. Unlike SHR, they didn’t win early and often. Instead, they did it in the second half of the year, when it counted the most.

From Keselowski’s sudden win streak to Blaney’s out-of-nowhere win at the Charlotte Motor Speedway ROVAL, Penske finally showed the speed that SHR did. Most of all, it came at a time when the Toyota squad was cooling off and the Chevys still couldn’t find speed.

The timing was perfect, especially for Logano.

Logano’s year was already considered much better than 2017 simply because he was locked into the playoffs early on and there was no controversy surrounding his triumph. Once the playoffs arrived, the No. 22 team was on cruise control.

He led 80 or more laps in three playoff races, winning at Martinsville Speedway and then Homestead-Miami Speedway to capture his first Cup championship and the first for Ford since Kurt Busch’s 2004 victory. Logano’s consistency was impeccable, earning six top fives and eight top 10s during the playoffs. While he might not have always been the fastest car, he and crew chief Todd Gordon positioned themselves in the right places at the right times.

Everyone at SHR expected growing pains when the team swapped over from Chevrolet to Ford last year. But no one could foresee the unbelievable 2018 season the team would have.

Each of the team’s four drivers earned at least one win, including the re-emergence of Clint Bowyer as a title contender. Bowyer earned a pair of wins during the first half of the year at Martinsville and Michigan International Speedway, exemplifying a level of confidence he hasn’t had in years.

While Bowyer might’ve finished 12th in the standings, the lowest out of SHR’s cars, he had a stellar regular season and one that the No. 14 team hasn’t seen since owner Tony Stewart won three races in 2012.

Even Aric Almirola, who was a mid-pack driver for most of his Cup career until 2018, took home a win. Not only did Almirola enter Victory Lane at Talladega in October, but he nearly tripled his career-best in top 10s, earning 17 on the year. Johnny Klausmeier had never served as a full-time crew chief in NASCAR, but made his rookie season count.

Almirola’s impressive year ended with a fifth-place finish in the standings. His emergence as a top-tier contender gave SHR four strong entries week in and week out. Most of all, with all four cars running up front during the playoffs, it enabled them to lean off each other and perform even better.

The final driver in SHR’s star-studded lineup was Busch, who had one of his best seasons at NASCAR’s premier level at the wry age of 39. Busch earned a career-high 22 top 10s, leading 644 laps — the 10th time in his career he’s led over 600 markers in a season.

Busch was incredibly consistent in 2018, but lacked speed for the first portion of the season. More often than not, he took a 15th-place car into the top 10 until they finally heated up during the summer months, winning the Bristol Motor Speedway night race.

While two Ford teams were winning left and right, there were a few that under-performed, including Roush Fenway Racing and Wood Brothers Racing.

By the 11th race of the year, Roush’s struggles were so obvious that the team opted to pull Trevor Bayne from the seat of the No. 6 car for the majority of the rest of the season and replace him with veteran Matt Kenseth. Kenseth managed to run about an average of four spots better than Bayne in his time with Roush, but still failed to bring the consistency that the other Ford teams had.

Ricky Stenhouse Jr. also failed to win in 2018 after a stunning multi-win season the year before. The two-car team didn’t have speed close to the likes of SHR and Penske, raising eyebrows as to whether or not major changes need to be made over there. In 2019, Ryan Newman will pilot the No. 6 car, but he can only do so much if Roush doesn’t start getting more help from the other Ford teams.

The same can be said about the No. 21 squad. Paul Menard had moments of brightness in 2018, earning seven top 10s, his most since 2014. But his statistics were nowhere close to the numbers Blaney had with the team in 2017, when he won a race and earned 14 top 10s.

There is certainly a divide between the top-tier teams at Ford and the mid-tier ones. But the Ford executives have to be extremely happy.

The 2018 season was a massive success for Ford, but there are changes coming to the Blue Oval in 2019.

Ford will utilize the Mustang in Cup Series competition next year, similar to the one used in the NASCAR Xfinity Series. The work now begins on preventing a massive descent, just like the one Chevrolet had in 2018 when it switched to the Camaro. If Ford teams can pick up with the Mustang where they left off with the Fusion body, the competition better watch out.