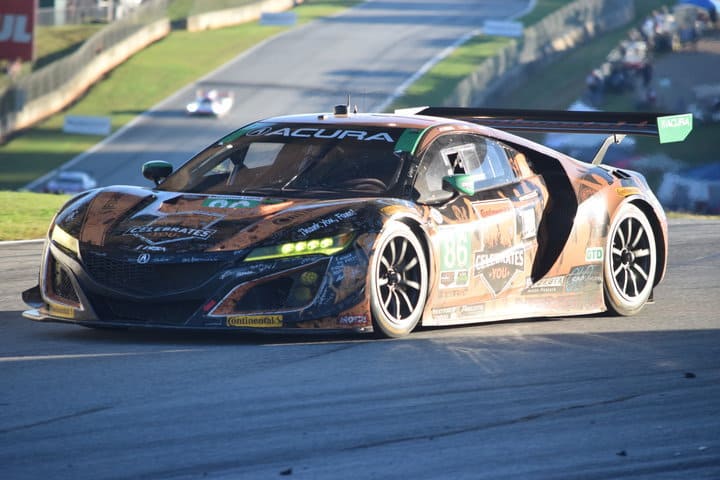 Meyer Shank Racing revealed the driver lineup for their No. 86 Acura NSX GT3 Evo Tuesday morning (Dec. 11) that will compete full-time in the IMSA WeatherTech SportsCar Championship’s GT Daytona class.  It is a collection of returning drivers in new roles.

Trent Hindman and Mario Farnbacher will share the Acura full-time and race for the GT Daytona championship.  They will be joined in the four Michelin Endurance Cup races by Justin Marks.  Finally, for the Rolex 24 at Daytona, AJ Allmendinger will return to the team for another go-around.

“It’s been five years of scrapping in GS, Super Trofeo, and various other categories to finally be in a position to run in the IMSA WeatherTech Championship full time,” Hindman stated in a press release.  “This is absolutely a dream come true and I owe the world to Mike [Shank] and the entire Meyer Shank Racing team for the opportunity of a lifetime.  This is a team that I’ve come to grow very close with in my role in the endurance races in 2018. Now, seeing where we will be in 2019, makes me even more grateful to be working with this group. I am honored and I am thankful to be driving an MSR prepared Acura NSX GT3 Evo for 2019 in phenomenal company.”

Hindman will be a busy man in 2019.  The ride with Meyer Shank Racing comes in addition to his full-time ride with Park Place Motorsports in the IMSA Michelin Pilot Challenge.  In 2018, he drove the No. 86 in three races (Daytona, Sebring and Road Atlanta).  He finished second in class at both Daytona and Road Atlanta for his best runs of the year.  In the now-former Continental Tire SportsCar Challenge, Hindman and teammate Alan Brynjolfsson finished ninth in points with a victory at Road America and three top five finishes.

For Farnbacher, he’s quite pleased to able to drive a full season in the Acura.

“I am super happy to be back with MSR and then to drive the full season is a mega bonus,” Farnbacher stated.  “I am so happy and thankful for this opportunity. The Acura NSX GT3 is a great platform, and I am convinced the Evo will be a really competitive ride for 2019. I will definitely do my best, like I always do, to be successful in 2019 with MSR and my teammates and I can’t wait for the season to star.”

Farnbacher drove in seven IMSA WeatherTech SportsCar Championship races in 2018.  Five of those were for Meyer Shank Racing (he was the only driver to race both Shank Acuras), while the other two were with 3GT Racing.  He won at Belle Isle Park with Katherine Legge in the No. 86 and had four top five finishes.  His weakest races were the endurance events.  Sebring was the only race longer than 10 hours in length in which Farnbacher finished in the top 10 in class.

For Marks, he’s beginning to wind his career down.  He ended his NASCAR career after competing in the Monster Energy NASCAR Cup and Xfinity Series races at Charlotte Motor Speedway’s ROVAL.  Marks believes that a part-time schedule, similar to what he ran in 2017 with Turner Motorsport. will allow him to take care of some unfinished business.

Marks shared the No. 93 Acura for Meyer Shank Racing full-time in 2018 with Lawson Aschenbach.  Together, the two drivers finished ninth in points with a second-place finish (behind Legge and Farnbacher) at Belle Isle Park being their best run of the year.  Marks and Aschenbach struggled at times, failing to finish four of the 11 races (two due to wrecks).

Finally, there’s Allmendinger.  At the end of the Monster Energy NASCAR Cup Series season, he was out of a ride and walking into the unknown.  He said after the race that he had no ride locked down for anything in 2019.  For now, the Rolex 24 at Daytona will be his only racing activity of the year.

“This race will always be more special than most,” Allmendinger said.  “The prestige of the Rolex 24 hour race doesn’t compare to anything else – Daytona, all the great drivers that have raced in it and won, past and present. To have my name a part of that list is a great honor to me, but what truly will always make it more special is racing with MSR and Mike (Shank) himself. I’m pumped to give it a go with him again to try and get our second Rolex victory.”

For Allmendinger, this will be his 13th Rolex 24 at Daytona, all with Shank.  He won overall in 2012 with the late Justin Wilson, John Pew and Oswaldo Negri Jr. and finished third in 2013.  This past January, he finished second with Hindman, Legge and Àlvaro Parente.  He’s hoping to do one better in January.