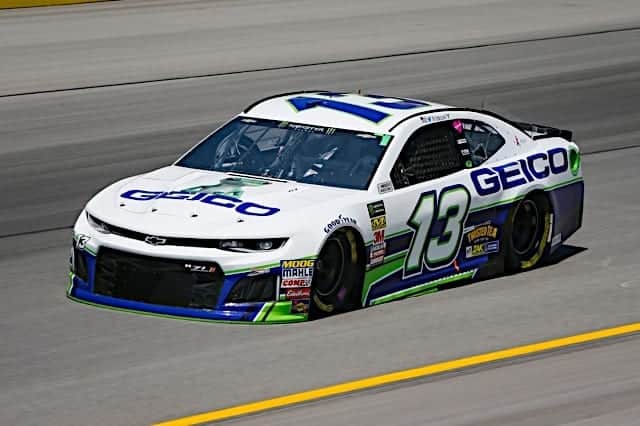 If there one thing missing for Ty Dillon in 2018, it was speed, something Dillon himself was vocal about.

Entering his sophomore season, Dillon hopped to improve upon his rookie numbers from 2017 and avoid a slump. Even with an alliance with Richard Childress Racing, Dillon and his small single-car Germain Racing team had to nurse the growing pains of the new Camaro ZL1 body style that was introduced to the Monster Energy NASCAR Cup Series this year, something that the Chevrolet camp as a whole struggled immensely with.

However, the season got started on a high note… of the race track. During Daytona speed weeks, longtime Germain Racing sponsor Geico announced that the extended their partnership with Dillon and the team until 2020. The 26-year-old watched big brother Austin Dillon capture the checkered flag in the Daytona 500. To celebrate the victory, Ty went to victory lane and stood in the same place that he and Austin stood 20 years earlier when their grandfather Richard Childress’ driver Dale Earnhardt won his lone Daytona 500.

Unfortunately for the younger Dillon was caught up in an early nine-car pileup on lap 61 of the Daytona 500 and was relegated to a 39th place finish. Through the west coast season, the Germain team looked to build consistency, but only had a best finish of 24th at Las Vegas Motor Speedway.

However, Dillon and the Germain team found a spark at Texas Motor Speedway. Dillon ran inside the top 15 for most of the day and came home in the position matching his car number; 13th. The momentum from Texas continued for the next several weeks, scoring top 20 finishes at Richmond Raceway and Talladega Superspeedway.

After a DNF at Kansas Speedway, the Germain team found some brief consistency. Top 25 finishes came calling in the three races after the All Star break, but a finish outside of the top 30 at Sonoma Raceway derailed the streak.

To begin the run to the playoffs, Dillon looked to have a strong run at the July race at Daytona International Speedway. With restrictor plates equalizing the competition for small teams like Germain, Dillon capitalized, but not without adversity. The Lewisville, North Carolina overcame numerous hurdles including a fuel pressure issue to be in contention to win the race in the final laps. At the end of the day, Dillon lead three laps and his Chevrolet ultimately crossed the finish line in the 6th position. The result was Dillon’s career best finish and was Germain Racing’s best finish since Casey Mears’ 4th place result in that very race back in 2014.

Things that happened to @tydillon at Daytona…

1. Fuel pressure issue coming to the green for Stage 2
2. Sustained splitter damage in the first “Big One"…and the second
3. Flat tire on the overtime restart
4. Overcame it all to finish sixth in the #GEICOMilitary Camaro ZL1! pic.twitter.com/b6LW6aNk27

However, Dillon struggled to back up his Daytona performance. After Daytona, Dillon did not score a single top 20 finish until the playoffs. This streak was capped off by a bizarre accident at Michigan International Speedway that resulted in a DNF. While being passed by Martin Truex Jr, Dillon’s car appeared to strike a large mysterious object in the secondary lane, which destroyed the front end of his Chevrolet, catapulting him into the outside wall. This freak accident, which was later deemed to be caused by a battery that came loose from Timmy Hill‘s Toyota, summed up Dillon’s run toward the playoffs, despite a trio of consecutive 21st place results to close out the regular season.

During the playoffs, Dillon’s performance improved compared to the regular season. In the first four races of the playoffs, Dillon had three finishes outside of the top 25, but closed the season with an average finish of 19.67 in the last six races, including a pair of 15th place finishes at Talladega Superspeedway and Texas Motor Speedway.

Despite the late improvements, Dillon left a lot on the table this season. Comparing his rookie season in 2017 to 2018, Dillon saw over a 10 percent drop in average finish, an increase of DNFs, and a significant drop off in laps led. Yet, there are plenty of positives Dillon can take away from 2018, including scoring his first top 10 finish.

In just two years of full-time competition at Germain Racing, Dillon has brought success to the small team. Dillon has the best average finish of any driver in Germain Racing’s ten-year history. Next season, Dillon returns to the seat of the No. 13, and hopes to capture consistency and more speed next year. With one season with the new Chevrolet body style under their belts, Germain Racing hopes to use their alliance with Richard Childress Racing to get more competitive in 2019.