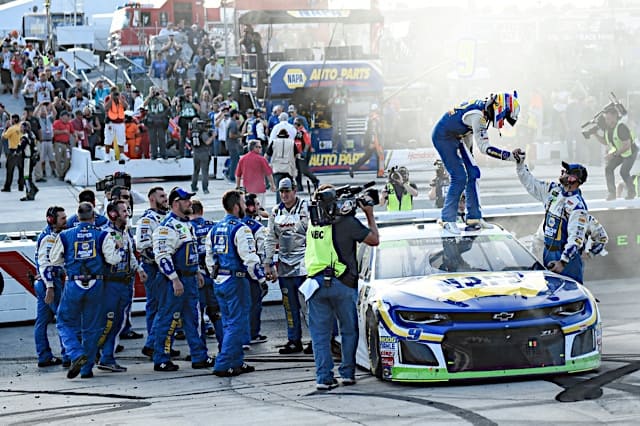 For Chase Elliott, the goal entering the 2018 season was no different than it had been for either of his prior two full-time years in the Monster Energy NASCAR Cup Series. The second generation star wanted to reach Victory Lane for the first time.

But even more than that, it seemed he had to win. Elliott racked up 22 top-five finishes in those first two seasons, yet all of them were in a position from second to fifth. No wins.

Elliott swapped his car number from 24 to 9 prior to the 2018 season. The No. 24 held a great deal of significance to the Hendrick Motorsports team, as it adorned the roof and door of Jeff Gordon’s cars for each and every one of his 93 wins. But No. 9 has a more personal meaning to Elliott. It was the number that his father, 1988 Cup champion Bill Elliott, carried to his first-career Cup win while driving for Harry Melling in 1983.

Elliott began the year in a bit of a funk. He was involved in a crash during the season-opening Daytona 500, as well as the third race of the year at Las Vegas Motor Speedway. In fact, the first eight races of 2018 saw only one finish better than ninth, and three races that ended with the NAPA Chevrolet 29th or lower on the rundown.

The ninth race at Richmond Raceway brought both a second-place start and runner-up finish, sparking a run of eight consecutive runs of 12th or better for Elliott. But still the maiden victory eluded him. He earned the pole position for the July race at Daytona, but an early crash left him in 34th at the end.

The stars finally aligned on Aug. 5th at Watkins Glen International. Starting third, Elliott led twice for 52 laps. As the race neared the finish, the then 22-year-old from Dawsonville, GA, had to hold off a spirited charge from defending series champion Martin Truex Jr. The No. 78 car was able to close the gap between himself and Elliott’s Chevy, but couldn’t find a way past, eventually running out of gas on the final lap. Elliott led the final 34 laps and would finally score his highly-anticipated first win, much to the delight of the sell-out crowd in attendance and his crowd of supporters back in his hometown.

Wow. Really cool welcome home last night. Thanks to all the people around Dawsonville that came out. Had a lot of my closest supporters out there. Can’t thank you guys enough ?? pic.twitter.com/5dHuF2LdJf

With the proverbial monkey off his back, the No. 9 team continued its consistent presence near the front of the pack. Top five finishes were the norm, as Elliott finished ninth or better in all but four races over the entire second half of the season.

While Elliott had to wait 99 races to score his first win, he only needed eight more to pick up his second. Elliott took advantage of a miscue by Aric Almirola‘s team to claim the win at Dover International Speedway during the Round of 12. The victory ensured Elliott would advance to the Round of 8 in the playoffs. As other drivers were eliminated, he would be the last Chevrolet driver eligible to win the championship.

What an incredible day! Great to get a W in the #NASCARPlayoffs and move to the next round. We hope to keep this momentum going #di9 pic.twitter.com/ldzwkU5eOz

Two weeks later, Elliott struck again at Kansas Speedway. As other drivers fell by the wayside when their various pit strategies didn’t play out to their advantage, Elliott took over the top spot with 44 laps remaining and never relinquished it. The victory made him the first driver since Carl Edwards in 2005 to earn his first three Cup wins in the same season.

After scoring finishes of sixth and seventh in the first two races of the Round of 8, Elliott headed to ISM Raceway in Phoenix, AZ, with an opportunity to grab a spot in the Championship 4 at Homestead. The No. 9 Chevy ran up front throughout the race, but on a lap 269 restart, there was a crash on the backstretch and Elliott couldn’t avoid it. The damage to his car left him mired in 23rd at the conclusion of the race. More significantly, he left ISM Raceway fifth in the standings. There would be no championship for Dawsonville’s most famous son.

However, it’s hard to consider the year a disappointment for Elliott and his team. Finally breaking through to get not just one win, but three, certainly eased the sting of not being in contention for the title at the end of 2018. However, Elliott did manage to lay claim to his first Most Popular Driver award.

Just a huge thanks to all of you for voting for me for MPD, an honor to keep it in my family after all these years of Dales success with the award. But like I said, votes aside… the fire y’all had for us at track this year was second to none. That means the most, thank you!

It’s likely that the many fans who enjoyed seeing his first three triumphs this year will be treated to more in the near future. With his consistency and ability to contend for wins on any type of track, Elliott will almost certainly be in contention for title once again in 2019.