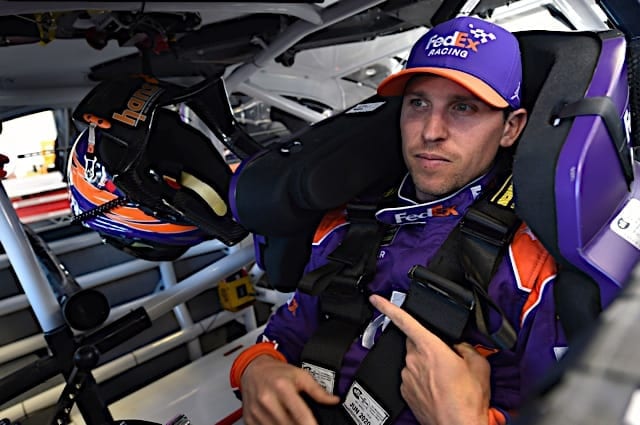 More than a few drivers would have liked to have had Denny Hamlin’s 2018 MENCS season. He finished in the top five in over a quarter of the season’s races, earning top 10s in nearly half of them. Those are respectable numbers.  But other aspects of 2018 were very un-Hamlin-like, particularly that goose egg in the win column.

In his 12 previous full-time seasons at NASCAR’s highest level, Hamlin had never failed to win a race.  Even in his injury-plagued 2013 campaign, he scooped up a win in the year’s final event, ending a dreadful season on a positive note.  Given this history, it felt like Hamlin would eventually get one or two races to fall his way.  However, the No. 11 team seemed just a little bit off all year, and Hamlin was never quite able to match his standard of performance from the last three seasons.

Sure, Hamlin came close to winning a few times, including in the Daytona 500.  He wound up third in a close finish with Bubba Wallace, where both drivers crossed the finish line side-by-side.  Wallace, who had been pushed into the outside wall by the No. 11, confronted Hamlin after the race.  The two drivers had a heated exchange, but any ill will between the two of them did not spill onto the track in later races.

And speaking of later races, Hamlin looked strong in the early part of the season.  He earned top-five finishes in four of the first five races.  Hamlin also had a good run going at Martinsville Speedway in March, but nose damage late in the race dropped him outside the top 10 by the time the checkered flag fell.  Still, he had reason to be confident about 2018, and he looked almost on par with Joe Gibbs Racing teammate Kyle Busch.

That situation had changed by the end of April.  Busch reeled off three wins in a row and established himself as Kevin Harvick’s biggest championship threat, if not the championship favorite himself.  Busch’s first win came at Texas Motor Speedway, in the same race where Hamlin got loose in Turn 3, slid up the track into Aric Almirola, and set off a multi-car crash that left the No. 11 team with a 34th place result.

But other than that misstep, Hamlin kept plugging along, turning in plenty of top fives and top 10s.  The month of May was especially good to Hamlin, who swept the top 10 in three points-paying MENCS events plus the All-Star Race.  His best result of those races was a third-place run in the Coca-Cola 600.  Yet even in that race, Hamlin had nothing for Busch, who was in his own zip code the whole evening and drove off to a dominant win.

Hamlin’s performances in the late spring demonstrated his season-long conundrum.  The No. 11 team had enough speed to run well on just about any type of track.  Yet Hamlin and crew chief Mike Wheeler never had the number one dominant car in any race in 2018, not even once.  It was not a case of Hamlin running poorly overall.  He was in great shape to make the playoffs on points by the time June rolled around, but there was no sign that the No. 11 team was about to take that next step forward, bust the door down and start winning races like Busch, even as the postseason drew closer.

If anything, Hamlin got worse over the summer.  In the 12 races following the Coca-Cola 600, he failed to score a single top-five finish.  While he did win a stage at Sonoma Raceway, he did not lead laps frequently in any of those races.  Hamlin reaching Victory Lane in 2018 was quickly becoming a matter of if, not when.

Even the No. 11 team’s qualifying ability, perhaps its greatest strength, cast light on Hamlin’s lack of raw speed on race day.  In a string of six races beginning at New Hampshire Motor Speedway and ending at Darlington Raceway, Hamlin won three poles and qualified no worse than seventh.  But when those races began, he would only show speed early on before fading back into the pack.  His finishes still were not bad overall.  Hamlin swept the top 15 in all six of those races, and that consistency clinched his spot into the playoffs.  Yet with so few playoff points to his name, he would need to find a way to win in the postseason in order to compete for the championship.

During the last week of the regular season, Hamlin almost got a long-awaited win at Indianapolis Motor Speedway.  After running well all day, Hamlin took the lead on lap 143 when Brad Keselowski pitted from the top spot.  Seconds later, NASCAR threw a caution for debris on the frontstretch.  When the race resumed with 12 laps to go, Hamlin pulled away from everyone and had victory in his sights.  But with only seven circuits left, Landon Cassill and Jeffrey Earnhardt had a jarring crash that brought out another yellow flag.

Hamlin still had the lead, but Keselowski was set to restart just behind him with fresher tires.  When the race went green again, the No. 2 car immediately took second and began tailing Hamlin.  With just over one lap left, the Keselowski slipped by the No. 11 and drove off to win.  Hamlin faded to third and ended the regular season with only three playoff points.  Frustrated by the loss, Hamlin thanked his team on social media but made some unfortunate comments on TV about how “meaningless guys in the back” cost him the race.

This one hurt. Hurt bad. Can’t thank my whole team on the road and shop for making this car so fast. Team, pitcrew, CC all were perfect today. Hopefully this is a sign of things to come. Let’s make a run…

Unfortunately for Hamlin, more frustration was in store for him during the playoffs.  He was one of several championship hopefuls to crash at Las Vegas Motor Speedway, but it was the following week at Richmond Raceway that truly encapsulated the No. 11 team’s woes in 2018.  Despite qualifying on the outside pole, Hamlin ran well early but nearly got spun by Ricky Stenhouse Jr.  Hamlin saved the car but flat-spotted his tires, forcing him to pit out of sequence.  Although he clawed his way back into the top 10 by the end of the first stage, he missed out on stage points completely in the second stage.  Little by little, the No. 11 car looked progressively slower as the race wore on, and Hamlin had to settle for 16th.

The resulting points deficit, 29 below the cutoff, proved to be too much.  After placing 12th at The ROVAL, Hamlin was eliminated in the first round of the playoffs for the first time in his career.  The rest of his season did have some positive moments, including a hard-fought second place at Dover International Speedway.  Hamlin also had another good run at Martinsville and nearly stole the win when Joey Logano and Martin Truex Jr. began slamming into each other on the final lap.

Two weeks later at ISM Raceway, Hamlin was in the center of a multi-car crash that wiped out several title contenders.  Fighting with Kurt Busch for the race lead, Hamlin got loose and forced the No. 41 into the outside wall off of Turn 2.  When Busch pushed back against Hamlin, they both spun across the track and collected several other racers, including Chase Elliott.  For some fans, the accident brought back memories of Hamlin’s run-in with Elliott in Phoenix last year.

Dear @chaseelliott . You sure have some passionate fans. Delusional, but passionate none the less. Love is blind

Hamlin’s season ended with a pole and a 12th place finish at Homestead-Miami Speedway.  What also ended was his pairing with Wheeler as crew chief.  Next year, Chris Gabehart will take over the No. 11 pit box after working with JGR’s XFINITY Series program for the last three years.

5 wins, 37 top 5s, 61 top 10s. Thank you @MikeCWheeler for the last couple of years. You were there for me in the beginning when I first started with JGR 14 years ago. It’s been a great ride. pic.twitter.com/FLQOIiDbiu

The lack of wins makes Hamlin’s 2018 season look a lot worse than it actually was.  His average finish this year was 12.6, slightly better than the 12.9 he earned during his eight-win season in 2010.  But there is no doubt that something was missing from the No. 11 team, especially given Kyle Busch’s success.  Perhaps Gabehart will provide the spark that gets Hamlin back to his winning ways.