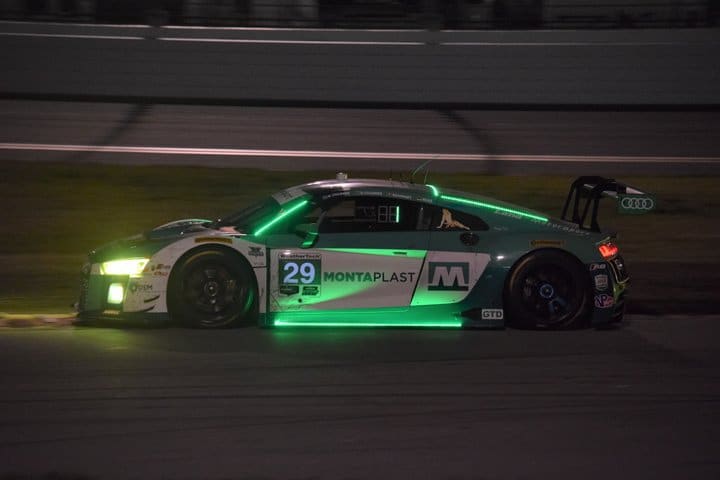 MONTAPLAST by Land-Motorsport announced a revamped driver lineup for their No. 29 Audi R8 LMS GT3 for January’s Rolex 24 at Daytona on Friday (Dec. 14).  Christopher Mies is the only driver from the team’s lineup in January to return to the No. 29.  He’ll be joined by Daniel Morad, who debuted with the team at Road Atlanta in October.  Finally, Dries Vanthoor (younger brother of Laurens Vanthoor) and Ricardo Feller will complete the driver lineup.

The German team believes that they have a very good chance of success in the season-opening assault.

“We are confident going in to our first race of 2019,” stated Team Principal Christian Land.  “Given our extensive preparations for this race and the strong driver line-up, we want to be fighting for victory in Florida.  We have successfully shown our potential around the Daytona International Speedway on several occasions in the past.”

2019 will be the team’s third consecutive year competing in the Rolex 24 at Daytona.  In 2017, the team finished second in GT Daytona.  Earlier this year, they dominated the first half of the race, lapping the entire GT Daytona class.  Then, they were handed a stop and five-minute hold for violating “Attachment No. 2” of the IMSA Sporting Regulations.  This is the so-called “anti-sandbagging rule.”  The car itself was fully legal and so was the team’s fueling rig.  However, they were filling their tank too quickly during their pit stops.  The penalty effectively docked the team three laps.  Additional issues and penalties relegated the team to a seventh-place finish in class, three laps behind the winners.

The team may have had their hand forced in regards to their lineup by IMSA.  Last season, the team had 19-year old Sheldon van der Linde as part of their team.  He is a Silver-rated driver as per the FIA for the 2019 season.  However, IMSA has the ability to adjust driver ratings as they see fit.  Back on Nov. 29, IMSA adjusted van der Linde’s rating up from Silver to Gold.  That change limits van der Linde’s ability to drive in Pro-Am classes.  The team’s Rolex 24 lineup has two pros (Mies and Vanthoor) and two amateur racers (Feller and Morad).