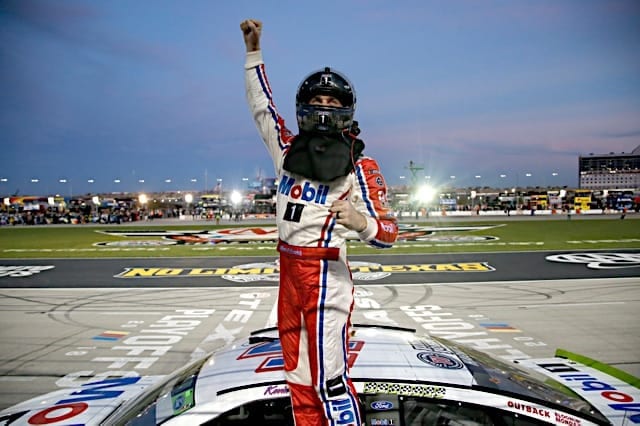 It’s one thing to be named to a so-called elite (here known as big) class of NASCAR’s top racing series early on in a given season. It’s another thing entirely to prove it was the right decision for the rest of the year.

That’s what Kevin Harvick, easily among the class of the 2018 Monster Energy NASCAR Cup Series field, accomplished this year. The race winner in three of the first four events of the season, the driver of the No. 4 established himself — and Stewart-Haas Racing — as a favorite for the title right off the bat, and success kept coming. There was a point, in fact, where he was on pace to top 10 wins by the end of 2018 — a tall order, considering that in a Cup career dating back to 2001, he’d never won more than five races in a single season.

He didn’t quite get there, but don’t for a second think that Harvick didn’t meet the lofty expectations that came from his early-season success. By season’s end, he had a career-high eight wins, a number exceeded only by his nine-victory 2006 championship season in the Xfinity Series. He also nabbed 29 top 10s — another career high — and tied his 2015 mark of 23 top fives.

A third-place finish in points might not have been the exclamation point on the season Harvick and co. might have wanted, but such is the nature of the playoffs, particularly the Championship 4 round. Many years, Harvick’s result of third at the season-ending event at Homestead-Miami Speedway would have capped off a championship year. Instead, it slotted him behind Joey Logano and Martin Truex Jr. simply because they happened to finish ahead of him in the race and were already in contention for the title. Look, he led 58 laps, too. It’s not like he had checked out.

Still, third is third, but eight wins are eight wins. To boot, the overall consistency of Harvick’s season, while not one for the record books, must remain a point of pride for the veteran. His 29 top 10s in 36 races are the most in a single season since 2007, when Jeff Gordon scored 30. Even when he wasn’t winning — and with a  22 percent winning percentage, well, he was triumphant more than most, save for Kyle Busch, who equaled his eight victories — he was there, sometimes ready to strike should others experience misfortune, other times simply racking up all-important points for later use in the playoffs, particularly its later rounds.

To that end, consider the season a mission accomplished. Harvick was, of course, already part of the playoff picture after week two, but seven regular-season wins kept him part of the conversation — the aforementioned Big Three, as it were. Harvick, Busch and Truex — particularly the former two — never allowed themselves to not be on title predictors’ radars; they didn’t slide into that role the sport occasionally sees of the early favorite who, once assured a postseason spot, coasts a bit, trying new things here and there or simply losing the shine they once had. The No. 4 team continued winning, kept earning points for the playoffs.

And once he was there, things remained business as usual. During the playoffs, Harvick was never really in danger of being eliminated in the two rounds in which he didn’t win, the rounds of 16 and 8, accumulating enough points to keep his name in the running. Then came the Texas Motor Speedway victory in early November that punched his ticket to Homestead — and even then, had he not won, finishes of 10th and fifth in the other two events of the round meant he was going to have a shot to make it in on points alone.

Simply put, he was money all year — beginning, middle and end.

Really, the only downsides remain two things, and neither are all that bad. Finishing third for a second year in a row can’t be the dream, though it’s better than 2016’s standings result of eighth, and a similar finish in 2019 could lead to some head scratching; if the Closer can’t seal the deal at the close of the season, what’s wrong? And then there’s, simply put,his inability to reach 10 wins this year. Again, eight’s great, and it’s three better than he’d ever accomplished. At the same time, though, missing double digits by a mere two victories has to bring about a twinge of disappointment — again, a twinge, nothing crazy. Like, hey, you asked for six things for Christmas and got five of them, and the one you didn’t wasn’t even the thing you wanted most, so it’s all right.

…then again, in this scenario, a championship probably would have been on the Christmas list, so let’s arbitrarily say he went five-for-seven.

OK, whatever, weird analogy. The point is that Harvick has unfinished business. Despite a 45-win career, his 2014 championship is his only triumph in that category, and the veteran turned 43 a week ago, an age around which some of his contemporaries have been retiring as of late. It’s tough to imagine a NASCAR without Harvick, and with the broadcast booth probably a part of his future, it’s not like that will even happen at all (see: Gordon, Earnhardt). But a move to a part-time career or all-out retirement may not be too far away, and if that’s the case, the door on a second title is starting to close. Same goes for a career with at least 50 Cup wins.

Here’s the thing, though: Harvick’s already the class of SHR, an organization that’s unlikely to lose its luster in 2019, regardless of who ends up in the No. 41 along Harvick, Clint Bowyer and Aric Almirola. Unlike someone like, say, Jimmie Johnson, it’s clear he hasn’t lost a step ability-wise yet; in fact, 2018 could be argued as his prime, given his new personal bests in multiple statistical categories. Losing out at Homestead two years in a row may make him all the more hungry to finally repeat come 2019, and he’ll be doing it with a team that should still have everything it needs to contend still in place.

So, 2018? A damn good year; he would have been a worthy champion had Homestead went a little differently. And there’s no reason to believe that in 12 months we won’t be having a similar conversation, albeit with potentially better results.

I cannot get jazzed about the “stellar” year, the “great” year…or whatever superlatives you wanna put on his season. Tis’ tainted imo. THE SPOILER DRAMA says it all! Damn shame, and it is big! IMO!