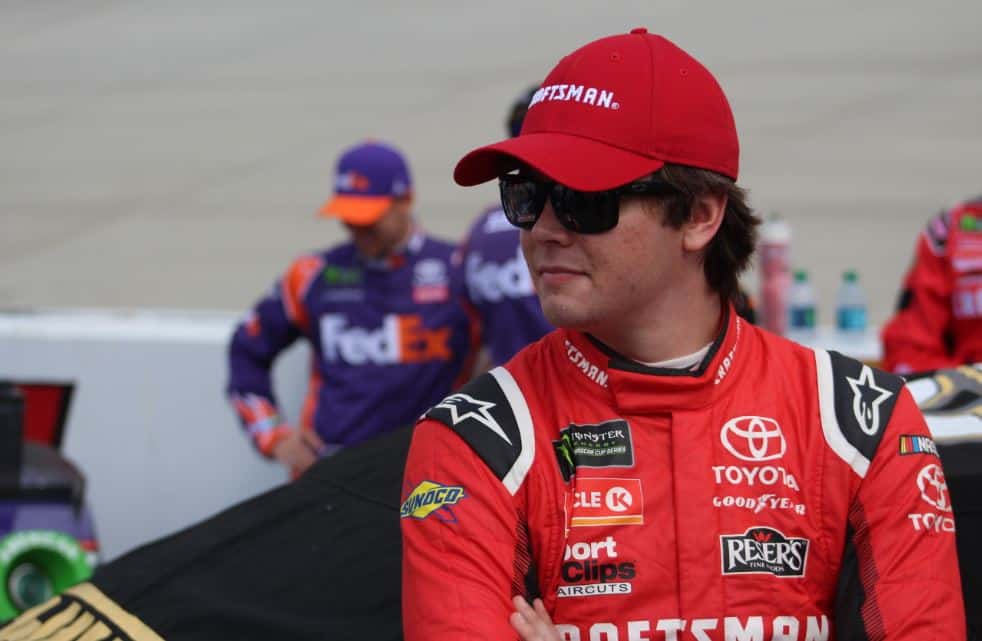 2018 was a solid step forward for Erik Jones.

Avoiding the dreaded “sophomore slump,” Jones built on the foundation he made in his rookie season by improving in just about every category in 2018.

The first half of the season didn’t really show that, however. In the first 15 races, Jones had just one top-five finish and five top 10s. While that top five, a fourth at Texas Motor Speedway, was a strong race for Jones — he led 64 laps, the most of any other race all year for him — he just didn’t have the consistency to turn that into any more than an outlier.

But as the weather got hot, so did Jones. In the following 11 races, Jones snatched nine top 10s. During that period, Jones was able to perform at some of the toughest tracks on the calendar, including top 10s at both road courses, a fifth at Pocono Raceway, another fifth at Bristol Motor Speedway and an eighth at Darlington Raceway.

The season highlight for Jones came in early July at Daytona International Speedway. In the race’s second overtime attempt, Jones took advantage of a duel between Kasey Kahne and Martin Truex Jr. on the backstretch to get side by side with Truex heading to the white flag. Coming out of Turn 2, Jones got a huge push from the JTG Daugherty Racing train of Chris Buescher and A.J. Allmendinger to clear Truex, then blocked a surging Truex into Turn 3 to secure his first Monster Energy NASCAR Cup Series win.

As virtue of both his Daytona win and strong performance in the back half of the regular season, Jones was named to his very first NASCAR Cup playoffs. Jones entered with a lot of momentum, finishing second in the regular season finale at Indianapolis Motor Speedway for his best non-restrictor plate finish of the season.

Tied for the 10th seed, Jones started off on the wrong foot at Las Vegas Motor Speedway. He started the race on the pole and was running in the top five when, mid-way through the race, Kevin Harvick blew a tire right in front of him. Jones plowed into the 2014 series champion and couldn’t continue in the race. Going from the pole to last when the checkered flag falls is a pretty notorious accomplishment, and Jones did just that under that hot Las Vegas sun.

Jones needed to bounce back at Richmond Raceway, being down 19 points from the last transfer spot. His wish came true, finishing a solid 11th. Sadly, it was a monkey’s paw, as the 10 drivers who finished ahead of him were all playoff drivers. Instead of gaining points, Jones actually lost two points on the transfer spot heading into the final race of the round.

At the Charlotte Motor Speedway ROVAL, Jones was able to recover from a devastating practice crash to be as high as third at one point in the race. But he fell victim to a flat tire and lost two laps en route to finishing 30th and being knocked out of playoff contention. The young star from Michigan was able to rebound with three straight top 10 finishes after this, but his poor first-round performance stopped him from being able to finish beyond 15th in points overall.

We’ve had a great season and we’ve still got some things to do. Thanks for all the support! pic.twitter.com/65JzOOCGRL

Jones also finished races much better than in his rookie season. In 2017, he finished below his average running position in 20 out of the 36 races. In 2018, that number dropped to just 10 in 36. Part of that is he had five fewer DNFs this year, but that’s still a big improvement from the previous season.

Looking ahead in 2019, it should be “go time” for this team. Things typically start to happen for drivers in their third year racing at the Cup level. And although that may be a foreign concept for Jones — this is the first time he hasn’t been able to compete for championships right out of the gate in a series — there’s a lot of signs that things will continue to improve for the young driver in the future.

One noticeable thing about Jones has been just how much better he has gotten with experience compared to some of his contemporaries in the series. While now-former teammate Daniel Suraez seemed to get worse once he started visiting these racetracks a second, third and fourth time, Jones has gotten better.

With crew chief Chris Gayle returning to the team, there’s no real reason for Jones to fall unless something beyond the team’s control were to happen. One area that Jones needs to work on is his playoff performance. As outlined above, Jones was never a factor and had just four top-10 finishes in the final 10 races of the season. Even though he didn’t run like a driver who won a lucky restrictor plate race throughout the regular season, he did just that in the playoffs. He just couldn’t get into a rhythm like he will need to if he wants to eventually race for a championship.

Not the race we wanted to end the season, but man what a year. I’m proud of all we accomplished including our 1st win. Thank you to everyone on the @DEWALTtough team and all the fans who cheered us on. Enjoy the off season, happy holidays and we’ll see you in Daytona #TeamToyota pic.twitter.com/A0UpBAkojp

Perhaps the main reason for Jones’ playoff struggles is because Joe Gibbs Racing was putting all of its eggs into the No. 18’s basket to try and get Kyle Busch another championship. But Denny Hamlin enjoyed some of his strongest finishes of the season in that same time span.

Drivers can afford to have a slow start to the season, as evidenced by some of the championship runs seen through the years with this format, but the No. 20 team is going to need to step it up when everything matters going forward. Like Jones himself, this team has a lot of raw speed, and once they figure out how to use it effectively, the rest of the field better watch out.