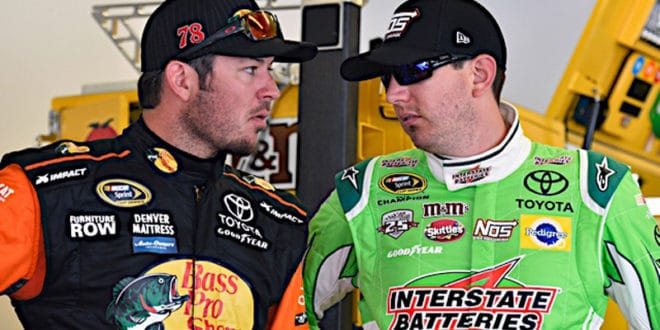 2018 NASCAR Top Storylines: How Did Each of the Big 3 Fall Apart?

The Big Three. This was the most popular phrase throughout the 2018 Monster Energy NASCAR Cup Series season. Between Kevin Harvick, Kyle Busch, and Martin Truex Jr., all three dominated the first 3/4 of the season and it looked as if nobody else would be able to overtake them and be champion at the end of the year. That changed when Joey Logano got hot at the right time and won the championship after a stellar drive at Homestead in the final race of the season.

Logano was the one driver who was able to reign over “The Big Three” when all was said and done. There were several other drivers who had moments where they could have been a part of the discussion that Logano became a part of during Homestead weekend. Drivers like Chase Elliott, Brad Keselowski, and Clint Bowyer all had their moments during the year where they were viewed as that fourth driver and the one to have a chance to defeat “The Big Three.”

Where did the three top drivers all season long go wrong? What did they lack when it came down to competing for the ultimate prize at the end of the season?

Let’s start with Harvick. Harvick had 8 wins during the season, many of which came in dominant fashion. He started the playoffs as the favorite to win the championship, but it became evident in the first race that it may not be easy to win the title. A blown tire at Las Vegas cut Harvick’s bid at another win short but still was easily safe for the next round. Throughout the next 6 races, Harvick would have 4 top 10 finishes and was solidly into the Round of 8. After his win in Texas and clinching his spot into the Championship 4, the car was found to have a major infraction and crew chief Rodney Childers was suspended for the final 2 races of the year.

Whether this was the reason Harvick did not win the title or not, that is unknown but it had a big effect on the team with him not on the box during the last two pivotal races of the playoffs. The speed was still there but something seemed to be lacking on the No. 4 machine when it came down to it, and he ultimately wound up finishing 3rd in the championship.

Kyle Busch wound up with 8 total wins on the year, tying Harvick for the season high in the series. Busch had an extremely consistent and strong regular season which led to a regular season championship. Along with Harvick, he was viewed as a favorite to many as well.

Busch started off the first round of the playoffs with a win in the second race in the round at Richmond and it looked like he was taking over as the ultimate favorite. He never had that extra step that everybody thought he would have once he won, but he was as strong as anyone after winning at ISM Raceway. Busch rolled into Homestead a part of the Championship 4 and many picked him to win it all. Unfortunately for Busch, he did not have the speed all weekend long and wound up 4th in the championship standings. The downfall of Busch? There really is not any downfall. It came down to one race and he did not have the car to beat the other 3. He had a stellar year, but he could not finish it off in the final race when it mattered most.

The last member of “The Big Three” was Truex Jr., and after 4 wins in the regular season, Truex and his No. 78 Furniture Row Racing team were poised to repeat as champions. Unfortunately, uncertainty and controversy were the two main words to describe Truex’s playoff run.

The week before the playoffs would begin, Barney Visser announced that FRR would be shutting down at year’s end. Truex  and his team were left with uncertain futures, but at the same time, they had a full 10 races to go and try to win another title. After two 3rd place finishes to start off the playoffs, Truex would struggle the next several weeks and be in danger on not even making the Round of 8. He did what he had to do though and made it. Then came Martinsville.

After having arguably his strongest race of the playoffs, Truex was on his way to a win at Martinsville when in the final corner, Joey Logano would move him out of the way to win the race. There was obvious frustration from the driver of the No. 78 and he let it be known after he said Logano “Won the battle but he would not win the war.” Truex wound up in the Championship 4 and after a stellar race, he would come up just short of his second consecutive title and finished 2nd in the championship standings.

Many will say the announcement of the No. 78 team shutting down was the reason for the struggle in the middle part of the playoffs. The timing of the announcement was definitely not very good for the team, as it may have created a distraction, but in the end, Truex Jr. came up just short of winning it all again.

There have been seasons before where we saw three drivers have the amount of wins Harvick, Busch, and Truex Jr. had this season, but many of us may not remember three drivers being this dominant. If we go back to 2008, Jimmie Johnson, Carl Edwards, and Kyle Busch combined to win 24 of the 36 races. This season, “The Big Three” combined to win only 20.

The downfall of each is unique, but when it came down to the end when they needed the strongest performance they have had, none could come through. All had amazing seasons, and we should not expect any different from the drivers in 2019, including Truex Jr. who will be with Joe Gibbs Racing in the No. 19. Whether we see another “Big Three” anytime soon, it could happen, but if we learned anything in 2018, it was the fact that anything can happen, no matter who dominates all season long. 2019 should be more of the same, and it will be one wild ride.

Brandon is a 22-year-old from NY and has been a passionate follower of motorsports for 14 years now. He recently graduated from Molloy College on Long Island with a BA in Communications. Working within NASCAR has been a dream for Brandon for a while, and he hopes to be able to live out the dream in the very near future.
Previous 2018 NASCAR Driver Reviews: Joey Logano
Next Matt McMurry, Gabriel Aubry Join PR1 Mathiasen Motorsports for 2019