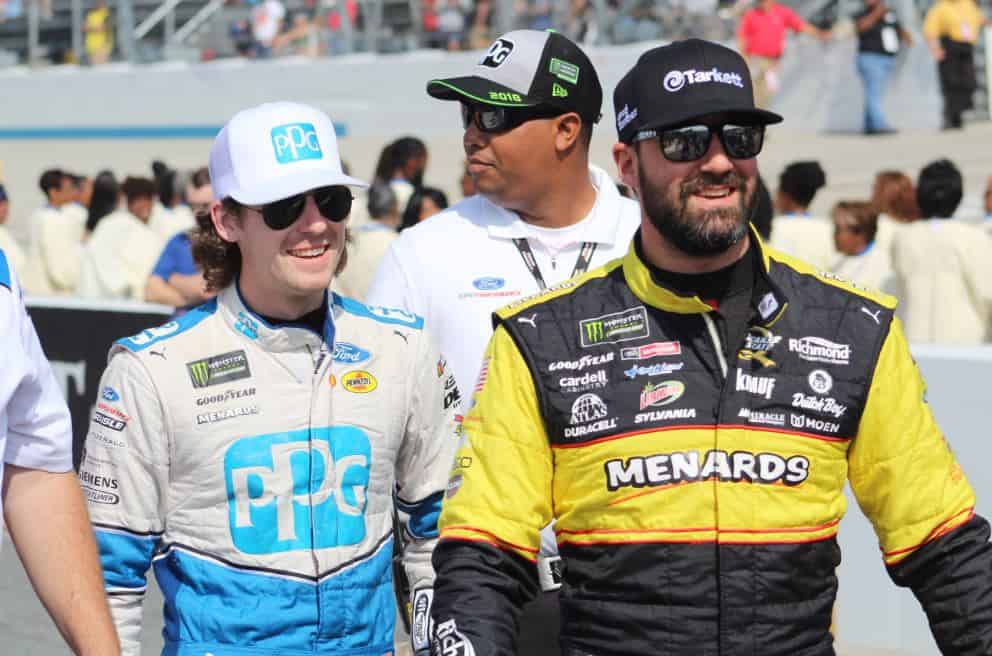 For the new season, there was one story seen across multiple teams in the Monster Energy NASCAR Cup Series: Veteran drivers in new rides. Specifically, underperforming veterans joining competitive teams, arguably of a higher caliber than their previous respectful homes.

Though Aric Almirola would be considered the top of this category, leaving Richard Petty Motorsports for Stewart-Haas Racing, Menard was another man in this group. This warm-hearted cool customer left Richard Childress Racing following 2017 to join Wood Brothers Racing and their iconic No. 21 Ford following the departure of Ryan Blaney.

With seven years of lackluster performance in RCR’s No. 27, a new chapter was written in 2018. Menard and Wood Brothers Racing. Together for the full season.

Would it go well? Would he blossom in better equipment? Or perhaps, can Mr. Private Life bust outside his shell in one of the most Twitter-savvy race teams in the sport?

A lot of questions were thrown in the hat during the preseason media availability. And Menard, who was to turn 38 in August, was honest about his situation, riding a winless drought of six straight seasons into 2018.

“I’m not getting any younger,” Menard said in January. “I’d obviously like to win more races, and this is a great opportunity to do that. It’s been a few years since I’ve won one and I’m definitely ready to get back at it.”

Among the goals for 2018 was grabbing Wood Brothers’ 100th win in the Cup Series. The team has scored only one win since 2011.

“I want to go out and compete for that 100th win,” he continued. “I’ve never been with a one-car team. We will share some information with Team Penske, but when I go to the race shop, it will be a one-car team.”

With the team set, goals in line and expectations open-minded, Menard entered the Daytona 500 in his bright-yellow No. 21 for the first time. Making his 400th Cup Series start in February’s epic 500-miler, he survived the day and night for a sixth-place finish, his fourth top-10 finish in his 11th Daytona 500.

With a ninth-place run two weeks later at Las Vegas, the year was off to a decent start for the Team Penske alliance. In 2017, Ryan Blaney, too, started the year with two top 10s in the opening three races.

For Menard, however, the year nose-dived soon thereafter, running eight straight races with only one lead-lap finish and no top 10s. This string of races dragged Menard 12 spots back in points to 21st as the calendar turned near summertime.

Meanwhile, one new appearance in Wood Brothers history was made at Richmond in April, when Menard brought new sponsor Quaker State for the first of two races in 2018. Bringing the sponsor back to the sport in 2006 following an 11-year hiatus, Menard made this partnership a first with a Wood Brothers car, continuing one of his most beneficial qualities for the Ford team in 2018.

Game face on. See Paul Menard and his Quaker State paint out this weekend at the #QS400. @kyspeedway @woodbrothers21 pic.twitter.com/CwijBSBzvh

Performance-wise, Menard finished sixth at Kansas in May, finally being met with a solid night. This momentum showed in the following weeks with back-to-back top 15s at Charlotte and Pocono before a season-high fifth-place run at Michigan gave Menard his first non-plate top five in more than three years.

Coincidence or not, it was during this time that Menard made his first Xfinity Series starts of the season, driving Team Penske’s scary-fast No. 22 in the secondary series. Finishing in the top 10 in all four starts, he also finished fifth the same Michigan weekend as his Cup Series top five.

Two weeks later, Menard arguably shocked the garage when he broke 180 mph while qualifying at Chicagoland Speedway, earning him pole position for the Overton’s 400. The red-hot lap gave Menard his first pole in nearly 10 years and only the fourth for the Wood Brothers since 1984.

Dale Earnhardt Jr. perhaps summed up the popularity of seeing the No. 21 and Menard on top, exclaiming, “Come on, Paul!” as the Ford approached the line.

Though failing to lead the opening lap and eventually falling to 13th, it was Menard’s highlight of 2018. Unfortunately, however, it did not lead to further success in the months that followed, as another string of struggle followed the No. 21.

Chicago was the second race of an 11-race run without a top 10, finishing a highest of 11th at Kentucky and worse than 20th five times. Among the rough weekends was Daytona in July when he went for a ride down the backstretch on lap 50.

Returning to the top 10 at Indianapolis in September, Menard backed it up with a 10th at Las Vegas, earning his first consecutive top-10 finishes all year. This was perhaps where the struggle was found with Menard in the No. 21: Consistency.

If there was a synopsis for Menard in 2018, it would’ve been this five-race span from Las Vegas to Talladega. Just look at the results: 10th, 22nd, 33rd, 16th, ninth. Occasional top 10s, littered with lackluster top 25s and a crash thrown in there.

Proud and honored to have David riding with us one last time. #nascar pic.twitter.com/bCXOqxDSBJ

In fact, with 11 finishes worse than 25th, that would tie his most in this category since 2009, despite earning his best average finish since 2015. Additionally, Menard earned seven top 10s for the year, more than his last two years with RCR combined.

So, career-wise, 2018 was actually a good year. Compared to his final two seasons with RCR, it was a step up in terms of top 10s, poles, average start, average finish and championship points finish. But compared to Ryan Blaney’s 2017 numbers, it’s a different perspective.

In their three years since returning to full-time competition, 2018 may be considered their worst. But one could say that a foundation has not been built for a better 2019, and though it is a one-car team, their alliance with Team Penske will continue to be of assistance.

Need proof? Well, one of our preseason wonders was answered during the Team Penske Games on YouTube, when his supportive teammates got Menard to sing a Taylor Swift hit song. Who else could possibly pull that off?