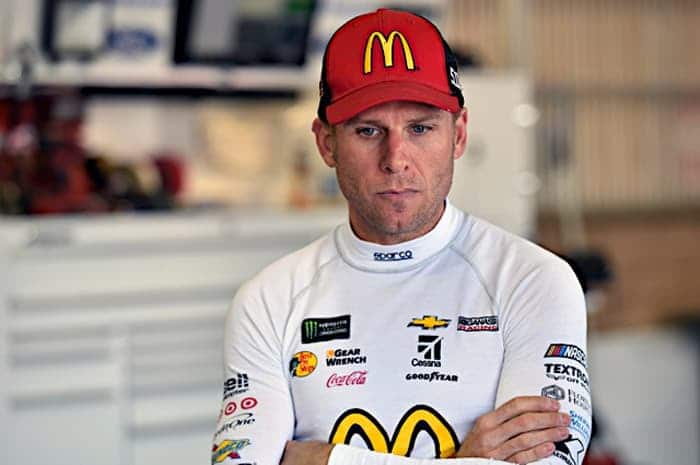 Jamie McMurray seemed to hit a sweet spot in his career as the 2018 Monster Energy NASCAR Cup Series season approached. For years, he was known as the good, not great Cup driver who would always fall just short of a playoff appearance. But an 11-year postseason drought had been cleaned up under the sport’s current format. Three straight playoff bids peaked with McMurray advancing to the second round for the first time in 2017. A fifth at Charlotte put him in position to go even further before wrecks at Talladega and Kansas sent him off the rails.

2018 was supposed to be about McMurray resuming his role as a quiet, consistent underdog. Instead? It paved the way for his retirement.

Look no further than the sport’s restrictor plate races to see just how far McMurray tumbled last season. Daytona and Talladega Superspeedway have produced four of his seven career wins, including the 2010 Daytona 500. But he failed to lead a lap or finish inside the top 15 last year in four starts. Instead, his year was punctuated by a rollover wreck on Talladega’s back straightaway after struggling to stay in contention.

A wild ride, but thankful for all that our team and NASCAR does to make these cars as safe as possible. https://t.co/rNPG41hEZj

McMurray didn’t even collect a single stage point, crucial for a driver whose last win was the fall Talladega race way back in 2013. It’s the only Cup event McMurray has won in his last eight seasons running with Chip Ganassi Racing. Two years ago, he made the postseason without leading a single lap in any race. So you can see how simply contending in the plate events put him in position to be an unlikely playoff contender.

2018 would not give him that opportunity. A 16th in the Daytona 500 was followed by a 19th at Atlanta and then a crash at Las Vegas that left him 36th, earning a single point on the day. By the time he finished the first six races, all without top-15 finishes McMurray was a dismal 26th in the standings. Already, he had slid almost a full race (51 points) outside of playoff contention.

A third at Texas Motor Speedway in April did little to mitigate the damage; McMurray accumulated just four bonus points through two stages. The next week, he disappeared, slipping to 19th at Bristol and was never able to harness momentum. The next time he popped up inside the top five was a surprising second at Charlotte’s Roval in the fall.

Even that run had a dose of Lady Luck attached. McMurray had a solid car, no doubt, running in or near the top 10 all day after starting eighth. But he benefitted from a wild ending, a late wreck that eliminated several top contenders and then a crash between leaders Martin Truex Jr. and Jimmie Johnson in the final two turns. A likely top-10 effort was elevated to second, just .732 seconds behind Ryan Blaney in what could have been the first (and only) road course win of his career.

By then, we knew McMurray was on the way out, replaced by 2004 Cup Series champ Kurt Busch for 2019. So perhaps it’s fitting the best run of his final full-time season came where that NASCAR career was sparked. It was at Charlotte, back in the fall of 2002 where McMurray emerged triumphant, victorious in just his second Cup Series start. A temporary stint replacing Sterling Marlin, out with a neck injury turned into a win with a No. 40 team that was a title contender before Marlin got hurt.

Back then, McMurray emerged a young star in an era of NASCAR’s unprecedented growth. National stories swirled about him and then-girlfriend Cielo Garcia, spotlighting their love story. Chip Ganassi opened the door for a full-time ride with sponsor Texaco Havoline, poached for big money from rival Robert Yates Racing. He waltzed to Cup Series Rookie of the Year in 2003 and appeared on the verge of superstardom.

But, like his fellow group of retirees after 2018 (Elliott Sadler, Kasey Kahne, AJ Allmendinger) McMurray’s career was marked by unfulfilled potential. Three years at Ganassi produced close-but-no-cigar moments as NASCAR introduced the Chase. He was the first man out in 2004 and wrecked while trying to make it the following year.

Jack Roush then bit, betting the house on McMurray as Mark Martin prepared to retire. But four years with that multi-car operation produced arguably the biggest disappointment of Roush’s Cup roster. There were just two wins, both at plate tracks, before McMurray was unceremoniously dumped in 2009. Former employer Ganassi, himself on hard times, picked him up but little was expected from the duo.

McMurray did respond back in 2010 with the one memorable year of his Cup career. It’s not often you’ll ever hear a driver say they won the Daytona 500, Brickyard 400, and an oval race at Charlotte in the same year. It’s the type of one-off performance, combined with the driver’s popularity and past potential that bought him time with Ganassi.

But as 2018 came to a close, it was clear the buzzer had sounded on that time clock years ago. In the last four years with CGR, McMurray produced 11 top-five finishes and 44 total laps led. In 2018 alone, teammate Kyle Larson produced 12 top-five finishes and 782 laps led in what was a down year for the Chevrolet Camaro. At 42 years old, it was clear McMurray’s talent could be used elsewhere; it was also clear that 16 years in top-tier equipment would not give him another chance to prove himself.

“I had opportunities to drive, they just weren’t opportunities I wanted,” he said in November. “I was fighting for one of the (open) rides. There was a point that honestly I looked at it, and I was like, ‘I don’t know that I want them to call me back.'”

So now we’ll see McMurray in a different role this season: TV analyst. As Busch announced his deal with Ganassi, the owner chirping he’d like to keep McMurray in an advisory role FOX reached out and signed the retiring driver instead.

Excited to join the @NASCARONFOX team in 2019, and looking forward to this next chapter of my career. Thanks to all who made it possible! https://t.co/WiGDIbgIQz

It’s unknown whether McMurray will run one last race, the 2019 Daytona 500 for CGR before calling it quits. But it’s clear he’s about to start a whole new chapter of his racing career at a time when FOX analyst Darrell Waltrip is going to be 71. Could McMurray be one of a handful of drivers FOX is considering to put in its booth long-term?

We’ll see. But 2018 showed us how quickly a driver like McMurray could change his “sweet spot” from a top-10 run on the racetrack straight into a suit and tie. Performance in NASCAR still matters… sometimes.