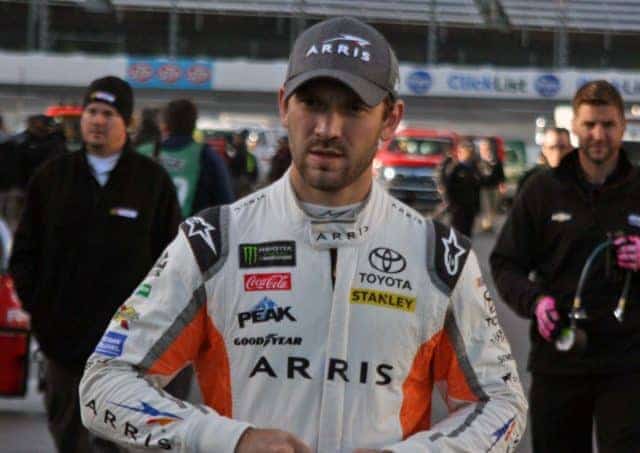 For young NASCAR racers, one label you desperately want to avoid is the “Sophomore Slump.”  A decline in performance after a decent rookie year is never good for a youngster, especially today.  Any slip-up can spell curtains to a career.

2018 seemed to be every bit of that for Daniel Suárez on the surface.  He seemed to be nowhere near as successful as he was in his rookie year, especially early on.  At one point in 2017, Suárez was knocking on the door of being one of the top 10 drivers in the Monster Energy NASCAR Cup Series.  But you never got that idea this past season judging from Suárez’s performances.

Despite that, his stats at the end of 2018 were not all that much worse than his rookie year.  He actually increased his top five total from one to three and improved his best finish to second, all while dropping his DNFs from six to three.

The difference?  Suárez was just that little bit worse in 2018 when it mattered as compared to his rookie year. A whole season’s worth of performances were off at the wrong times.  Barely enough to be noticeable, but small mistakes added up. The end result became a second postseason miss and a search for a new ride to continue NASCAR competition in 2019.

He didn’t help his case much with a very slow start. In February’s Daytona 500, he ran very well early and was in position to earn some crucial stage points.  Then, Ricky Stenhouse Jr. nearly spun after contact from Ryan Blaney and stacked up the field.  The result was this big wreck.

Suárez just couldn’t avoid Kyle Larson and got turned head-on into the Turn 3 wall.  The Visor/Helmet cam replay from Suárez’s point of view is quite scary.  Needless to say, he was out for the day and walked away with minimal points in 37th.

Daytona’s crash was a stumble that took awhile to recover from. Next came an average run at Atlanta and a disappointing 26th-place finish at Las Vegas.  A top 10 at ISM Raceway helped, but Suárez was already looking at a gap to all of his Joe Gibbs Racing teammates by that time.

Suárez came into his own in April with a couple of top-10 finishes that moved him up into the top 20 in points.  A career-best (at the time) third-place finish at Dover in May really helped his cause significantly. He closed to within 25 points of the postseason cutoff line.

But an ugly four-race stretch followed with three runs outside the top 20. Suddenly, the gap grew to well over 50 points as other playoff contenders like Alex Bowman hit their stride. The gap proved to be too much for Suárez to overcome without a victory.

That’s a shame because after crashing out at Daytona, Suárez embarked on his best stretch of the season.  Middling runs at Kentucky and Loudon were followed up by a second-place finish at Pocono, a career best.  He didn’t stumble onto the finish, either.  He qualified well and had a car that was at least 99 percent as good as race winner Kyle Busch had.

The next weekend, Suárez went to Watkins Glen and walked out of there with a fourth-place run.  Sure, he didn’t claim a stage win like he did in his rookie year, but he backed up his top-five effort from 2017.

But that was too little, too late in a postseason bid that never gained traction. Often times in motorsports, you’re only as good as your last race or races.  Suárez did not finish the 2018 season well after missing the playoffs.  After Dover in October, crew chief Scott Graves left the team and was replaced by Dave Rogers.  With Rogers on the box, Suárez finished ninth at Martinsville, but struggled at times.

At Texas, he cut his right front tire and hit the wall in Turn 2.  After repairs, he finished five laps down in 28th.  He ran in the back of Joey Logano at ISM Raceway and put himself out of the race.  Finally, he finished 30th in Homestead after a late spin.  Those runs dropped him from 18th to 21st in points.

Even with a rather disappointing end to the season, Suárez was still consistently better in the second half.  His average finish was one and two-thirds of a position better after the Coke Zero Sugar 400.

If you saw NBCSN’s Racing Roots: Daniel Suárez in 2017, then you probably know about how Daniel and his father have a long history with Volkswagens back in Mexico.  The Beetle was every bit of the car of the masses in Mexico that it was in the United States in the 1960s, and for much longer (original Beetles were manufactured in Mexico all the way to 2003).

In 2018, Suárez continued to feed his passion for classic cars away from the track. He spent some of his free time restoring a 1959 Volkswagen Beetle.  Before the work was done, he decided to have some fun in the snow with it.

Later in the year, he snagged this European Volkswagen from the 1950s.  Adjusting to right-hand drive might be an adventure for him.

In addition, Suárez remained very close to his family.  Even if involves scaring his own mother, it’s still obvious that he cares deeply for them.

For 2019, Suárez will not return to the No. 19 Toyota for Joe Gibbs Racing.  The team announced in November that Martin Truex Jr. will replace him in the car.  Cole Pearn has followed Truex to JGR and will continue to serve as his crew chief.

After the season ended, Autosport‘s Jim Utter wrote an article that argued that Suárez was unhappy at JGR during his time in Cup.  At the time, Suárez was racing go-karts in Brazil and only found out about it when he returned.  After reading the piece, he tweeted this reply.

Suárez has not announced his 2019 plans as of this writing.  Reports for months have linked him to the No. 41 at Stewart-Haas Racing that Kurt Busch just vacated.  Sponsor ARRIS may or may not follow Suárez in this scenario.  Look for an announcement of his 2019 plans sometime in January.