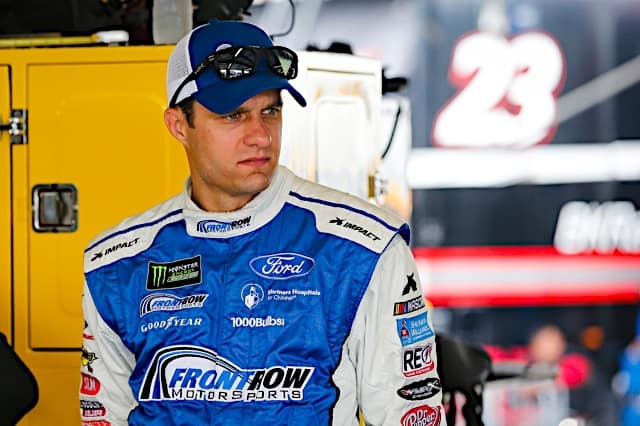 For David Ragan, 2018 was defined by overachievement.

In his fifth season driving for Front Row Motorsports, the mantra for Ragan’s year was all about making more with only limited resources. With FRM on a limited budget, the expectations were the same as 2017: just be consistent and bring the car home in one piece.

Yet, Ragan approached 2018 with a renewed sense of optimism. To begin the season, FRM welcomed journeyman driver Michael McDowell to the team to drive the No. 34 Ford alongside Ragan in the No. 38. With the addition of his new teammate, Ragan and FRM looked to improve with their continued alliance with Roush Fenway Racing and improved resources from Roush Yates Engines and Ford Performance.

An accomplished and acclaimed restrictor plate racer, Ragan looked for a strong performance in the season-opening Daytona 500. However, the Unadilla, Georgia driver has seemingly been cursed by the Great American Race. After nearly winning the race in 2011, Ragan has finished no better than 17th in the 500. However, the 2018 edition was no different. Ragan was swept up in an accident and was relegated to a 30th-place finish.

However, the following seven races were anything but a disappointment. Ragan did not record a finish outside of the top 25 during this stretch, including a remarkable 12th at Bristol Motor Speedway. Two races later, Ragan used his restrictor plate prowess to his advantage and wheeled his Ford to a sixth-place finish at Talladega Superspeedway.

Excited to leave @TalladegaSuperS with a solid run. Grateful 2 dodge the wrecks and have a fast car to contend at the end. @Team_FRM and @badboymowers team did a great job all weekend!

Extra shout out to all the @FordPerformance teams for fast cars!

Ragan continued to find remarkable momentum, earning a 13th-place finish at Kansas Speedway and a 16th at Pocono Raceway. However, following Pocono, Ragan recorded his second DNF of the season at Michigan International Speedway, though the 33-year-old did not score a DNF the rest of the season.

As the season pressed on into the deep summer, Ragan hoped to capitalize on his second trip to Daytona. Yet, he found it difficult to work his way to the front of the pack and compete amongst the top teams. However, he wheeled his No. 38 to a respectable 15th-place finish.

What a night. Got caught up in a wreck early and our #38 team did an outstanding job repairing the car and came home 15th. Great to have @shrinershosp along for the ride and everyone who supports our program!

While Ragan failed to make the playoffs, he was on pace to have his best season since 2011 at the end of the regular season. During the playoffs, Ragan and Front Row recorded top 20-finishes in five of the 10 playoff races, including four out of the five final races.

Looking back at the season, 2018 was impressive to say the least, despite average results on paper. Although he did not lead a lap in a season for the first time in his 12 year career, Ragan gave Front Row Motorsports several career highs.

He concluded the season 25th in points, clinching his best season since 2011. Compared to 2017, Ragan reduced his average starting position by five positions and his averaging finishing position by over two positions to 22.89, aided by minimal DNFs. With one top 10 and 14 top 20s, Ragan proved that he can still wheel a race car.

I’m proud of our @Team_FRM cars this season. Both @Mc_Driver and I had lots of fun and were able to improve many ways from last year. We have lots of work over the off season and looking forward to bigger and better things next year!

Ragan returns to Front Row Motorsports full-time in 2019 and will be joined by teammates Michael McDowell and rookie Matt Tifft, who will pilot the No. 36 as FRM expands back to a three-car operation.

Are you in love with David !