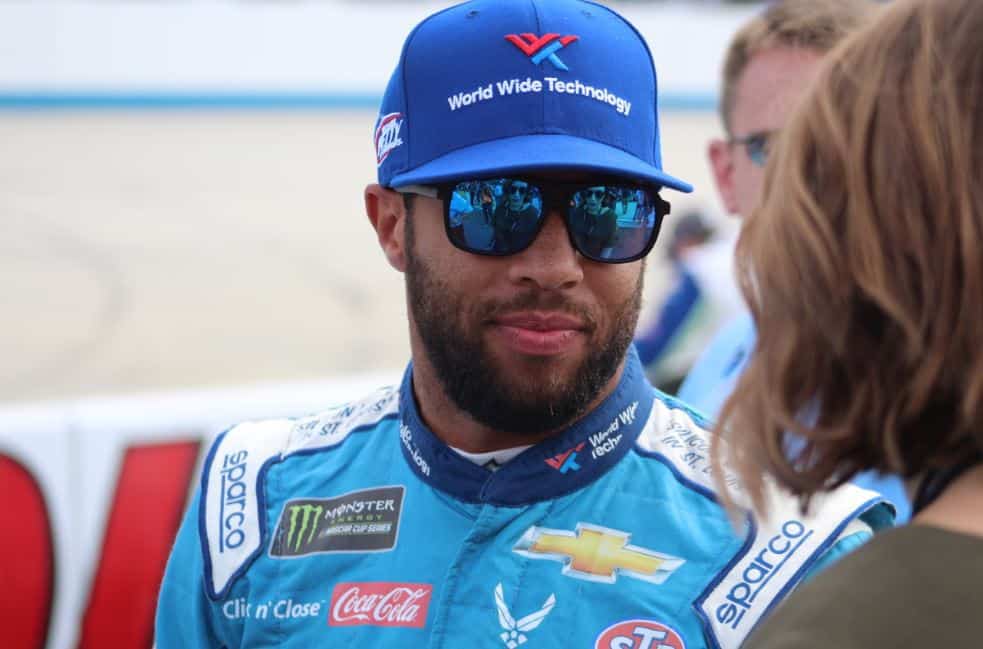 There were high hopes for Darrell Wallace Jr., heading into the 2018 season. Following a 2017 substitute role filling in for an injured Aric Almirola that saw consistently improved finishes, and the No. 43 getting up front again at Daytona in July, many were poised for a break out year.

Things got off to a stellar start at the Daytona 500, with Wallace finishing second, just edging out 2015 Daytona 500 champion Denny Hamlin at the line, and wrinkling the side of the King’s chariot – against his requests. The next weekend in Atlanta, he was top three in practice, but things soured from there as the inadequacies of the new Camaro platform, coupled with the realities of being a single-car team with limited resources, relegated him to mid-pack performance before an accident ruined what could have been a salvageable day. Unfortunately, this outing also set the tone for the season for the rookie Mobile, Alabama driver.

The team’s next top 10 would occur at Texas in April, where they qualified 15th and finished eighth, the second highest finishing Chevrolet team. It was an impressive showing for the No. 43 Camaro nonetheless, as other than Austin Dillion’s season-opening Daytona 500 win (by wrecking the Ford of Almirola out of the lead on the final lap), a Chevrolet Camaro would not win a race until August at Watkins Glen. In fact, Chevrolet wouldn’t win on an oval until Dover in September; both wins were by Chase Elliott. This run and marked downforce deficiency of the Camaro was highlighted in this top 10 at Texas Motor Speedway, that saw Martin Truex Jr., Kyle Larson, Jimmie Johnson, Hamlin, Brad Keselowski Almirola all eliminated from competition.

Perhaps the brightest spot for the team was a week later at Bristol in April, on a Monday rain date that saw the No. 43 battling for the lead in the later stages, passing Kyle Busch – the undisputed “king” of Thunder Valley over the past decade – leading for six laps. Wallace faded to a 16th-place finish, the victim of old tires and tire strategy going awry. Regardless, it did longtime No. 43 fans good to see the Petty Blue/Day-glo Orange colors up front contending for the lead at somewhere other than the restrictor plate Russian Roulette affairs four times a year.

The balance of the year from week to week was disappointing if not predictable; qualifying in the mid to high 20s, with similar finishes to boot. Limited sponsorship and the absence of a team car are a handicap for sure, but even more so when coupled with a car that wasn’t sorted out until the playoffs were about to start. Even when strategic partners Richard Childress Racing started showing some speed toward the end of the year, it didn’t seem to cascade over to the No. 43 at all. The team’s final top 10 was at Phoenix, a 10th-place effort that was lost among the late race mayhem and wrecking, vying for a final transfer spot to Homestead for the Championship. That, as well as a spectacular practice crash at the ROVAL in Charlotte, were the waning vignettes of a season that saw flashes of brilliance among a slew of mediocre runs.

Wallace ultimately ended the season 28th in points, finishing second to Hendrick Motorsports No. 24 driver William Byron in the Rookie of The Year standings.

The weak link in the equation is not Wallace as RPM has struggled with sponsorship, speed and resources for several years. The Camaro was struck with some late underbody aero changes before the season started, which got them behind the eight-ball.

The look to 2019 is a bit cloudy. The team appears to have retained long-time crew chief Drew Blickensderfer, but recently lost sponsor Click ‘N Close. The latter is bad for business obviously, having lost what limited funding it had from 2018. On the upside, one of the worst paint schemes on the track will have been banished to waste bin of history. The US Air Force, STP, and presumably team principal Andrew Murstein’s Medallion Financial will be back again for 2019. The team is also exercising their option on Wallace through the 2020 season. As is the tenuous nature of sponsorship in motorsports these days, funding could materialize suddenly – or not at all.

The fact that a driver with such potential, who understands how to use social media at such a critical juncture, as well as unmatched marketability has struggled to find a sponsor speaks volumes of the state of the sport. RPM needs to add a second team to even hope to keep pace with competition, as well as a strategic partner that isn’t riding the same struggle bus as they are.

3 years in xfinity without a win wasn’t Richard Pettys fault. Perhaps the truck series is the perfect fit.

At the beginning of the year, I wondered who would do better, Bubba Wallace, or Aric Almirola. it is obvious now, that the quality of the equipment means a lot more than the talent of the driver. Let’s hope the Camaro is a better race car in 2019.

RPM is the only team offering him a ride with him bringing no sponsorship money. RPM will be lucky to finish the new year.