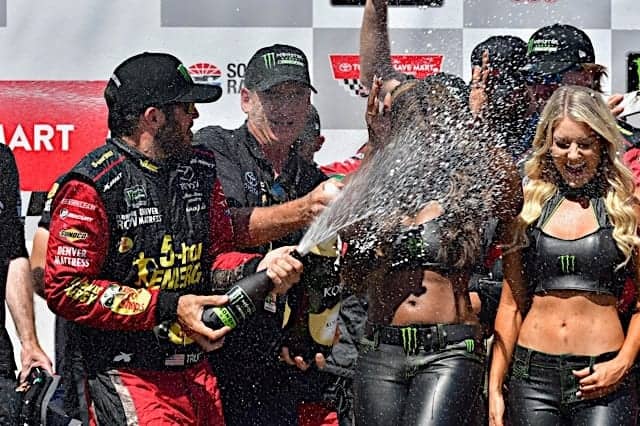 You would think that winning a Monster Energy NASCAR Cup Series championship would result in stability and security. Martin Truex Jr. and crew chief Cole Pearn should feel both confident in their accomplishments and hopeful in their futures. The championship team owner should feel both pride in his organization’s success and assurance in its financial condition. Everyone loves a winner, especially if they have a MENCS title to show for their hard work and dedication to the sport.

So what happened to Furniture Row Racing during 2018 was even more curious than anyone could anticipate. What happened to Barney Visser and company resulted from the harsh reality of modern motorsports: any race team’s future rode more squarely on spreadsheets than it did on speedways. All it took was for a single sponsor – NASCAR stalwart 5-Hour Energy – to pull its funding from Furniture Row Racing and set a suddenly uncertain title defense into motion.

Fortunately for NASCAR Nation, it seemed as though somebody forgot to tell Truex.

The 2018 MENCS season had the makings of a less-than-stellar defense for the 2017 champion as Truex started 24th and finished 18th at the Daytona 500. It was good, however, that a single race had little effect on the 36-event campaign. Truex and company put The Great American Race in the rear-view mirror and proceeded to reel off five straight top-five finishes, including three poles in a row (at Phoenix, Fontana and Martinsville) and a victory at Fontana in the Auto Club 400. Truex and his Bass Pro Shops/5-Hour Energy Toyota led 125 of the 200 scheduled laps that weekend and finished almost 12 seconds ahead of runner-up Kyle Larson.

Suddenly, a title defense didn’t look all that impossible.

Truex and his Furniture Row Racing teammates demonstrated their hard-charging competitive mettle during the first 10 races of the 2018 Cup schedule. By the conclusion of the GEICO 500 at Talladega, Truex and FRR had already recorded four poles, three wrecks (including the Talladega event in April) and one win. The team struggled mightily all year at Bristol Motor Speedway and wrecked in both races at the high-banked short track, finishing 30th in April (in the Food City 500) and August (in the – ironically enough – Bass Pro Shops/NRA Night Race).

Truex rebounded nicely during the following 10 Cup races with nine top-five finishes, including trips to Victory Lane at Pocono, Sonoma and Kentucky. Only at Michigan in June did the No. 78 Toyota wind up outside the top-five with an 18th in the FireKeepers Casino 400. A pole position at Kentucky gave Truex a sweep in the Quaker State 400 Presented by Walmart. As the MENCS schedule headed for its second stop at Pocono Raceway, Truex and company were firmly among the Big Three for the 2018 Cup season.

But then it happened. The brutally-delicate nature of motorsports economics reared its ugly and unfortunate head. In July it was announced that primary sponsor 5-Hour Energy was going to drop Furniture Row Racing at the end of the year. This news was far from surprising as rumors had been circulating around the garage area regarding the company’s future in NASCAR. Nonetheless, Truex and team were faced with a most difficult task, even for the reigning MENCS champions: find and sign viable primary sponsorship for 2019.

The mid-July announcement set into motion a chain of events that put NASCAR Nation on notice about the precarious nature of big-time racing. In August, team owner Barney Visser declared that not racing in 2019 was not an option. By Sept. 4, the team’s future took a turn toward the terminal as Visser announced that Furniture Row Racing would shutter its doors and layoff its personnel after the season finale at Homestead-Miami. Visser was putting his personal money into the team – a spending habit that could only be sustained if he borrowed funds from other sources.

Regardless of how successful Furniture Row Racing had become in recent years, there were no capable primary sponsors on the horizon. The team accepted its future, but it wasn’t closing up shop without taking one last shot at the Cup Series championship.

Following the win at Kentucky on July 14, Truex and FRR scored two more top-five finishes before the start of the 2018 playoffs. One of these top fives was a second at Watkins Glen where he finished runner-up to Chase Elliott, who earned his first career MENCS victory. Once the playoffs began, Truex showed his title-winning consistency by notching back-to-back third-place finishes in the two opening events at Las Vegas and Richmond.

Firmly entrenched in the second round of the post-season, Truex set his sights on winning the inaugural race on the Charlotte Motor Speedway ROVAL. While leading at the white flag and into the final turn off the oval portion of the track, Truex gave second-place challenger Jimmie Johnson a run at the inside line.  Johnson’s No. 48 Chevrolet experienced wheel hop while alongside Truex’s No. 78 Toyota through the corner and the two cars made contact as they raced toward the final chicane. As Johnson and Truex spun, Ryan Blaney saw an opportunity and took the checkered flag. Truex finished 14th at the ROVAL and headed into the next playoff round.

It was Truex’s third-place run at Dover and some always-valuable playoff points that advanced him into the next round of the post-season. Two consecutive top-10 finishes (at Martinsville and Texas) allowed Furniture Row Racing to set its sights on Ford Championship Weekend at Homestead-Miami. Truex put up a fight in the season’s final event, starting third and leading 20 of the 267 total laps, including four after the last restart. Unfortunately, consecutive MENCS championships for Truex failed to materialize; his Toyota was overtaken by Joey Logano’s Ford with 12 laps remaining. While Logano stayed out in front to win his first Cup Series title; Truex finished second and missed winning another Cup championship by one position in the finishing order.

Despite running nearly one-third of the 2018 MENCS season with a lame duck team, Truex managed to win five poles, four races and wind up second in points as defending champion in the series. He completed 95.2 percent of all laps run in 2018, even with five DNFs.

As Furniture Row Racing ceased to exist, Truex and crew chief Cole Pearn found a new home with the No. 19 Toyota of Joe Gibbs Racing (the car driven in 2018 by Daniel Suarez). Their 2019 MENCS effort will be backed by Bass Pro Shops and Auto-Owners Insurance.