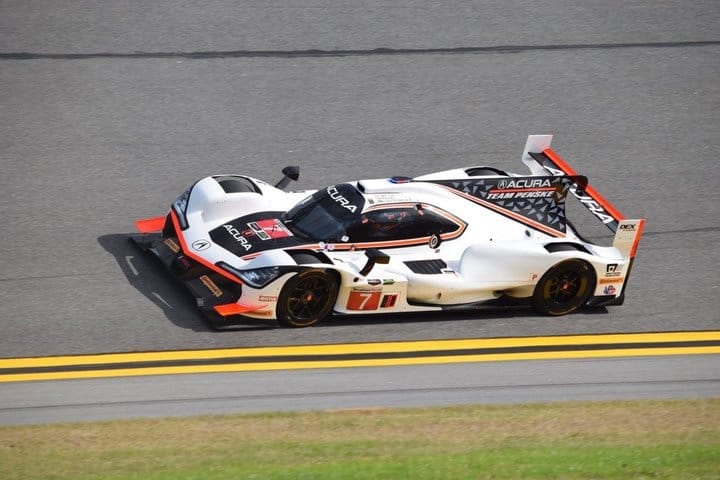 The calendar has turned to 2019 and it’s already time for IMSA WeatherTech SportsCar Championship teams to travel to Daytona Beach for three days of testing ahead of the Rolex 24 at Daytona.  After rumors of an oversubscribed field earlier in the offseason, an entry list of 47 teams has been revealed.  This is a slight decline on the 50 teams that competed in last year’s event.  As per IMSA rules, WeatherTech SportsCar Championship teams that intend to compete in the Rolex 24 at Daytona must compete in the Roar.  There is no such requirement for drivers.

As previously reported, the Prototype class has been split for 2019.  The DPis are now their own class while the LMP2 cars are their own, Pro-Am class.

There are 11 DPis entered at the test.  The class will likely once again be dominated by the Cadillac DPi-V.R.s.  There are now six of them on the grid for the full season.   The three full-time cars from last season (two for Action Express Racing and one for Wayne Taylor Racing) are back, while JDC-Miller MotorSports is running two more.  Finally, Juncos Racing joins the series with a sixth one.

Acura Team Penske is back with their Acura ARX-05s.  The only change there is that Alexander Rossi is in the No. 7 in place of Graham Rahal, who had trouble fitting into the car.  Mazda Team Joest announced endurance driver changes earlier this year.  Olivier Pla will join regulars Jonathan Bomarito and Harry Tincknell in the No. 55 in place of Spencer Pigot.  Timo Bernhard will be the endurance driver in the No. 77, but René Rast will still be back for Daytona and Sebring.  Finally, CORE autosport has acquired a Nissan DPi to join the class.

Extreme Speed Motorsports has folded after the departure of Tequila Patrón.  Also, Spirit of Daytona Racing will not compete with their Cadillac.

The LMP2 class has only four entries, two of which will be full-time.  Joining the full-time entries from PR1 Mathiasen Motorsports and Performance Tech Motorsports are two entries from DragonSpeed.  The team has not indicated which driver lineup will drive each car.  One will feature the team’s full-time European Le Mans Series lineup of Ben Hanley (who will make his INDYCAR debut in March), Henrik Hedman and Nicolas Lapierre.  The other will feature the team’s LMP2 lineup in the FIA World Endurance Championship, led by former Formula 1 racer Pastor Maldonado.

Unfortunately Larry will not be at the Roar this year. Little E. hasn’t decided to come out yet and I decided I don’t want to miss the birth of our child. I’ll be there in three weeks and hopefully bring back her first Rolex. Thanks to Porsche for the support on this.

Risi Competizone is back and has Miguel Molina and Davide Rigon for the test.  The team plans on having four factory drivers for the race.

Finally, there are 23 GT Daytona teams entered.  A number of new and returning full-time squads are represented.  Starworks Motorsport is back after missing the last couple of seasons.  PFAFF Motorsports has moved over from Pirelli World Challenge.  AIM Autosport has returned to the series after years away with the new AIM Vasser Sullivan team.  Moorespeed has moved up from the IMSA Porsche GT3 Challenge Cup.   Precision Performance Motorsports moved up from Lamborghini Super Trofeo North America (although they do plan to keep their presence there).  Also, Herberth Motorsport has joined with NGT Motorsport to field a Porsche 911 GT3 R.

Meyer Shank Racing with Curb-Agajanian is back with their two entries, but a driver change has already been made.   Last week, the team announced that Jackie Heinricher had suffered a back injury that will keep her out of the Roar and the Rolex 24 at Daytona.  She’ll still be present, but the team has signed two-time GT Daytona champion Christina Nielsen to drive in her place.

2019 is the 50th anniversary of the founding of IMSA.  There will be throwback schemes.  The first of these schemes was unveiled Thursday (Jan. 3) as Riley Motorsports revealed new sponsorship from Wynn’s.

Our Mercedes AMG GT3 just rolled off the truck with our new 2019 IMSA 50 years retro anniversary livery. Hope you like it! pic.twitter.com/M8eGfFs5hX

In 2019, IMSA will be celebrating the 50th anniversary of the sanctioning body’s founding.  Riley Motorsports’ scheme, which is a throwback to the Hotchkis Racing Porsche and Spices of the late 1980s and early 1990s, is the first of what will likely be many throwback schemes this year.

The opening on-track session of the weekend is scheduled for 11 a.m. on Friday.  The DPi, LMP2 and GT Le Mans teams will be on-track through Sunday, while GT Daytona teams will be on-track Friday and Saturday.  All classes will finish their testing with an all-out qualifying session (GT Daytona on Saturday, others on Sunday) that will determine pit box and garage assignments.  We will have testing recaps all weekend here at Frontstretch.