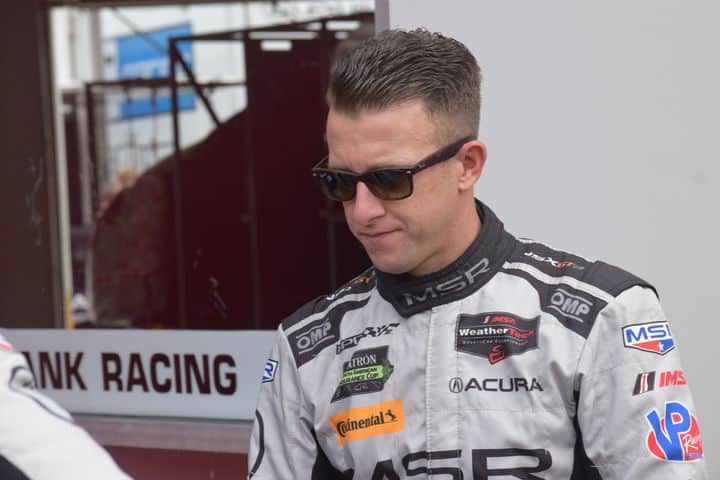 NBC Sports revealed their broadcast booth lineup for the 2019 IMSA season Thursday night (Jan. 3).  Leigh Diffey will serve as the play-by-play commentator for IMSA races in addition to his work on INDYCAR broadcasts.  He will be joined by Calvin Fish, the sole booth holdover from last year’s coverage with FOX Sports.  Finally, as previously announced on Dec. 19, AJ Allmendinger will round out the booth as an analyst.

For Diffey, commentating on sports car races is nothing new.  He’s been in and out of sports car racing coverage here in the United States for the last 15 years.  For example, Diffey was on the call for this infamous bash-fest between Max Papis and Jan Magnussen at Homestead in 2004.

Diffey spent time as the play-by-play commentator of both the American Le Mans Series and Grand-Am Rolex Sports Car Series from 2003-2012.  That stint was briefly interrupted by a return to his native Australia to call V8 Supercars races for Network Ten.  He’s also called SPEED World Challenge races, INDYCAR races and an occasional NASCAR race as well.

Fish, who is a past class winner in the Rolex 24 at Daytona, has decades of experience in the booth, dating back to before his driving career ended.  He’s worked as an analyst for ESPN, SPEED and FOX Sports 1 in the past.  Primarily, his work has focused on the IMSA WeatherTech SportsCar Championship and Continental Tire SportsCar Challenge (now the Michelin Pilot Challenge), but he has worked on broadcasts for the FIA World Endurance Championship, the former Oldsmobile Pro Series and more.

Allmendinger is the unknown here.  Broadcasting will be a new frontier for the Monster Energy NASCAR Cup Series veteran.  While he’s never raced a full season in sports cars, he does have 13 career starts between the Grand-Am Rolex Sports Car Series and the IMSA WeatherTech SportsCar Championship.  He won the 2012 Rolex 24 at Daytona for Michael Shank Racing in a thrilling duel with a similar Ford Riley from Starworks Motorsport.  That win is Allmendinger’s only career sports car victory.

Allmendinger is also entered in the Rolex 24 at Daytona in Meyer Shank Racing with Curb-Agajanian’s No. 86 Acura NSX GT3 Evo alongside Mario Farnbacher, Trent Hindman and Justin Marks.  It is currently unclear what NBC Sports’ plans will be to compensate for Allmendinger’s lack of availability (or capitalize on it).

NBC Sports did not announce any additional analysts (a must for the endurance races) or pit reporters on Thursday.  They will be officially announced at a later date.  However, based on tweets, a couple more existing NBC Sports on-air personalities could be involved.

Rick Allen, play-by-play commentator for NBC Sports’ coverage of the Monster Energy NASCAR Cup and Xfinity Series, appears to have some kind of involvement at Daytona (at least) as well.

I’m excited to experience it in person!! And be a part of it. https://t.co/ROjv4NAM6b

Steve Letarte is currently in Daytona to check out the Roar Before the 24.  In addition, Kelli Stavast has previously covered sports car racing from her days with ESPN and SPEED.