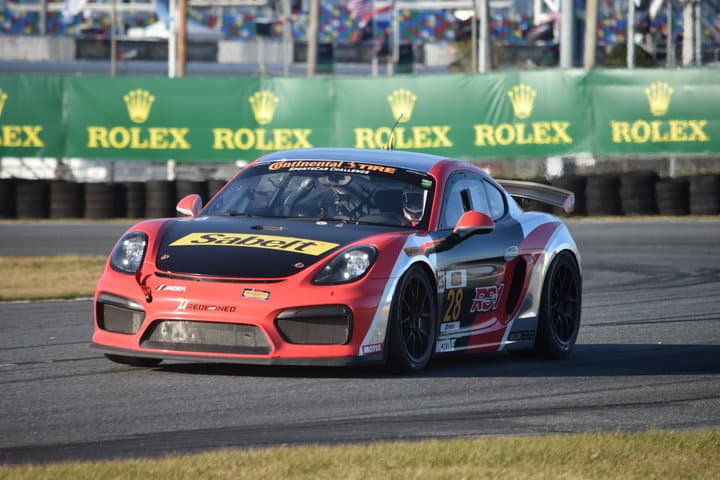 To NASCAR fans, Charlie Luck is best known as a driver in the early days of what is now the Xfinity Series, competing as an owner-driver in a No. 45 sponsored by Luck Stone, a family business.  Then, he stopped competing after 1986.  After decades away, he returned to racing in 2017.  This weekend, he’s making his debut in GT4 equipment.  So far, he’s making the best of it.

Luck, driving the No. 28 Porsche Cayman GT4 MR for Rennsport One, turned in a lap at 112.146 mph to top the session and the day.  This lap was more than eight-tenths of a second faster than the overall pole for last year’s BMW Endurance Challenge at Daytona.  That pole was won by Spencer Pumpelly, who just so happened to be driving for the team last year.

Rebel Rock Racing’s Frank DePew was sixth fastest in the lone Chevrolet Camaro GT4.R on the premises.  Riley Motorsports’ James Cox was seventh, followed by Pumpelly, who is driving for The Racers Group.  NolaSport’s Jason Hart and Park Place Motorsports’ Trent Hindman rounded out the top 10.

Despite Luck having a big advantage over the rest of the field, the drivers immediately behind him were much more closely bunched together.  Russell Ward in second was less than one second faster than Tom Dyer in 15th.

TCR saw LAP Motorsports top the chart.  Mike LaMarra was fastest in the No. 37 LA Honda World Racing Honda Civic Type-R TCR with a lap at 106.200 mph.  The lap, which was good enough for 32nd overall, was two-tenths of a second faster than JDC-Miller MotorSports’ Stephen Simpson.  eEuroparts.com ROWE Racing’s Lee Carpentier was third fastest in his Audi, followed by HART’s Chad Gilsinger.  Atlanta Speedwerks’ Brian Henderson was fifth quickest.

In the afternoon session, the champions came to play.  TeamTGM’s Owen Trinkler was fastest overall with a lap at 111.622 mph.  That lap was two-tenths of a second faster than Hindman in the No. 7  Porsche.  Note that Hindman and teammate Alan Brynjolfsson are sharing the Nos. 7 and 77 Porsches this weekend.

LaMarra slowed down by three-tenths of a second in the afternoon session, but he was still quick enough to top the TCR class in 31st overall.  His lap of 105.935 mph was eight-hundredths of a second faster than Simpson.  Colin Mullan was third fastest in the second LA Honda World Racing Civic, followed by Henderson.  Gavin Ernstone was fifth fastest in the Roadshagger Racing Audi.