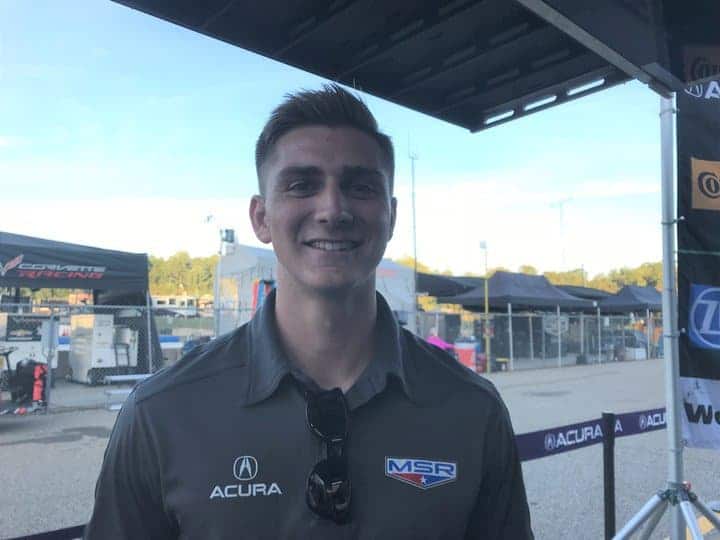 Trent Hindman got to sit in his Porsche Cayman GT4 MR for the first time on Thursday morning.  It did not take him long to get up to speed.  Saturday afternoon (Jan. 5), Hindman turned in the fastest lap of the day with a lap at 112.664 mph.

In the morning session, it was another yellow Porsche that led the way.  This Porsche, the No. 47 nolaSport entry with Jason Hart at the wheel, turned a lap at 112.657 mph to top the list.  Hart’s lap was two-tenths of a second faster than The Racers Group’s Spencer Pumpelly.  Scott Hargrove was third fastest in the No. 13 Porsche, followed by Russell Ward in the Winward Racing/HTP Motorsport Mercedes.  KohR Motorsports’ Kyle Marcelli was fifth in his Ford Mustang GT4.

Rennsport One’s Jan Heylen was sixth fastest, followed by CarBahn Motorsports’ Jeff Westphal.  TeamTGM’s Hugh Plumb was eighth, while Bryce Ward in the No. 57 Mercedes and Tyler Cooke in the eEuroparts ROWE Racing Audi rounded out the top 10.

The session was not trouble free for everyone.  Paul Nemschoff crashed the No. 31 Bodymotion Porsche extensively.  The damage was too great to repair in Daytona, forcing the team to pack up early and make the haul back to New Jersey to fix their car.

TCR saw LA World Honda Racing’s Tom O’Gorman top the charts with a lap at 106.379 mph, good enough for 31st overall.  O’Gorman’s lap was one-seventh of a second faster than JDC-Miller MotorSports’ Michael Johnson in his Audi.  Lee Carpentier was third quickest in his Audi, followed by Jon Morley in the similar Roadshagger Racing Audi.  Shelby Blackstock was fifth in LA World Honda Racing’s No. 73.

In the afternoon session, Hindman’s VOLT-sponsored No. 7 Porsche was fastest overall.  His lap was a mere seven-thousandths of a second faster than Hart’s best time from the morning.

Hindman’s lap was one-seventh of a second faster than Murillo Racing’s Eric Foss in the No. 56 Mercedes.  CarBahn Motorsports’ Tyler McQuarrie was third in his Audi, followed by Pumpelly.  Hart was fifth fastest in his Porsche.

Winward Racing/HTP Motorsport’s Indy Dontje was sixth fastest, then TeamTGM’s Owen Trinkler.  Marcelli and Ty Majeski were eighth and ninth in their Fords, while Hargrove was 10th.

Roadshagger Racing’s Morley turned the fastest lap of the Roar to this point for a TCR car (106.574 mph) to top the chart in 31st overall.  Morley’s lap was a quarter of a second faster than the Honda of Atlanta Speedwerks’ Todd Lamb.  HART’s Ryan Eversley overcame some teething issues to be third in class, followed by eEuroparts.com ROWE Racing’s Kieron O’Rourke.  Johnson was fifth quickest.

After the session ended, a big penalty was handed down to the LA Honda World Racing team.  According to SportsCar365.com, both of the team’s Honda Civic Type-R TCRs were parked for the weekend after Session No. 4 after the cars were found to be underweight.  According to IMSA’s own Balance of Performance tables, the Honda Civic Type-R TCR must weigh a minimum of 1300 kilograms (2866.009 pounds).