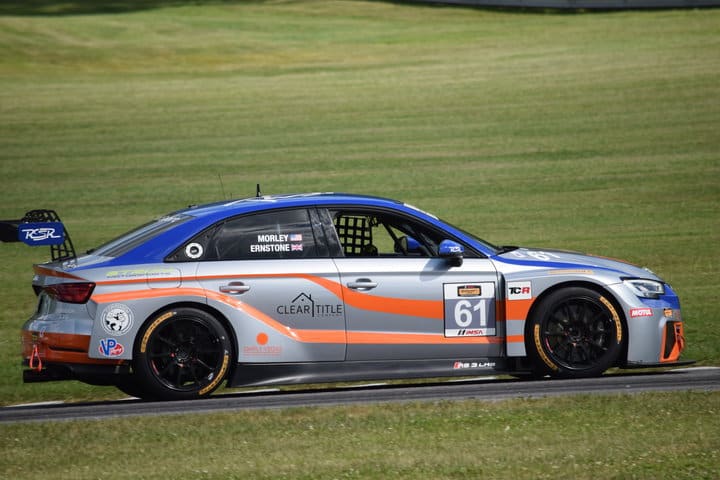 For Park Place Motorsports, they will have a big decision to make once they get back to their shop.  Which car should they race in the BMW Endurance Challenge?  The No. 7 was fastest overall on Saturday (Jan. 5) in the hands of Trent Hindman.  In the No. 77 on Sunday, Hindman went even faster.

In the final session of the test, Hindman was once again quickest overall, this time with a lap at 112.336 mph.  That lap was nearly two-tenths of a second faster than KohR Motorsports’ Nate Stacy in a Ford Mustang GT4.  Machavern was third quickest, followed by Hohenadel and Travis.

Rebel Rock Racing’s Robin Liddell took his Chevrolet Camaro GT4.R to sixth on the chart, while Devin Jones was seventh in his BMW.  Mosing was eighth, while Winward Racing/HTP Motorsport’s Russell Ward was ninth.  Rod Randall in KohR Motorsports’ No. 59 Ford was 10th.

Roadshagger Racing’s Jon Morley turned in the fastest TCR lap of the entire weekend to top the final session.  The lap of 106.889 mph was the only TCR lap of the weekend to take under two minutes.  Morley’s lap was 1.25 seconds faster than Henderson’s Honda and Kieron O’Rourke‘s Audi.  Ryan Nash was fourth in the No. 12 eEuroparts.com ROWE Racing Audi, while KMW Motorsports’ Tim Lewis Jr. was fifth in his Alfa Romeo.  Only 30 of the 40 teams took time in the final session.

IMSA MICHELIN PILOT CHALLENGE ROAR BEFORE THE 24 SESSION NO. 6 RESULTS

For the weekend overall, the new Porsche Cayman GT4 MR was the story in Daytona.  The top five fastest drivers and six of the top 10 were driving the new Caymans.

Michelin Pilot Challenge teams will return to Daytona in a couple of weeks for their season opener.  Frontstretch will be there to bring you all the action.