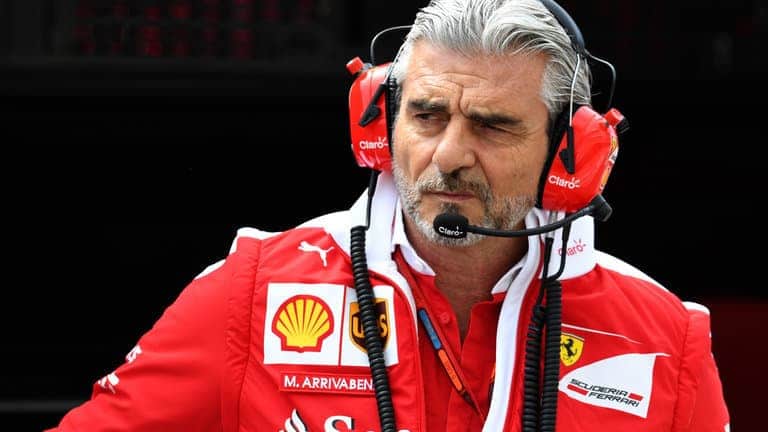 Maurizio Arrivabene is out at Ferrari after four difficult years (credit: FIA images)

On. Monday (January 7, 2019) Scuderia Ferrari announced on their website that Maurizio Arrivabene will leave the Prancing Horse as Team Principal and will be replaced by Technical Director Mattia Binotto. The move comes a little over four years after Arrivabene was named principal in the months leading up to Ferrari’s resurgent 2015 season, a year when the team notched three wins with Sebastian Vettel and finished second in the Constructors Standings.  That year saw marked improvement with a tally of 428 points after scoring only 216 points in 2014 and finishing fourth in the Constructors Standings under former team boss, Marco Mattiacci.

Arrivabene has been involved with Ferrari and F1 as a whole for the better part of two decades, joining Philip Morris in 1997 with Marlboro and working with the company’s sponsorship with Ferrari. Arrivabene represented all of the sports sponsors when he sat on the Formula One Commission in 2010 and in the years that followed. In 2014, when Sergio Marchionne rejuvenated the team when he deposed former Ferrari Chairman, Luca Di Montezemolo, Maurizio Arrivabene was the guy tapped with the large responsibility of bringing a legendary team that is Ferrari back to the top of F1.

After a tough 2016 that did not live up to the expectations built on a strong 2015 season, the pressure doubled on Arrivabene’s shoulders to bring the Scuderia up to the pace of Mercedes. The following year, 2017, was a great bounce-back where the team took five victories, 522 points, and were in a position to battle for the title – but mistakes towards the end of the season cost the team a shot at the title. Many thought that Arrivabene could have been sent away after the disappointing end to the 2017 season, but reasons such as Mercedes’ superior car mitigated the blame on Arrivabene.

However the 2018 season, unsurprisingly marks the end of Arrivabene’s tenure as Team Principal for Ferrari as the team not only threw away both championships after being in a position for victory following the summer break. A potentially larger issue within the team surrounded Arrivabene’s leadership style that many within the paddock, including Will Buxton, saw as system that was based on fear of failure. This notion goes against what Arrivabene created himself as in the public, the well groomed, experience Italian had charm and a large smile that some would think would be indicative of his leadership style. It seemed, rather, that the man behind closed doors was the true Maurizio Arrivabene.

Whether or not he was just being Sergio Marchione’s puppet to destroy the legacy created by Di Montezemolo, or Arrivabene was power hungry and abrasive, Ferrari team members constantly looked over their shoulders in fear. Too much pressure causes a break, and after Ferrari failed to match Mercedes’ post-summer break upgrades and lost races in uncompetitive style in Singapore and Russia, it seemed the pressure did just that to the Ferrari team.  The result caused anger and deep divisions within the team and ruined their chance at success. Reports hummed around the F1 world that Arivabene, and the man who would eventually replace him, Binotto where at odds over the team’s direction towards the end of the season, only digging the wedge further between the higher ups of Ferrari and the employees of the team.

This is sports, and when there is overwhelming evidence from both performance and behind closed doors interactions, it is time for change. However what is bad for Ferrari is that turnover seems to be a constant for Ferrari after the Jean Todt years. Ferrari has seen three new team principals in that span of the time and a change at the helm from Di Montezemolo to Sergio Marchione, who was then replaced by Mike Manley after Marchionne fell ill that eventually led to him passing away in July. All of this change while Mercedes has kept the same team together, mostly, since 2013. While their car has been much better since the beginning of the hybrid era, the continuity has helped the team to five world championships. Ferrari is hoping that the move to make Binotto the team boss will set the team up for a strong 2019 and beyond with a refreshed attitude from the top down within the Ferrari organization.

Mattia Binotto joined Ferrari in 1995 as a Test Engine Engineer and fulfilled the same role from 1997-2003. Binotto held many high up technical positions for Ferrari through the 2000s and eventually became Deputy Director, Engine and Electronics in 2013 before being named Technical Director in 2016. Like, Arrivabene, Binotto has a long standing relationship with the Scuderia, however Binotto is more on the technical side as Arrivabene spoke on the behalf of the business operations. Time will tell if the change to a more technical team boss will bode well for a 2019 with many question marks in the air concerning the aerodynamics of the car following the new regulation changes for the new season.

The fear of failure or lack of success at Ferrari was evident in the movie Grand Prix fifty years ago starting with Enzo. But the same is true for all drivers: no wins = no ride. At least most (male) drivers.

As one writer said about the 2018 season. “Ferrari had the best car and the worst team”. That was laid at the feet of the team principal, Sergio intended to make this change, his replacement is following through. How much difference it will make remains to be seen.