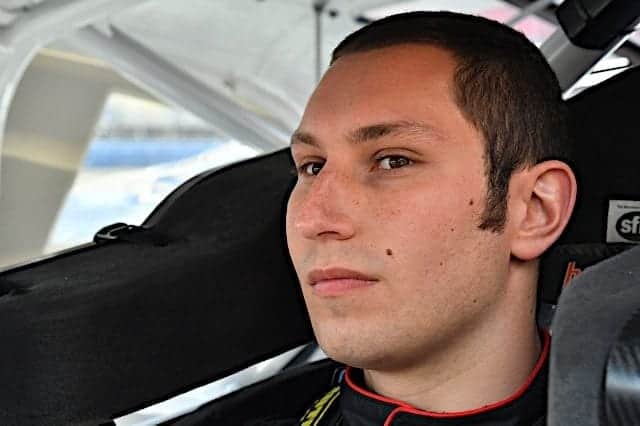 “I’m pumped to get back on track at Daytona behind the wheel of an IMSA car,” Grala stated in a press release.  “I’ve had success there on both the road course and the oval, and it has easily become one of my favorite tracks in the country. Though I have competed in the Rolex 24 twice since then, I haven’t driven in the IMSA Michelin Pilot Challenge in five years — so I’m sure it will take a few laps to get readjusted to the car. Unlike my stock car, I’ll be working with an anti-lock braking system, traction control, and advanced electronics all while paddle shifting, which totally changes the driving style needed to get the most out of the race car. I’ve known Aurora for years, and am eager to co-drive with her for the first time. We are going to have a blast going for that top spot.”

As Grala noted, he has very limited experience in IMSA Michelin Pilot Challenge.  He has only one previous start in the series.  That was in 2014 at Daytona.  Sharing a BMW M3 for Rum Bum Racing with 2018 Grand Sport champion Hugh Plumb, Grala finished fifth on the road.  After the winners from Turner Motorsport were disqualified for flunking post-race technical inspection, Grala and Plumb were elevated to fourth.

Having said that, this will not be Grala’s first time racing during the Rolex 24 weekend.  He has two previous starts in the Rolex 24 at Daytona for Change Racing in 2016 and 2017.  The 2016 race was the better of the two as the team was contending until teammate Justin Marks collided with Paul Miller Racing’s Bryce Miller while fighting for the class lead 10 hours in.   The 2017 race saw Grala and company run into problems almost immediately and retire after completing only 79 laps.

Straus comes to BimmerWorld Racing after competing full-time in Pirelli World Challenge GTS SprintX in 2018 for ST Racing.  Sharing her BMW with Al Carter and Jon Miller, Straus claimed two victories in the Am class and finished second in Am points.

“I am elated to remain with BMW for the 2019 season after such a successful season last year,” Straus stated.  “The M4 GT4 car is an exceptional platform, and I’m looking forward to what will certainly be a strong program with BimmerWorld and Kaz.”

Straus has two previous starts at Daytona in the IMSA Michelin Pilot Challenge.  In 2017, she shared a Street Tuner-class Porsche Cayman with Connor Bloum and finished fourth in class.  Last year, she drove an Aston Martin for Automatic Racing.  Straus was quick early on, but her teammate Steven Phillips got caught up in this multi-car incident, which ended their day.

In BimmerWorld Racing and the BMW M4 GT4, Grala and Straus likely have a very good package underneath them for Daytona.  Last year, BimmerWorld Racing’s No. 82 for team owner James Clay and Tyler Cooke finished second overall.  The car appeared to be relatively gentle on tires, allowing both BimmerWorld and Classic BMW to charge forward late.

The BMW Endurance Challenge at Daytona is scheduled to go green at 12:15 p.m. on Jan. 25.  The race will air live at IMSA.com and FansChoice.tv.  Frontstretch will be on-site in Daytona to bring you all the action.