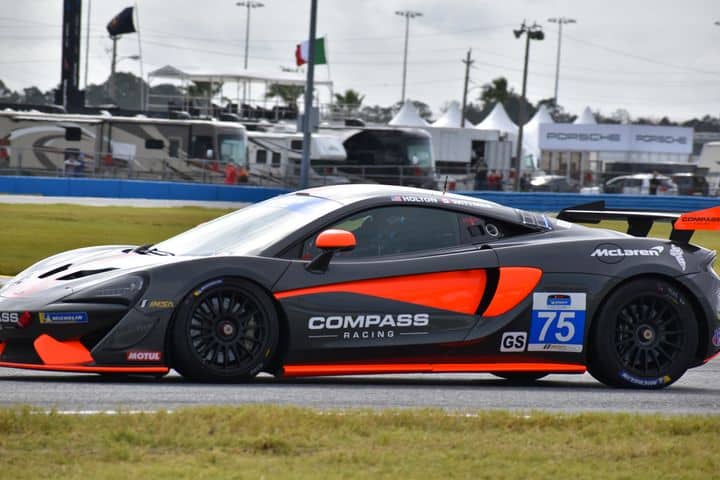 A line of thunderstorms descended upon all of Central Florida early Thursday morning, drenching the track and everything around it with a bunch of rain.  Lighting was visible around the track, forcing those present to take cover.

By the time practice was scheduled to start at 9 a.m., the rain had all but stopped.  However, the track was still very wet.  With no real rain in the forecast for the rest of the weekend, a situation somewhat similar to what Xfinity Series teams at Watkins Glen faced last year.  There was next to no point in going out on track because you wouldn’t learn anything.

That said, 12 of the 49 teams did in fact venture onto the 3.56-mile road course.  The quickest of those drivers was Indy Dontje in Winward Racing/HTP Motorsport’s No. 33 Mercedes-AMG GT4.  Dontje’s fast lap was at 103.138 mph, roughly 11 seconds off of the best times during the Roar.

Dontje’s best lap was two-tenths of a second faster than teammate Christian Hohenadel in the No. 57 Mercedes.  Park Place Motorsports’ Trent Hindman was third in his Porsche, followed by Robby Foley in Turner Motorsport’s BMW M4 GT4.  Motorsport in Action’s Jesse Lazare was fifth in his McLaren.

Only three of the 14 TCR teams entered set times during the session.  Of those three, Fast MD Racing’s James Vance was fastest with a lap at 97.584 mph, good enough for eighth overall.  Vance’s time was seven seconds faster than Mason Filippi in Bryan Herta Autosport with Curb-Agajanian’s No. 21 Hyundai.

The second session of the day was held in much drier conditions and the speeds rose as a result.  Wittmer’s chart-topping lap was set relatively late in the session and held up for the remaining 19 minutes.

Wittmer’s lap was only two-hundredths of a second faster than Lazare’s McLaren.  Rebel Rock Racing’s Andrew Davis was third fastest in the sole Chevrolet Camaro GT4.R, followed by TeamTGM’s Hugh Plumb in his Mercedes.  Hindman was fifth quickest.

Hohenadel was sixth quickest, then eEuroparts.com ROWE Racing’s Kenton Koch in the best of the Audi R8 LMS GT4s.  Jeroen Bleekmolen in Riley Motorsports’ Mercedes was eighth, while The Racers Group’s Spencer Pumpelly and BimmerWorld Racing’s James Clay rounded out the top 10.

The session did not pass without incident.  11 minutes in, Rennsport One’s Charlie Luck spun at Turn 6 and backed into the wall to bring out a red flag.  Luck was able to walk away, uninjured.  The team’s new Porsche Cayman GT4 MR was in much worse shape.

Bad news for @rennsport_one fans; The No. 28 Porsche has crashed in Michelin Pilot Challenge Practice No. 2. Charlie Luck was driving when he backed into the wall. He’s ok. The car is not. pic.twitter.com/TyAaTfx3az

At last check, the Rennsport One crew was hard at work in the garage to get their Porsche fixed.  In the picture above, you can see that the left rear wheel was wedged up into the fender, making the normally quick task of removing the left rear wheel take upwards of 10 minutes.

In TCR, it was JDC-Miller MotorSports’ Audi that was quickest with recent signee Mikey Taylor at the wheel.  Taylor was clocked at an average of 107.055 mph, a lap that was good enough for 35th overall.  In addition, Taylor’s lap was faster than any turned in by a TCR driver during the Roar Before the 24 three weeks ago.

Taylor’s lap was one-third of a second faster than the No. 89 Honda of America Racing Team (HART) with Ryan Eversley at the controls.  Ryan Nash in the No. 12 eEuroparts.com ROWE Racing Audi was third quickest, followed by Atlanta Speedwerks’ Brian Henderson.  Lee Carpentier in the second eEuroparts.com Audi was fifth.

In the 30-minute third practice session, Riley Motorsports’ Dylan Murry put his Wynn’s Mercedes on top of the chart with a lap at 112.096 mph.  Murry’s lap was one-sixth of a second quicker than KohR Motorsports’ Kyle Marcelli in his Ford Mustang GT4.  Wittmer was third quickest, followed by TeamTGM’s Owen Trinkler and PF Racing’s Jade Buford in another Ford.

TCR saw LA Honda World Racing’s Mat Pombo top the class with a lap at 106.627 mph, good enough for 33rd overall.  Pombo’s lap was nearly a quarter of a second faster than Vance in his Audi.  Roadshagger Racing’s Jon Morley, who was fastest in class at the Roar, was third quickest.  Eversley and JDC-Miller MotorSports’ Michael Johnson were fourth and fifth.

Qualifying for the BMW Endurance Challenge at Daytona is scheduled to begin at 5:25 p.m. EST today here in Daytona.  There will be a brief pre-qualifying warm-up prior to the session beginning.