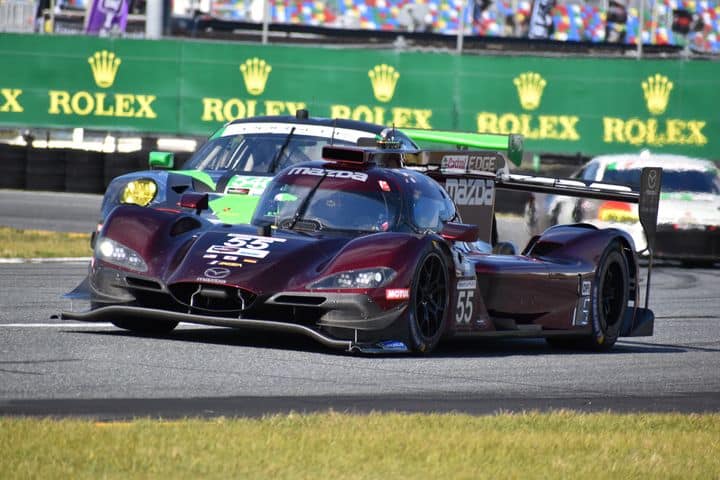 Mazda Team Joest continued to show Thursday (Jan. 24) that they have very good single-lap speed at Daytona International Speedway.  During the second practice session, Jonathan Bomarito turned in a lap at an average of 135.373 mph to top the sessions for the day.

Early morning rains swept through Daytona Beach, leaving the track surface wet.  While it was not raining at the start of the session, rain clouds did push through and drop some more rain on the circuit early in the session.  The track only truly dried out in the final 15 minutes.  The result was a jumbled order.

Action Express Racing’s Felipe Nasr was fastest overall with a lap at 133.350 mph.  This lap was set in the final three minutes of the session for prototypes.  Nasr’s lap was six-tenths of a second faster than teammate Filipe Albuquerque in the Mustang Sampling Cadillac.  A third Cadillac, JDC-Miller MotorSports’ No. 85 for Tristan Vautier was third fastest, followed by Bomarito in the No. 55 Mazda.  From there, there was a huge drop-off.  Juncos Racing’s René Binder was fifth quickest in his Cadillac, but he was a full 10 seconds off of Nasr’s pace.

The fastest LMP2 team in the session was the DragonSpeed No. 81, driven by Henrik Hedman.  Before the track dried, Hedman was as high as fourth overall.  Ultimately, the fastest of the ORECA 07-Gibsons ended up 11th overall with a lap at 120.161 mph.  That lap was eight-tenths of a second faster than teammate Sebastian Saavedra.

In GT Le Mans, Porsche GT Team’s two Porsche 911 RSRs were at the top of the charts for the whole practice.  Once the track dried out, they were able to put down decent laps on dry tires.

When the session ended, Frédéric Makowiecki was fastest with a lap at 121.670 mph, good enough for fifth overall.  Makowiecki was eight-tenths of a second faster than teammate Mathieu Jaminet in the No. 912 Porsche.  Joey Hand was third quickest in the No. 66 Ford GT, but he was nearly two seconds off the pace.  Corvette Racing’s Antonio Garcia and Risi Competizione’s Alessandro Pier Guidi were fourth and fifth, respectively.

GT Daytona teams received an extra 15 minutes of practice at the end for Silver and Bronze-rated drivers.  Given the drying track late in the session, the time sheets were slightly skewed as a result.

Paul Miller Racing’s Corey Lewis ended up fastest in class with a lap at 120.251 mph, more or less right on the pace that was expected for dry conditions.  With the changeable conditions earlier in the session, the lap put Lewis in eighth overall.

Even with the drying track, the wet curbs did cause some issues late.  In the final minutes, Meyer Shank Racing with Curb-Agajanian’s Justin Marks clipped the curb exiting the bus stop chicane and splashed his way through the grass.  About a minute later, Precision Performance Motorsports’ Steve Dunn did the same thing and spun his Lamborghini.  Neither car was damaged and both drivers were able to continue.

In the afternoon practice session, Bomarito put his Mazda RT24-P on top with nine minutes remaining in the session with the best practice lap of the day.  The lap ended up being seven-tenths of a second faster than Albuquerque’s Cadillac.  CORE autosport’s Colin Braun was fastest for the majority of the practice session before dropping back to third late.  Acura Team Penske’s Ricky Taylor was fourth, while Juncos Racing’s Agustin Canapino was fifth.

LMP2 saw DragonSpeed’s James Allen lead the small class with a lap at 131.777 mph, good enough for 12th overall.  Allen’s lap was a quarter of a second faster than PR1 Mathiasen Motorsports’ Gabriel Aubry.  Pastor Maldonado was third fastest in the No. 18 DragonSpeed ORECA 07.

GT Le Mans saw Porsche GT Team continue their excellent form with another quick time.  This time, Nick Tandy was fastest with a lap at 123.856 mph, good for 16th overall.  Tandy’s lap was eight-hundredths of a second faster than Corvette Racing’s Jan Magnussen.  Ford Chip Ganassi Racing’s Ryan Briscoe was third, then Davide Rigon in the Ferrari and Dirk Müller in the second Ford GT.

Finally, GT Daytona was topped by Spirit of Race’s Daniel Serra.  Serra drove his Ferrari 488 GT3 around the 3.56-mile road course at an average speed of 120.979 mph.

During the night practice session, CORE autosport spent the vast majority of the session on top of the chart.  Braun was fastest early on, but Loïc Duval eclipsed his own co-driver in the final minutes of the session.

Duval’s lap of 135.210 mph was one-eighth of a second faster than Albuquerque.  The No. 5 team missed part of the session trying to fix the power issues that resulted in the team failing to set a time in qualifying.

LMP2 saw DragonSpeed’s Ben Hanley attempt to close the gap between himself and the DPi entrants.  Hanley’s best lap of the session was at an average of 132.779 mph, good enough for eighth overall and only 1.7 seconds off of Duval.

Hanley’s lap was more than half a second faster than Maldonado.  PR1 Mathiasen Motorsports’ Enzo Guibbert was another two-thirds of a second back.

GT Daytona saw one of the likely favorites run into mechanical problems.  The Montaplast by Land-Motorsport No. 29 Audi with Christopher Mies at the wheel suffered an engine issue and dumped oil on the infield portion of the course before pulling off.  The red flag was displayed for 15 minutes in order to clean up the oil.  As of this writing, the Montaplast by Land-Motorsport team is hard at work trying to fix the issue.

Turner Motorsport was able to fix the mechanical issues on their BMW M6 GT3 that forced them to miss qualifying.  Auberlen was able to set an unofficial track record lap at 121.866 mph to lead the chart.

WeatherTech SportsCar Championship teams have one practice session remaining prior to the race.  That is scheduled to be held at 10 a.m. Friday morning and will run for 60 minutes.