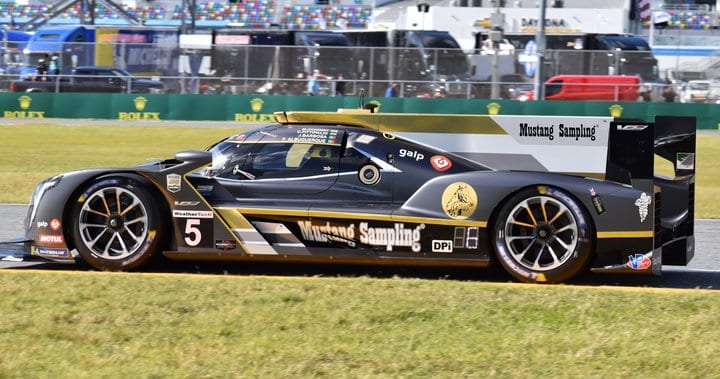 Albuquerque’s quickest lap was not an unofficial track record, but it was still plenty fast at 135.823 mph.  That lap was four-tenths of a second faster than Olivier Pla in Mazda Team Joest’s No. 55 Mazda RT24-P.  Pipo Derani was third fastest in the second Action Express Racing Cadillac, while Acura Team Penske’s Simon Pagenaud was fourth.  René Rast in the second Mazda was fifth quickest.

In LMP2, PR1 Mathiasen Motorsports managed to outrun DragonSpeed for the first time all weekend.  Enzo Guibbert was fastest with a lap at 132.901 mph, good enough for 10th overall.  Guibbert’s lap was more than half a second faster than DragonSpeed’s Nicolas Lapierre.  Roberto González was third fastest.

In GT Le Mans, trouble struck the defending champions from Ford Chip Ganassi Racing IMSA.  Late in the session, Sébastien Bourdais had an issue in Turn 5 and damaged the Motorcraft-sponsored No. 66.  Bourdais stopped the car on-track, causing the only red flag of the session.

At the time, the No. 66 Ford was the fastest in class.  In the final minutes of the session, Porsche GT Team’s Frédéric Makowiecki turned in the fastest lap of the day with an average speed of 125.061 mph, good for 15th overall.

Makowiecki’s lap was one-eighth of a second faster than Dirk Müller, who had turned in his lap in the No. 66 Ford prior to Bourdais’ incident.  Corvette Racing’s Jan Magnussen was third quickest, followed by Richard Westbrook in the second Ford GT.  Chaz Mostert was fifth quickest in the No. 24 BMW.

In GT Daytona, the times were even better than those set during qualifying on Thursday.  Spirit of Race’s Pedro Lamy was fastest in class with a lap at 122.486 mph.  The lap ended up being six-tenths of a second faster than Marcos Gomes‘ pole lap.

Coverage of the Rolex 24 at Daytona will begin at 2 p.m. EST on NBCSN.  The race is scheduled to go green at 2:35 p.m.  From there, the race will switch between NBCSN and the NBC Sports App.