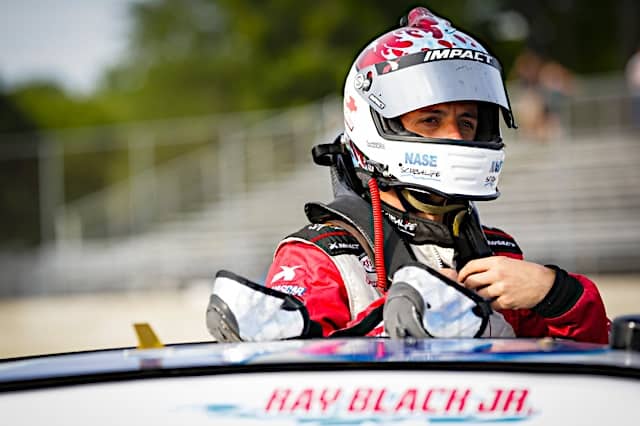 After not having a full-time NASCAR ride for the past two seasons, Ray Black Jr. is set to return to the sport’s Xfinity Series with SS-Green Light Racing for the 2019 season.

Black’s excited to rejoin the team with veteran car owner Bobby Dotter, as well as crew chief Jason Miller. Miller led the way for the No. 07 team through the entire 2016 season.

“It’s time to get back with him [Dotter], with all the experience I’ve gained over the past few years,” Black told Frontstretch upon returning to SS-Green Light Racing. “I’m ready to move to the next step. We still have a lot of work to do, and this year will be interesting. Hopefully, we can get some luck on our side and make a run for the playoffs. That’s the ultimate goal.”

The Florida native will once again drive the No. 07 car, though this time sponsored by Isokern Fireplaces for the 33-race schedule. Black will be teammates with Gray Gaulding, who will be behind the wheel of the No. 08 Chevrolet. Gaulding is moving to the Xfinity Series after spending the majority of the past two years in the Monster Energy NASCAR Cup Series.

Dotter believes the company has potential for 2019, coming off a season in which his former drivers, Joey Gase and Spencer Boyd, finished 20th and 26th in the championship standings, respectively.

“[I’m] Really excited to have Ray back, and with Gray, I feel like we can surprise some people this year,” Dotter said in a statement to Frontstretch.

This time around, Black wants to make more of an impact in the Xfinity Series and help SS-Green Light Racing take the next step as a race team.

“I love Bobby to death,” Black said. “He’s one of the first guys I met in NASCAR. It’s hard to find people as old school as he is and have been doing it that long and still love it the same as when they started.”

“Last year was tough,” Black said. “The year before I did part-time [schedule], but ran a pretty good majority of the races, so it wasn’t that bad. This past year, I ran 10 races, so it wasn’t a great feeling, but we had chances at good finishes. … I’m ready to get rolling at Daytona. My goal right now is to make our sponsor happy and have them come back the year after and let everyone know that Bobby is the real deal and he’s here to compete.”