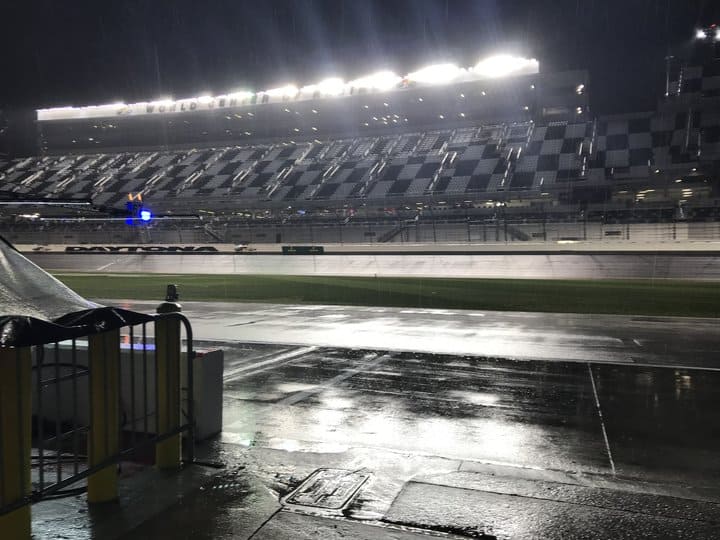 In the second third of the Rolex 24 at Daytona, Fernando Alonso came into his own.  The forecast rain showed up at the track around 5 a.m. and instantly caused problems.  Mazda Team Joest’s remaining RT24-P was trying to get back on the lead lap when the fuel issues cropped up again.  The car was hit from behind and spun out.  This time, the internal damage was just too much, forcing the team to retire from the race.  It is just more of the same for Mazda.  In 12 attempts between Speedsource and Mazda Team Joest, a Mazda factory prototype has never finished the race since the ALMS/Grand-Am merger.

Alonso acquired the lead and proceeded to run away from all of his rivals.  He was gapping the field by two to five seconds a lap, instantly building a huge lead.  In the 15th hour, Corvette Racing’s Tommy Milner aquaplaned on standing water entering Turn 1.  As a result, he lost control of the No. 4 Corvette and slid hard into the tires.  The crash brought out the 11th full course caution of the race.  The team was able to get back out after 30 minutes in the garage for repairs.

After running under yellow due to standing water for more than an hour, IMSA announced that the race was going back green.  However, before the teams could get back around to take the green, the race was red-flagged.

At the present time, Wayne Taylor Racing’s No. 10 Cadillac DPi-V.R. for Alonso, Kamui Kobayashi, Jordan Taylor and Renger van der Zande leads over the two Acura Team Penske entries.  The No. 6 with Dane Cameron at the wheel is second, followed by No. 7 with Ricky Taylor.  Action Express Racing’s No. 31 Cadillac with Pipo Derani driving is fourth.  CORE autosport’s Nissan DPi for Colin Braun is a lap down in fifth.

LMP2 has been dominated by DragonSpeed’s two ORECA 07-Gibsons.  The No. 18 was leading until the rains came, but Ryan Cullen had two off-course excursions within a short period.  The more significant of the incidents saw Cullen slide off at the International Horseshoe and nose into the tires.  That allowed the No. 81 with James Allen at the wheel to take the lead.  The No. 18 with Pastor Maldonado driving is three laps down in second.  Performance Tech Motorsports’ No. 38 with Kyle Masson driving is seven laps down in third.

GT Le Mans has been a hard-fought race for the whole distance so far.  The teams have rotated the class lead back and forth based on pit strategy and overall pace.  At present, Risi Competizione’s Alessandro Pier Guidi is leading the class in 11th overall over Porsche GT Team’s No. 912 with Laurens Vanthoor at the wheel.  Ford Chip Ganassi Racing IMSA’s Joey Hand is third, followed by Frédéric Makowiecki in the No. 911 Porsche.  Ryan Briscoe in the No. 67 Ford GT is fifth.  Seven of the nine teams in GT Le Mans are currently on the lead lap.

GT Daytona has been a back-and-forth affair as well.  Meyer Shank Racing with Curb-Agajanian’s No. 86 has been strong since the start and at the two-thirds mark currently leads with AJ Allmendinger at the wheel.  Allmendinger claimed the lead when Riley Motorsports’ No. 33 pitted a lap before the red flag to top off (remember, the thought was that the race was going to restart).

Coverage of the Rolex 24 at Daytona is ongoing.  NBCSN is live from Daytona all the way to the finish at 2:35 p.m.