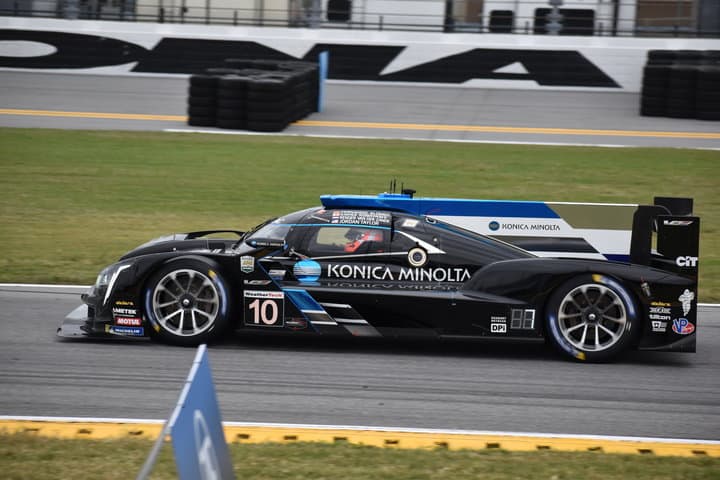 During the 15th hour of the Rolex 24 at Daytona, the rain began to fall at Daytona International Speedway.  Instantaneously, the race changed.  What was a relatively attrition-free affair turned into a punishing wreckfest.

Wayne Taylor Racing’s Fernando Alonso slipped past Action Express Racing’s Felipe Nasr with just over two hours to go when Nasr went wide entering Turn 1.  From there, Alonso pulled out a gap over the pack.  When DragonSpeed’s Sebastian Saavedra crashed the No. 18 ORECA 07 to bring out the race’s 17th caution, the race was placed under the second red flag of the event.  With only 10 minutes remaining on the clock, IMSA declared the race official.  As a result, Wayne Taylor Racing takes their third Rolex 24 at Daytona overall victory with the driver lineup of Alonso, Kamui Kobayashi, Jordan Taylor and Renger van der Zande.

“Just an amazing experience with the team from the test…to the race,” Alonso said after the race.  “A perfect execution of the race.  Very different conditions for all the competitors from in the dry [and] wet, so I think we all kind of deserve this one.”

Heading into the race, Mazda Team Joest had been the dominant team for much of the weekend.  That wasn’t the case during the race despite the fact that Oliver Jarvis led early.  Much of the early-to-mid stages of the race were dominated by the two Acura ARX-05s.  Juan Pablo Montoya was able to get past Jarvis for the lead and swapped it back and forth with the No. 7 for a time.

The Mazda charge effectively ended in the seventh hour.  Both cars developed fuel leaks.  The No. 55 with Olivier Pla at the wheel was first.  In his case, it led to the car stalling and drawing a caution.  After repairs in the garage, he continued laps down.  10 minutes later, the No. 77 with Timo Bernhard driving had a similar issue, but it sparked a fire that resulted in the pole sitting car dropping out on the spot.  The No. 55 eventually got back on the lead lap before the fuel issue returned.  The power cut resulted in a crash that put the No. 55 out.

Action Express Racing’s No. 31 for Nasr, Eric Curran and Pipo Derani ended up second.  Acura Team Penske’s No. 7 Acura ARX-05 for Hélio Castroneves, Alexander Rossi and Ricky Taylor was third.  CORE autosport’s No. 54 Nissan DPi for Jon Bennett, Colin Braun, Romain Dumas and Loïc Duval was four laps down in fourth after a late crash for Dumas.  JDC-Miller MotorSports’ No. 85 Cadillac for Rubens Barrichello, Devlin DeFrancesco, Misha Goikhberg and Tristan Vautier was seven laps down in fifth despite a late spin at the Kink for DeFrancesco.

In LMP2, DragonSpeed dominated much of the race, but their full-time brethren were not too far off of the pace early on.  The PR1 Mathiasen Motorsports No. 52 led laps in the opening hours and was still running well until Mark Kvamme spun exiting Turn 1.  Kvamme was then hit by JDC-Miller MotorSports’ No. 84 Cadillac driven by Juan Piedrahita in the right rear.  The team spent more than two hours making repairs before rejoining 70 laps down.

From that point on, it was more or less a DragonSpeed duel.  Every time one of the DragonSpeed ORECAs faltered, the other would pick up the slack.  Despite multiple incidents, the No. 18 was in position to win the class when Saavedra crashed.  The No. 81 faltered around the same time.  As a result, the No. 18 was able to hold on to take the win with the lineup of Saavedra, Ryan Cullen, Roberto González and Pastor Maldonado.

With the No. 81 team retiring late in the going, Performance Tech Motorsports’ No. 38 for Cameron Cassels, Kyle Masson, Dr. Robert Masson and Kris Wright finished second, four laps down.  The No. 81 of James Allen, Ben Hanley, Henrik Hedman and Nicolas Lapierre was classified third, 15 laps back.

GT Le Mans saw Porsche continue their strong form early on.  However, like in the other class, dominant cars in practice and qualifying did not dominate in the race.  Ultimately, Risi Competizione’s Ferrari and Corvette Racing’s No. 3 came to the forefront.

Both of the Corvettes ultimately ran into problems.  Jan Magnussen hit his own teammate in the pits and damaged the front end of the No. 3.  In the early morning hours, Tommy Milner hydroplaned entering Turn 1 and slid into the barriers.  The 30-minute stay in the garage for repairs ended any chance for victory, despite that entire time being spent under yellow.

Ford Chip Ganassi Racing’s No. 67 recovered from an early visit to the garage to take the class lead late, but they were tight on fuel.  When Saavedra crashed, the No. 67 driven by Richard Westbrook at the time was nearly out of fuel.  As a result, he had to make a stop for emergency service.  It’s legal, but you have to do a drive-through afterwards.  Westbrook came in, took the emergency service and kept the lead.  The red flag that ended the race came before he could do the drive-through.  As a result, the drive-through became a one-lap penalty.

That gave the class victory to BMW Team RLL’s No. 25 for Connor De Phillippi, Philipp Eng, Augusto Farfus and Colton Herta.  The team didn’t make a lot of noise during the race, but they were seemingly the only team in the class to not be penalized during the race.

The Ferrari of James Calado, Miguel Molina, Alessandro Pier Guidi and Davide Rigon were second, followed by Porsche North America’s No. 912 for Earl Bamber, Mathieu Jaminet and Laurens Vanthoor, one lap down.  The No. 67 Ford of Westbrook, Ryan Briscoe and Scott Dixon ended up fourth due to the penalty, while the No. 911 Porsche of Frédéric Makowiecki, Patrick Pilet and Nick Tandy were fifth.

GT Daytona saw Marcos Gomes lead the race for Via Italia Racing from the pole with Ben Keating in the Riley Motorsports Mercedes close in tow.  Once Gomes got out of the car, Via Italia Racing immediately fell out of contention, leaving Keating to fight it out with Meyer Shank Racing with Curb-Agajanian’s Trent Hindman.  Montaplast by Land-Motorsport and AVS Vasser Sullivan’s No. 12 Lexus were also in the hunt.

After the rains came, things became problematic.  The restart after the red flag saw a huge wreck break out on the frontstretch.  EBIMOTORS’ Taylor Proto and Paul Miller Racing’s Ryan Hardwick both spun out.  PFAFF Motorsports’ Zacharie Robichon came upon the scene far too quickly and plowed into the back of Proto.  The wreck ended the race for all three teams.

The conditions wreaked havoc on the leaders late.  Montaplast by Land-Motorsport’s Daniel Morad was leading the class about 15 minutes before the race-ending red flag when he spun in Turn 1 all by himself.  That gave the lead to Riley Motorsports’ Luca Stolz.  Two laps later, Stolz spun exiting the infield all by himself.

That spin gave the lead to GRT Grasser Racing Team’s Christian Engelhart.  Engelhart and his teammates Mirko Bortolotti, Rik Bruekers and Rolf Ineichen had to battle back from an improper wavearound penalty that put themselves two laps down.  Engelhart was able to hold on to not only take the class victory, but defend the victory from last year as well.

The IMSA WeatherTech SportsCar Championship returns to action at Sebring International Raceway on Mar. 16 for the Mobil 1 12 Hours of Sebring.  Coverage is scheduled to begin on CNBC, but will jump around during the day.