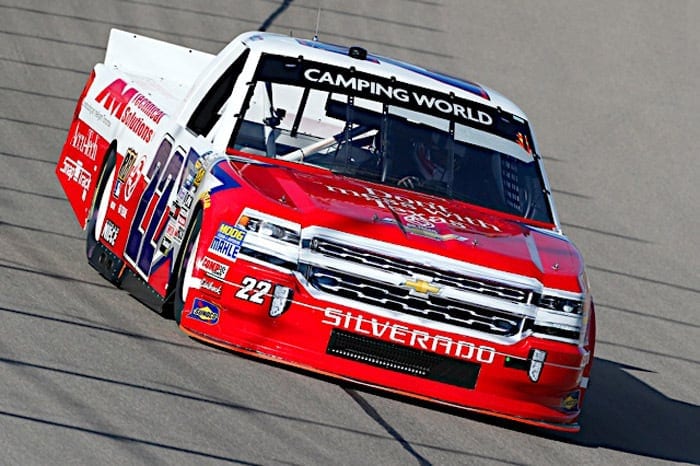 AM Racing has announced its return to NASCAR competition, fielding 22-year-old Austin Wayne Self in its 2019 NASCAR Gander Outdoors Truck Series campaign.

The team’s 2019 debut will come in the season opener at Daytona International Speedway.

AM allied itself with Niece Motorsports in 2018, a move that saw Self move to Niece for the year. Now, the organization will collaborate with Win-Tron Racing, managed by Kevin Cywinski, and has moved its headquarters to Mooresville, N.C.

“We are very optimistic about the upcoming season,” AM Racing team principal Tim Self said in a team release. “We feel very confident in the direction of the race team and look forward to producing results on the track that will justify our restructuring and give our marketing partners the exposure and satisfaction they are looking for.”

The team’s moving parts were plentiful in the offseason, as AM Racing purchased several trucks from and formed an alliance with GMS Racing. Additionally, AM brought on a number of new personnel, including crew chief Eddie Troconis.

Troconis, a veteran crew chief in the truck series, has guided Cameron Hayley and Ben Rhodes at ThorSport Racing in the past three seasons, winning two races with Rhodes in 2017 and 2018.

“I’m super excited in my new position at AM Racing and to be able to lead the team for the 2019 season,” Troconis added. “Kevin (Cywinski) and I have put together a great team with a combination of skills, knowledge and experience. Everyone at the shop has a great attitude with good chemistry and that’s important.”

“I can’t wait to work with Eddie and the guys on our AM Racing team,” Austin Wayne Self said. “I feel like with my experience and the leadership that Eddie brings to the table, we should find ourselves near the front a lot more in 2019.”

Self has made 63 NGOTS starts over three years, securing a career-best finish of second at Daytona in 2017. Self also has four top-10 results to his name, with at least one in each of those seasons.