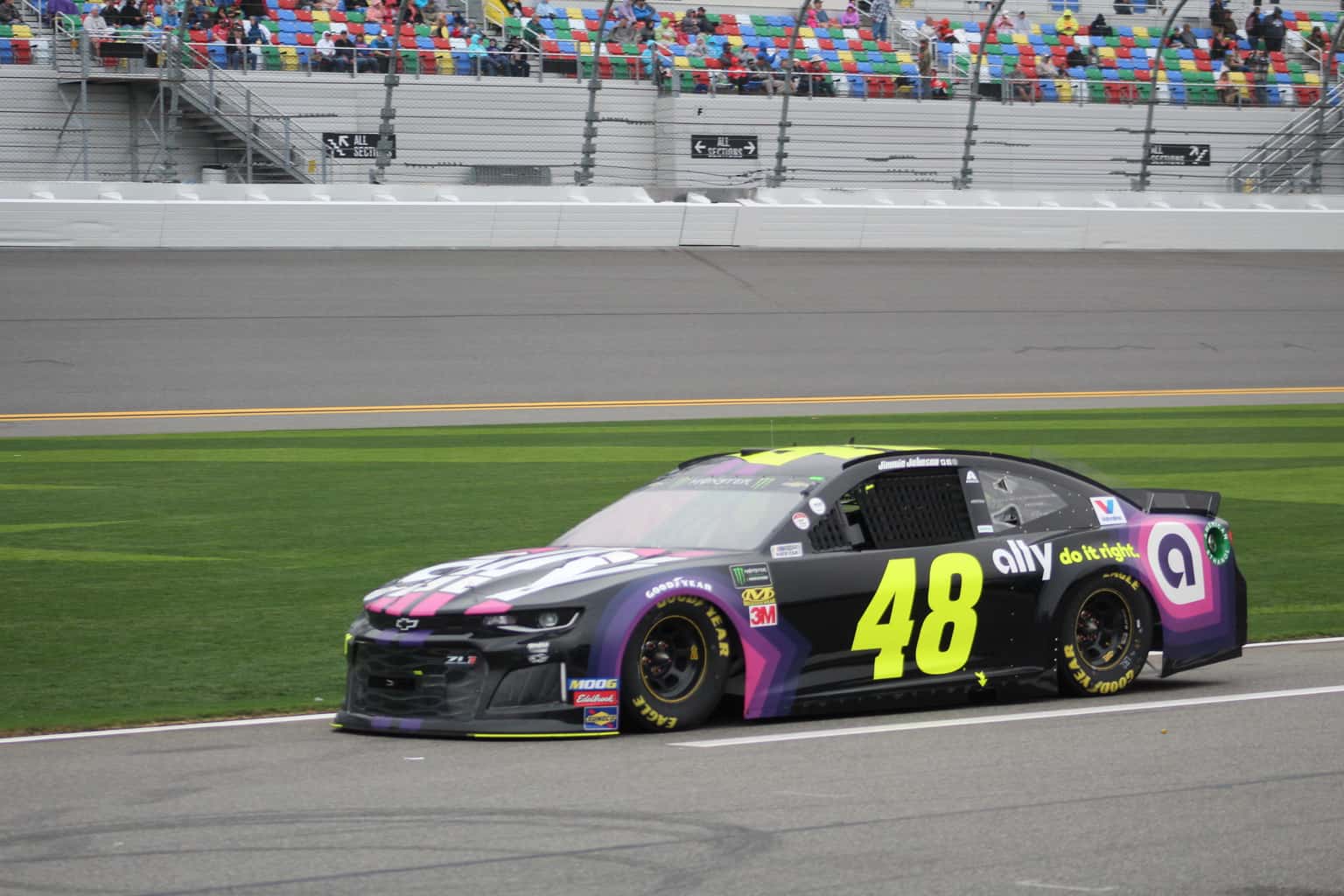 Jimmie Johnson knew the rain was coming. He dove down alongside Paul Menard in an attempt to pass him and grab the lead in Sunday’s (Feb. 10) Advance Auto Parts Clash. Unfortunately, the two drivers made contact, triggering a wreck that collected over half the field. As NASCAR sent out its safety personnel and crews to clean up the crash, Mother Nature finally had enough. The rains came down harder, and with the storm expected to last much longer, NASCAR made the call.

Johnson had won the sport’s first race of the year, a non-points exhibition that got him back to Victory Lane for the first time since Dover in May 2017.

Not a bad way to start 2019 ?? pic.twitter.com/XVjBskSNXS

Johnson’s victory came at the expense of pole sitter Paul Menard. Despite a race with several stops and starts, all for rain, Menard stayed out front most of the afternoon. He led nearly all the laps, putting himself in strong position to win until that final accident. Johnson, sensing the raindrops were coming, made an aggressive move to side-draft in a last-ditch opportunity to take the lead. That left Menard’s car a mangled mess and the driver lamenting a missed opportunity at the hands of someone he said “causes at least one wreck every plate track.”

I informed Paul Menard that Jimmie Johnson was declared the winner. What he said: ⁦@NASCARONFOX⁩ pic.twitter.com/OcAEhMMLEn

“He got us in July last year,” Menard added. “It’s unfortunate he did it again.”

The FOX broadcast teams wondered if this race would be an indicator of what to expect in the Daytona 500. If it is, Menard will have a fast car. In Daytona 500 qualifying earlier today, Menard posted the 11th fastest time. He will start sixth in the second Gander RV Duel on Thursday, Feb. 14.

Outside of the weather, the other prominent storyline in the Advance Auto Parts Clash was the strength of the high lane. For virtually the entire race, most drivers stayed on the outside, snaking around in a single-file line. When drivers, such as Daniel Suarez, tried to charge to the front on the bottom, the cars stalled out. Those drivers either wound up moving into the high lane or slid all the way to the back.

On the final restart, Menard elected to stay high. Although his teammate Brad Keselowski was in the second row, Keselowski remained on the bottom in third place. Menard wanted the high lane, and he received a good push from Johnson.

As the laps wound down, Menard, Johnson, and Kurt Busch were the top three drivers in line. Nobody used the bottom lane to challenge them. One storyline for the Daytona 500 will be whether the high lane will remain the preferred lane of choice. Even when Johnson passed Menard, he didn’t reach the bottom. Instead, he drove his No. 48 Chevrolet to the right rear quarter-panel of Menard’s No. 21 Ford and started to pass him through a side-draft. Menard tried to block, but by that time, it was too late. Menard got loose, eventually spun, and Johnson emerged as the winner of the Clash.

Even though Chase Elliott’s car chief was ejected from Daytona International Speedway due to the No. 9 Chevrolet failed pre-qualifying inspection twice, Johnson’s victory gives Hendrick Motorsports plenty of confidence heading into the duels and the Daytona 500.

Just 59 of the 75 scheduled laps were completed.

Well, we see how Jimmie will crash someone to get to the front and then blame it on the guy he wrecked

Kyle hasn’t caused nearly as many wrecks as Johnson & Keselowski have.

Really hard to see on the replay that Menard came down to block. Looks more like Johnson just tried to make a last ditch effort to win and it didn’t work out. Well it worked out for him but turned bad for Menard and pretty much the rest of the field except for 3 or 4 other cars. I remember years ago at Talladega when Johnson darn near dumped his mentor and teammate Gordon going into turn 3 by making a move he couldn’t do cleanly. Gordon wasn’t too happy with 7 time and said so afterward. Johnson may appear to be Mr. Niceguy but I think he’s a wolf in sheep’s clothing. Johnson’s desperate for #8. So now it’s only going to get worse.

Dan, I agree with you 100% I think desperation is the monkey on Johnson’s back.