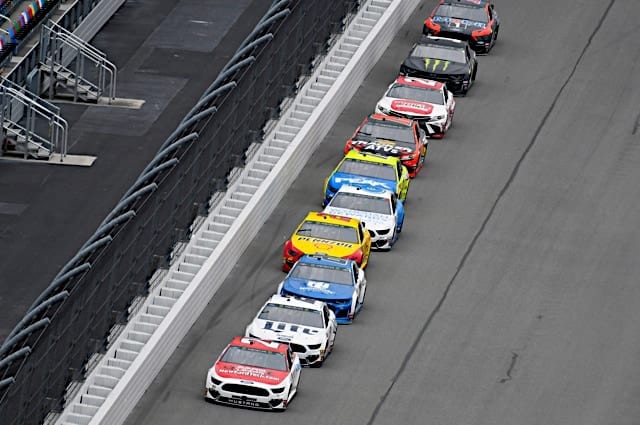 This one may seem a bit obvious, but before we storm the NASCAR Bastille, take a minute to consider what was at stake on Sunday (Feb. 10). Yes, the Clash may have been a bit anticlimactic, but it is an exhibition race after all. It doesn’t make or break a driver’s career. Greatness isn’t quantified by how many Clash trophies a driver has on their mantle.

It was a parade at times, with literally the entire field running nose-to-tail around the top side of the track. But why do anything else? There is literally no incentive for drivers to run side-by-side throughout the race. There are no stages to win, no points awarded and no guaranteed play spots on the line. It may have been a lackluster show, but don’t throw in the towel on the 500 just yet.

Hendrick Motorsports has always been strong at Daytona, but sweeping the front row yet again is quite a feat at a track where everyone has a randomly selected restrictor plate bolted to their motor. This year, it wasn’t just the front row, either. The top four qualifiers were the Hendrick quartet. Fortunately for the rest of the field, HMS isn’t permitted to enter more than four cars. Either way, Hendrick Chevy’s have now won the Daytona 500 pole for five straight years.

That said, success on pole qualifying day hasn’t resulted in much success in the 500 of late. No driver has won the Daytona 500 from the pole since Dale Jarrett did so in 2000. None of the previous three HMS drivers (Chase Elliott won the pole twice) could even manage a top 10 finish. Defending 500 champion Austin Dillon was the last driver to turn a pole start into a top 10 finish back in 2014.

For Jimmie Johnson, 2019 couldn’t have started much better. He put up the third quickest time in qualifying, then backed it up by returning to Cup Series Victory Lane for the first time in 20 months. Yes, I know it’s an exhibition race, but for someone coming off a winless season, it totally counts. Especially when he had never won less than twice since he began racing in Cup until that abysmal 2018 campaign.

Yes, it all went perfect. Except for that little tap he had with Paul Menard as the two battled for the lead. Menard ended up backwards, in the grass, on the track, everywhere, really, striking almost every other car in the event during Sunday’s “big one.” While it may be fun to vilify the former champ, let’s not forget that there isn’t a driver in the field who hasn’t caused a wreck at some point, particularly at restrictor plate tracks, where just sneezing in the general direction of another car is enough to turn it sideways.

Four: Are You Coming or Not?

Typically, race teams need every ounce of publicity that they can get. Announcements are made with great fanfare, complete with banners, matching shirts, and the whisking away of blacked out car covers. Obaika Racing did all of that less than a week ago at the NASCAR Hall of Fame, only to put out a statement two days later that they were not going to be able to make it to Daytona for Speedweeks. Add to that the fact that the statement was released literally 30 minutes before the deadline for haulers to arrive at the track, one has to wonder just how long team leaders had known they wouldn’t be attending.

Last year, ARCA was purchased by NASCAR in a deal that brought the midwest racing series under the NASCAR umbrella. Then this past weekend, it was announced that General Tire will be the official supplier for not only ARCA, but both NASCAR K&N Series’ and the NASCAR Pinty’s Series. One must wonder what all this means for Goodyear, who has been the exclusive provider of tires to NASCAR’s top three touring series for over 20 years. Could this be an audition of sorts for General Tire? While no one wants to see a tire war like the sport endured in the late 80’s, the sport might benefit from a little healthy competition.

The 500 will look just like the dash. Single file outside line, period. It’s obvious, this car and setup will not allow that inside lane to keep up at Daytona, no matter how many cars are in it. Joey tried it with some success but couldn’t make it happen. This is going to be a very boring race and DW is going to have a hard time spinning it differently. Lots of NASCAR hype but again failure to deliver a decent product. Let’s see who is right, you or me.

I called that for sure

i’m sorry but i think the 500 will look like the clash, only a longer line of single file cars. if this occurs just another nail in na$car’s lid. now they will line up and race at the end of each segment and cause a wreck, so by the end of the race there won’t be 40 cars on the track.

In the 500 Johnson will be in front blocking or behind Elliott blocking and get hit and cause a demo derby type wreck again.

“It was a parade at times, with literally the entire field running nose-to-tail around the top side of the track. But why do anything else?”

wrong….these are racers at heart….if the cars were capable of good racing, you would have seen it Sunday afternoon….

Welllll,,, the doodle bugging was fun back then. Personally I thought that was a good display of extremely good driving, especially when Brad #2 figured out how not to be a sitting duck and left Kyle wondering WHAZZUP?