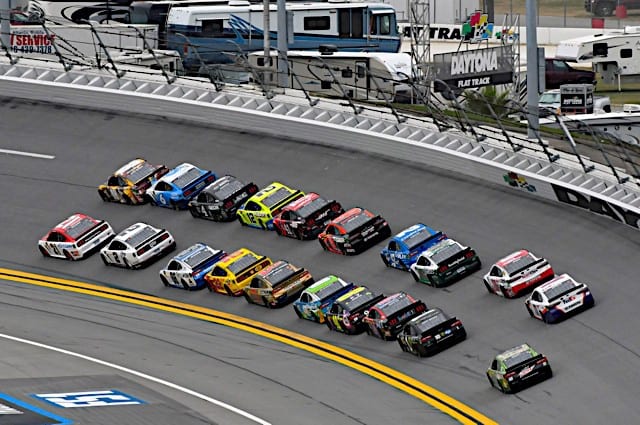 With Daytona 500 qualifying out of the way, the 2019 Monster Energy NASCAR Cup Series season has officially gotten underway.

Jimmie Johnson claimed the victory in the Advance Auto Parts Clash, after passing Paul Menard on lap 55 of what ultimately became a 59-lap rain-shortened event.

The good news for the No. 48 team was that it won its first race with new crew chief Kevin Mendeering and new (sort of) sponsor Ally Financial. The bad news is, I think this is the eighth-straight year that Johnson was involved in an incident during the Clash. When he passed Menard, he started a crash that involved 17 cars.

Johnson has seven championships, 83 Cup wins and a very large bank account, more than enough to support his family. At 43, he’s also one of the oldest drivers in the Cup garage, and it could be that his reflexes aren’t as quick as they once were. His teammates Chase Elliott and William Byron, along with drivers like Ryan Blaney and Daniel Suarez, are the new generation starting to leave their imprint on the sport.

At the debut ROVAL event in Charlotte last fall, Johnson’s last-corner dumping of fellow veteran Martin Truex Jr. handed Blaney the win; it was one of the only times he was in the mix for the win all year. Granted, Hendrick Motorsports had a dismal year by their standards in 2018, but Sunday’s incident makes you wonder: is his only chance to win now reliant on demolishing any cars between him and the checkered flag?

Ford is coming off a manufacturer championship in a season where they captured over half the season’s events (19 of 36 points-paying, 21 of 38 overall) in the final year of the Fusion. Now, the Blue Oval teams are using the Mustang, one of the most iconic vehicles produced by the Ford Motor Company. Will they continue their dominance?

Last season, Chevrolet saw the debut of the Camaro ZL1 and Austin Dillon win the Daytona 500 (on a last-lap punt), and…that was it as far as highlights went, until Chase Elliott won his first MENCS race at Watkins Glen International in the beginning of August. Elliott claimed two more victories before the season ended, but they were both more capitalizing on Kevin Harvick‘s mistakes, rather than driving away from the field.

Stewart-Haas Racing tallied 12 victories in the Cup Series and three Xfinity victories last season. They return Harvick, Aric Almirola and Clint Bowyer to their Cup roster, adding in Suarez to the No. 41 in search of a fresh start. They’re a team well-suited to that role. In the Xfinity Series, Cole Custer and Chase Briscoe both return for the full schedule.

Roush Fenway Racing is hoping 2019 goes smoother than 2018. Veteran Ryan Newman takes over the No. 6 from Trevor Bayne and Matt Kenseth, while Ricky Stenhouse Jr. is hoping to be more than a restrictor-plate specialist. RFR shut down its entire Xfinity program after losing the No. 16 team’s main sponsor and two of the three drivers who shared the No. 60 got full-time rides elsewhere.

The 2019 Rookie of the Year battle shows that hard work and on-track talent can still earn you a ride in the premiere series. The 28-year-old Daniel Hemric (Richard Childress Racing No. 8) worked his way up through the Truck Series with steady performances for Brad Keselowski Racing into the Xfinity ranks with RCR’s No. 21, where he was a quiet title threat for both of his seasons there. He has two career MENCS starts, both for RCR last season.

The 28-year-old Ryan Preece toiled for the perennial underdog JD Motorsports for a while before gambling on a two-race audition with Gibbs in 2017, which paid off well enough to earn a partial NXS schedule in 2018, where he got a win, seven top-fives and 10 top-10s in 15 starts. That was good enough for JTG Daugherty Racing to sign him for their No. 47. Preece has five MENCS starts, all in 2015 for Premium Motorsports.

For the second year in a row, the ROTY race will be conducted pretty deep into the pack most weeks. RCR is solidly in the second or third tier of teams rankings right now as an organization, and JTG is still firmly in the underdog class, though near the top.

Matt Tifft moves up to Cup in the No. 36 thanks to Front Row Motorsports’ expansion to three cars. He was solid, though not spectacular, in the Xfinity Series while driving for Gibbs and Childress, beating a brain tumor along the way. FRM could move up to the mid-pack class this season if things go right.

The fourth ROTY entrant, Tanner Berryhill, won’t even be competing this week as Obaika Racing never showed up to Daytona despite previous announcements they would compete the full schedule with the No. 97 Toyota.

Truex joined Joe Gibbs Racing and became the third driver in the history of their No. 19, replacing Suarez. He brings Bass Pro Shops and Auto-Owners Insurance to the team as primary sponsors for most of the races, and this Bass Pro scheme looks fantastic, with the black dominant and the bright orange trim. Black and orange nearly always make a good color scheme for a car or a uniform, and I’m inclined to think well of Bass Pro, as a friend of mine works for them.

Kyle Busch seemed to be planning a little Mario Kart action for Monday night, releasing a video of himself on a go-kart along with Mario, Donkey Kong and Yoshi.

Dale Earnhardt Jr. approved of this plan, as did Corey LaJoie and racing journalist Jeff Gluck.

Corey Lajoie !!! Who cares what he thinks. He’s living on his dad’s achievements ONLY.
Trucks, xfinity, cup = zero wins. Pick a real racer to quote, not daddy’s boy.

Wesley clearly has his favorites, week in and out. The omissions of certain names each week with obvious good runs or bad is hilarious. It renders his column to the funny pages. I laugh each week. Where did they dig this person up from? Lol.