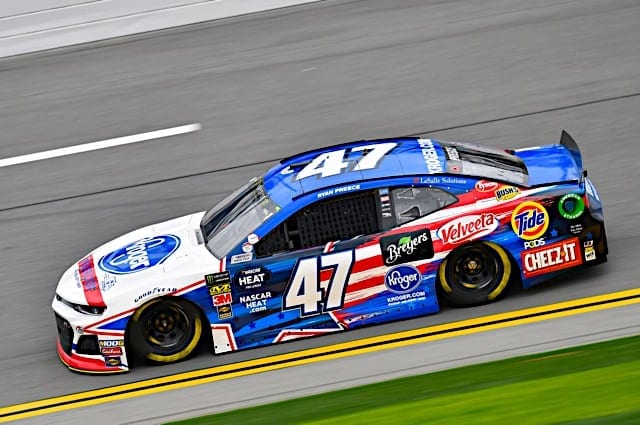 For years, JTG Daugherty Racing’s moniker has been that it’s an underdog team. Not any more.

Chris Buescher returns to JTG for his third year with the organization, coming off a season that saw a slight increase in average finishing position from his first year in the No. 37 ride. The team also added Ryan Preece to its stable, replacing veteran driver AJ Allmendinger.

In 2018, the No. 37 and 47 teams finished 22nd and 24th, respectively, in the championship standings. However, the duo believes the future is bright at JTG, which is celebrating its 25th anniversary.

“Just because we haven’t had that repetition yet of not contending for wins, doesn’t mean we can’t get there,” Preece said on Wednesday (Feb. 13) at Daytona 500 media day.” That’s something I’ve learned in all of my racing. You find a setup and fine tune on it. That’s what its going to come down to and one thing that I feel like I can bring to this team.

“I’m not setting up the racecars, but I can tell you what corner we need to work on to make gains, where when we unload for practice, we constantly make that car better and not making it worse.”

Preece has five Monster Energy NASCAR Cup Series starts to his name, all of which came in 2015 for Premium Motorsports. But after betting on himself the past two seasons in the Xfinity Series and picking up a pair of victories with Joe Gibbs Racing, the Connecticut native believes he can have a breakout season with the new aerodynamic package, even while racing for a smaller team.

“I just feel like if we work together and keep building on this package and building a setup, building a notebook and keep making gains, even throughout the season we can be a contender.”

Buescher, on the other hand, has picked up six top-10 finishes in 72 races with JTG. In 2018, his lone top 10s were a pair of fifth-place finishes at Daytona International Speedway.

But there’s always room for improvement.

“I would say we didn’t get the results we hoped for,” Buescher said of his first two years with the team. “You always want to be winning races, and that’s our goal for this season, but we want to be better than we were last year. Last year, we were able to finish in the top 20 consistently.

“I think we’re working toward running in the top 15 to start the season off and then get to the point where we can get top 10s consistently.”

Both the Nos. 37 and 47 are fully sponsored for the 2019 season, with Kroger backing a new sponsorship strategy. And while JTG has been labeled as an underdog for many seasons, Buscher doesn’t believe that’s the case any longer.

“I would say an underdog team would be a small team, and I don’t really think we’re a small team,” Buescher said. “We’re not a super team. We don’t have four racecars with three different alliances, but we are a smaller team that’s making headway in this sport.

“To say underdog is probably not quite accurate, but we’re a small team that’s going to make waves. I think there is  a lot of gratification in that itself, and even more so once we start getting the results that we think we’re capable of.”

The team has a newly-formed alliance with Hendrick Motorsports this season, similar to the one Leavine Family Racing has with Joe Gibbs Racing.