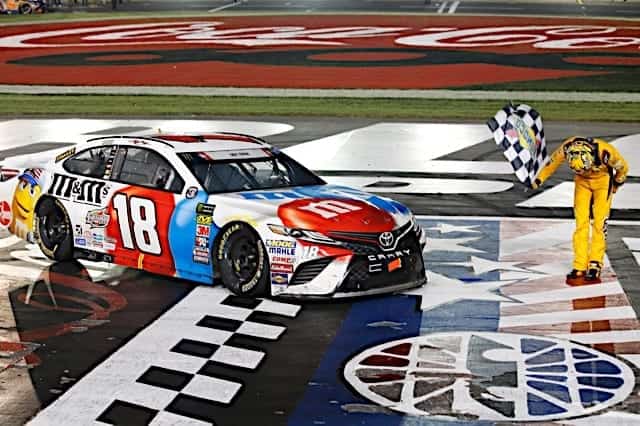 Did You Notice? … NASCAR enters 2019 with a slew of major changes? Among them: a new handling package designed to bring the cars closer together, the end of restrictor plates, disqualifying race winners that fail inspection. But, most importantly, there’s a new CEO (Jim France) and new President (Steve Phelps) compared to this time a year ago.

Those people acknowledge major changes are needed in order for the sport to be successful. Phelps, in a widely-publicized article this week, admitted the sport “probably lost our way” over the past decade-plus. The new handling package, designed to lower speeds and increase competition, was tested at the sport’s All-Star Race last May with mostly positive reviews.

That’s likely the tip of the iceberg. A merger between ISC and NASCAR is fueling rumors about a major investor or complete sale of the sport. If it stays in France hands, a schedule overhaul in 2020 is virtually assured. Tracks like the Nashville Fairgrounds, Gateway Motorsports Park and Road America could pop up in Cup with race dates in the middle of the week.

Clearly, NASCAR had to try a different approach. In the fifth year of its 10-year TV deal, ratings have declined at a frenetic pace. From the sport’s high in 2005-06, the audience for some races has been cut in half. The Daytona 500, which scored an 11.3 rating for NBC in 2006, had just a 5.3 last year, a decline of 53 percent. Seating has been reduced by tens of thousands in the past decade at virtually every track on the circuit.

Problem is, we’re less than one week into the new season and people are already ready to jump off the deep end. Kyle Busch was highly critical of the new handling package after Las Vegas testing. He, along with others, claims it takes too much driver skill out of the equation.

Then, an underwhelming Advance Auto Parts Clash left NASCAR with egg on its face. Rain ultimately shortened the event from 75 to 59 laps. The race was run in mostly single-file conditions; it was more a procession than a prizefight. Then, just as aggression set in, a side-draft gone wrong by Jimmie Johnson triggered a 17-car wreck. Only three of the 20 cars ended without damage and a crash some thought was Johnson’s fault resulted in him winning the race. Pole sitter Paul Menard, who ran one of his best races in a journeyman career, was despondent. Fans were also raving mad.

But hold on a minute. The ratings for this race… increased a few hundredths of a ratings point? That’s right. While Daytona qualifying had a slight decrease, the Clash held serve despite the worst possible outcome. (Red flags, horrible wreck, controversy surrounding the winner). A disastrous exhibition didn’t run off the several million fans this sport has left.

Yes, both events still fell short of the 2.1 Nielsen rating posted by the new Alliance of American Football that premiered on CBS. (That’s right; NASCAR got outrated by minor league football.) There are plenty of problems. Having just 38 cars attempt the NASCAR Xfinity Series opener for a smaller, 38-car field foreshadows car count issues. The sport’s charters are still dirt cheap on value compared to major league franchises. There’s no guarantee the new handling package will work and efforts to replace sponsorship have been mixed.

But can people just give this sport a couple of weeks? For years, fans have clamored for people to do something to stem the hemorrhaging of fan interest, sponsorship and close competition. Well, for once, NASCAR finally listened. But everyone is so used to criticizing every move they make, at every turn, it’s almost impossible to stop.

My hope is we can take the first month and do something harder than ever to do in modern society these days. Let. It. Breathe. NASCAR has gone ahead and tried to make the product better.

Let’s take a step back and not make a rash judgment on one exhibition race or one test. It needs to be given a chance to work.

Did You Notice? … Two of the three slowest drivers in Daytona 500 qualifying, Cody Ware and BJ McLeod, are locked into the Daytona 500 field? Their team, Rick Ware Racing, owns two charters that earn them an automatic spot on the grid each week. Even though both men have never made a Daytona start in Cup, they’ll earn the right to run the sport’s biggest race just by strapping in.

Along those same lines, Spire Motorsports has never run a NASCAR race. But its new charter, which it purchased for a reported $6 million from now-defunct Furniture Row Racing, earns them a spot. No matter how 2010 Daytona 500 winner Jamie McMurray does in Thursday’s Duels, money equals an automatic bid.

Therein lies one of the problems NASCAR has had for the last 15 years. Anyone who pays the right price, not the right speed, can earn a spot in its Super Bowl. Could you imagine being able to play in the NFL Super Bowl against Tom Brady two weeks ago? In NASCAR, you can if you’ve got money, a small amount of experience and a team with an automatic spot.

There’s no shame in NASCAR’s charter system; I understand why it exists. The goal is to ensure these owners have equity in the sport over the long-term. In 35 of the 36 races, some type of guaranteed spot makes sense.

But the Daytona 500? Especially with its unique qualifying system and legacy? That needs to stand on its own. The best teams should be able to race their way in without a problem. They have two chances: raw speed or the qualifying Duels. Perhaps you leave some provisionals (NASCAR used to have seven a race) to ensure someone like defending champion Joey Logano doesn’t miss.

Nothing against Ware, McLeod or Spire. Any of the trio could wind up with a top-10 finish or better if the Daytona draft goes their way. But you shouldn’t be able to buy your way into your sport’s top athletic competition. You should have to earn it.

Nascar has stopped releasing driver’s purses, but I have the impression the winnings for non-charter drivers is much less than in the past, which translates to it doesn’t pay for non-charter teams to race, even at Daytona (which historically had the largest payouts in Nascar, even for the last place start-and-parkers).
Regardless, my understanding is Daytona (and, I also assume Talledega) has plenty of pit-road and garage space to easily accommodate more than 40 cup cars (especially since the cup field was recently 43 cars) . If non-charter teams are willing to run for low purses, and the race track can easily and safely accommodate additional teams, I see no good reason (other than greed by charter teams not wanting to share purse money) for Daytona (and possibly Talledega, and maybe some other large tracks) to limit the field to just 40 cars; expand the field to whatever number of cars can be accommodated on pit road and in the garage.
I do not advocate the non-charters getting a larger share of the purse money, I only advocate that the non-charters get a greater opportunity to race; the non-charters can decide if racing is monetarily feasible.

Let’s face it Tom, NASCAR’s track record on their changes making things better is pretty bad. They say racing will be better or more exciting every time they make a change. After a while it’s like the little boy that cried wolf. They tell you that this change is going to result in a positive outcome and it rarely does. So we all just shrug our shoulders now and say “yeah right, don’t piss on me and tell me it’s raining again, I ain’t buying it”.
So I expect the worst or, at best, no significant difference and hope for the best. The bottom line is that NASCAR has earned the skepticism they are getting from the fans.

Buying your way into a NASCAR race is nothing new. In fact it’s the norm. Been that way forever but has become very blatant in the last 10 years,

I expect both Johnson and Knauss to have some success, just nowhere near what they were used to. I think it will be easier for Knauss than Johnson. You can’t argue that a driver’s results decrease with age. I am sure a crew chief may as well, but not a Knauss’ age (yet).

i’m sure the new orleans saints would had loved to buy their way into the superbowl. why not….we could had shoe-horned a few hundred thousand more people into downtown atlanta! if i recall, in days of ole teams that didn’t qualify for the 500, if they had a sponsor, often time they’d go to the surprising team that made it into the big show as a result of duels, pay that owner/driver money and slap their sponsor decals and put their driver in the seat just to get sponsor in the race and the tv exposure, limited or not, for the sponsor.

the clash….well both retired gordon and earnhardt jr have come out publically and said the clash should be gone, so i’m sure na$car will do away with it since the grand poobahs say so.

you can’t base someone’s season on any race that involves plates, or restricting the horsepower. they always said season didn’t really start til the second race cause of the crap shoot of a plate race. who will win sunday……the one who survives the mayhem, and there will be as we’re back to stage racing, so there’s 3 chances of wrecking as they forget the black and white checkered flag is the only checkered flag that matters. i also have a feeling old mother nature will show her face sunday.

speaking of mother nature…..be interesting to see what happens at atlanta….already the weather people here are saying we’re in for 10 days of rain and lots of it. but i know it’s still early. we had 80 degrees last week, so we could have ice storm or snow race weekend, or it be a beautiful day at the track.

ratings from clash so/so…..look around and see what was on tv against it. not too much, so people might had put race on hoping for a change, but ended up like myself and getting a nap. it was also a cold raw day here in georgia last sunday and if i remember winter weather in a good part of the country, so people probably stayed indoors.

heaven help us if the 500 is a follow-the-leader race. no amount of food or alcohol will help make a turd of a race turn into a winner.

Tom, I’m sure we’re all tired of writing the same things for years, so I’m not alone in thinking the changes won’t work and will probably end up being worse. So I’ve got a new topic for you. Get one of your ace columnists to talk with Mark Martin and ask him about Jr. Hanley. And then talk to Bill Elliott. They’ll find the conversation interesting.