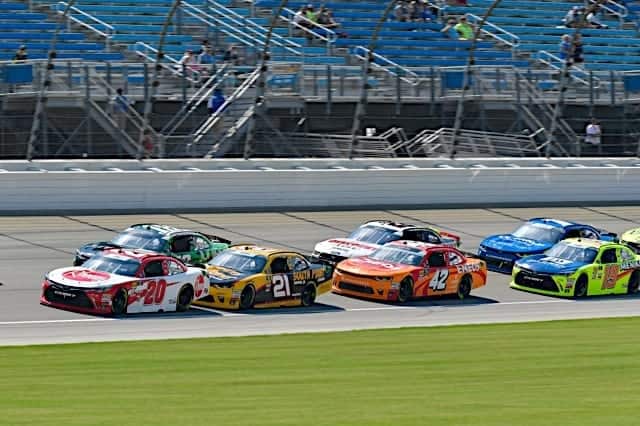 After a 13-week hiatus, the NASCAR Xfinity Series is set to take the high banks of Daytona International Speedway this Saturday (Feb. 16). Though it is the biggest race of the season, Daytona doesn’t give a fair prospective on how the season will turn out as a whole.

You could argue that wasn’t the case in 2018. Tyler Reddick won the season-opening race at Daytona and, though he didn’t win again during the regular season, a solid playoffs pointed him to Homestead-Miami Speedway where he went on to win the race and championship.

That’s right, Reddick book-ended the season to give JR Motorsports the title. That won’t be the case in 2019 — at least not the Reddick and JRM pairing, as the defending champion will drive the No. 2 car for Richard Childress Racing.

RCR isn’t set to run a second car, though there is a possibility of having one run a partial schedule. Just two years ago, the company ran five full-time teams.

Former RCR drivers Daniel Hemric and Matt Tifft will move to the Monster Energy NASCAR Cup Series, both of whom made the Xfinity playoffs last year. Joining that duo is Ryan Preece, who won at Bristol Motor Speedway last spring with Joe Gibbs Racing.

One of the bigger stories of the offseason was Chip Ganassi Racing announcing it would shut down the No. 42 Xfinity program for the 2019 season. Ross Chastain was scheduled to compete full time in the ride this season. The No. 42 car won seven races last season split between a trio of drivers.

To make it a little easier, let’s take it team-by-team.

For the first time in two seasons, there will be a ton of change at JRM. Noah Gragson will move up from the Gander Outdoors Truck Series to take over the No. 9 ride from Reddick.

Michael Annett will move from the No. 5 car to the No. 1 ride, as Elliott Sadler retired following Homestead. Meanwhile, JRM swapped numbers with B.J. McLeod Motorsports and will now have the No. 8 in-house. Filling out that ride will be Preece, Ryan Truex, Jeb Burton, Spencer Gallagher and Zane Smith. Plus, Dale Earnhardt Jr. will even drive the car at Throwback Weekend at Darlington Raceway.

The only diver-crew chief lineup that will remain the same at JRM from last season is Justin Allgaier and Jason Burdett in the No. 7 Chevrolet.

Cole Custer will return to the No. 00 ride, but the team will field a second full-time team for Chase Briscoe. In five races with SHR last season, Briscoe was victorious at the Charlotte Motor Speedway ROVAL.

As mentioned above, RCR is only slated to have one full-time car in 2019. Reddick joined the team because he believes there is a clearer path to the Cup Series at RCR. On Sunday (Feb. 10), he qualified for his first Daytona 500 for RCR.

Unlike most teams, there wasn’t much change over the offseason for JGR. Christopher Bell, a seven-time winner last season, will return to the No. 20 Toyota. His teammate Brandon Jones will drive the No. 19 car for a second straight season.

Meanwhile, there was some change for the No. 18 car. Sure, Kyle Busch, Denny Hamlin and Riley Herbst will compete in a few races each. But it is Jeffrey Earnhardt who is getting the best opportunity of his career by competing in nine races for the team.

The only change here is Austin Cindric will be competing in the full 33-race schedule in the No. 22 car. Look for the No. 12 car to appear in some races, likely split between Cup veterans Brad Keselowski, Joey Logano, Ryan Blaney and Paul Menard.

Chastain will return to JDM for 30 races, while also running the No. 10 for Kaulig Racing in a trio of events, including this weekend at Daytona. Scott Lagasse Jr. will pilot the No. 4 in the season opener.

Meanwhile, Garrett Smithley is returning full time to the No. 0 car. B.J. McLeod is also returning to the team, which could potentially turn into a full season should sponsorship come around. Stephen Leicht will be the driver of the No. 01 car and looking to run his first full NASCAR season since 2007.

Blake Koch announced in December he would run the No. 4 car in 2019, but less than two months later announced he would instead focus on his company FilterTime.

Justin Haley will move up from the Truck Series to run the team’s No. 11 car. In 2018, Haley won three races while finishing third in the championship standings.

As mentioned above, Chastain will run three races in the No. 10 ride: Daytona (Feb. 16), Chicagoland Speedway (June 30) and Texas Motor Speedway (Nov. 2).

After competing in 18 races last season for Chip Ganassi Racing, John Hunter Nemechek will be behind the wheel of the No. 23 ride. GMS picked up its first series win last season at Talladega Speedway, while Nemechek did the same in October at Kansas Speedway.

No changes here. Jeremy Clements will return to his family-owned No. 51 team for the ninth straight season. Last year, the South Carolina native had a pair of top 10s.

Ryan Sieg and Jeff Green will return to the team full time, and its hope of getting a driver with funding for the season was fulfilled when Josh Bilicki announced in early February he would be driving the No. 38 this season.

Josh Williams will be the team’s primary driver in the No. 36 car, replacing Alex Labbe, who doesn’t have any plans nailed down for the season. Caesar Bacarella is slated to drive the No. 90 at Daytona.

This team will look a lot different from 2018. In November, Gray Gaulding announced he would be the driver of the No. 08 car, formerly the No. 76 car. In January, Ray Black Jr. told Frontstretch he would be rejoining the team in the No. 07 car.

Kaz Grala is expected to run at least a partial schedule.

Sources have told Fronstretch that David Starr will return to the No. 52 car for at least Daytona and “likely beyond.” Last year, Starr had a best finish of 17th (twice).

Vinnie Miller will return to the No. 78 car after running the final six races with the team. Matt Mills joins the team in a full capacity, while Tommy Joe Martins, J.A. Avila Jr. and others are expected to run the team’s third car.

The team will compete in its first full Xfinity season in 2019. Brandon Brown will be the primary driver and serve as a team executive, putting his marketing degree to use.

In 2018, Brown competed in seven races with three top-20 efforts.

Joey Gase and the No. 35 will hop over to MBM after running the 2018 season with SS-Greenlight Racing. Chad Finchum is scheduled to run the No. 40 car in most races, though is missing Daytona. The team will likely run a third car in select races with Timmy Hill and Carl Long.

The status of JPM is unknown, though team officials say they will be back and have been working hard over the offseason to revamp the team after a tiresome rookie season.

Harmon told Fronstretch in January he expects to be back, but with the fields being cut back to 38 cars, it may be a difficult season for the No. 74 bunch.