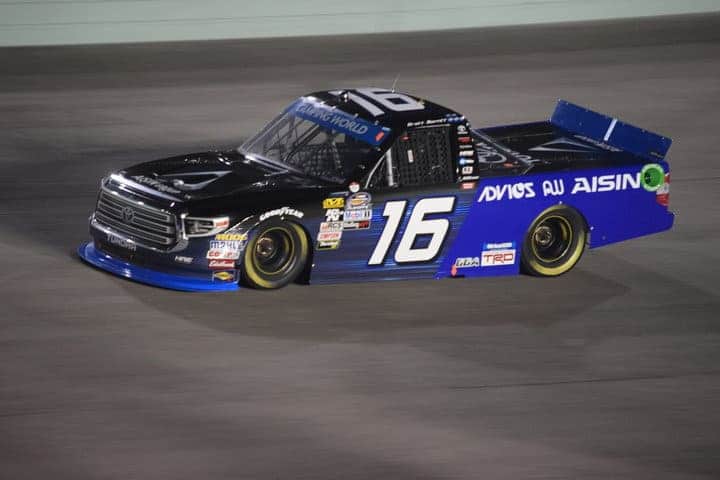 In just a few short days, the 2019 NASCAR Gander Outdoors Truck Series will make its debut as a newly re-branded series.

Can’t wait to have you at track in Daytona for your first entitlement race.#ReadySetGO pic.twitter.com/grVIfxatuX

NASCAR answered quite a few fan demands earlier this month when it announced new post-race inspection procedures. After the checkered flag flies, the sanctioning body will thoroughly inspect the first- and second-place finishers at the track, along with a random pick. Any driver found with an L1 or L2 violation of the rules will be dropped to last place, while the rest of the field will be moved up one position.

In addition to having the win stripped — something NASCAR had avoided in its history — all playoff points, stage points and the potential playoff berth associated with a victory in a car found in violation of the rulebook will be stripped as well.

“I think for us, we’re really looking at a total culture change,” NASCAR Chief Racing Development Officer Steve O’Donnell said of the new rule. “We’ve been through a deterrence model where we’ve really worked with the race teams at the track and probably been more lenient than we should in terms of the number of times teams can go through inspection and pass, fail, and there’s almost incentive to try to get something by NASCAR, so we want to really reverse that trend.”

Perhaps one of the more exciting changes this season includes a program that mimics the NASCAR Xfinity Series’ Dash 4 Cash.

Dubbed the Triple Truck Challenge, drivers will have a three-race shot to win an additional $500,000 beginning with the series’ second visit to Texas Motor Speedway on June 7. Extending through a trip to Iowa Speedway on June 15 and then Gateway Motorsports Park on June 22, any single-race winner will take home an additional $50,000. If a driver wins two of the three events, they will earn $150,000. And if they happen to win all three? $500,000.

Just like the Dash 4 Cash program, only drivers declared for points in the Truck Series will be allowed to enter those three events, allowing them to take center stage. But where the Triple Truck Challenge differs is that drivers don’t need to qualify to be eligible to win the bonus. As long as they’re in the race, they have a shot at the cash prize.

“It’s neat in the sense that it’s a little bit different,” NASCAR Managing Director of Racing Operations and International Development Ben Kennedy said. “It’s solely focused on the Truck Series drivers. [Series sponsor Gander Outdoors was] very involved in the process; they’ve really been involved a lot (transitioning) from Camping World to the Gander Outdoors brand. They’re really excited about the Truck Series and what we’re going to bring to the table this year.

“Putting half a million dollars on the line is certainly a big number for any team, let alone a Truck Series team,” Kennedy continued. “I think any time you can shake it up, especially in the summer and especially at stand-alone tracks, it’s big.”

Triple Truck Challenge to give drivers shot at $500,000 bonus.

This weekend, Hattori Racing Enterprises starts its quest to defend the 2018 championship scored by Brett Moffitt — except the defending champion won’t be the driver for that effort.

Just days before celebrating the organization’s first title, Moffitt told Autoweek that he would not return to HRE in 2019, an organization that faced financial struggles throughout its championship season due to a lack of sponsorship.

“I’ve been here before, unfortunately,” he continued. “Over the years, I’ve found myself in this spot and it’s taught me to break out of my shell a little bit. The cost to do this is just out of control right now. It’s kind of sad that a driver that just won the championship is in this position.”

Fast forward to January, and Moffitt found his home for the 2019 season, joining Sheldon Creed, at GMS Racing in one of the team’s two full-time rides.

In Moffitt’s place, Austin Hill will join HRE to pilot the No. 16 Toyota.

“I’m thrilled to join HRE this season,” Hill said in a team release. “Shige [Hattori, owner] has built a great team, and what they accomplished last season has me extremely optimistic heading to Daytona [International Speedway]. I’ve had the pleasure to work with great teams in the past, including my family’s team in the K&N [Pro] Series, but this is an opportunity of a lifetime at HRE. Scott [Zipadelli] and the team proved what they’re capable of last season, and I can’t wait to get to work and see what we can accomplish this season.”

Hill comes out of his first full Truck Series season with Young’s Motorsports, where he scored a single top five, six top 10s and ended 11th in the championship standings.

With Moffitt landing at GMS Racing, 2016 champion Johnny Sauter was ousted from the organization after three years, about a month before teams were scheduled to hit the road for the season-opener at Daytona.

“Obviously, I was down here at the race shop and sat down with [GMS team president Mike] Beam and he told me we weren’t racing this year,” Sauter told SiriusXM on air shortly after the announcement was made. “He said it came down to financial problems, I guess. So, I think everyone knows this sport is expensive and I don’t bring any money to the table. I come from the school where you get paid to race.

“Having said that, Moffitt is going into the truck from what I understand, and I don’t know anything beyond that,” Sauter continued. “I didn’t get into financial with them, but if he’s bringing something, he’s bringing more than I am.

“You see a lot of good drivers get sidelined. It’s the nature of the beast. Team owners need sponsorship money, and I can’t begrudge them for that. I know what it costs. I hate it. We had our best year last year and came up just short.”

Less than two weeks before the season began, Sauter landed back at his old stomping grounds with ThorSport Racing, the team he left to join GMS beginning with the 2016 season. He’ll rejoin fellow veteran Matt Crafton, along with Ben Rhodes and Grant Enfinger. Myatt Snider is also set to run a part-time schedule with the organization in a fifth truck.

“I’m returning home,” six-time 2018 winner Sauter said. “I couldn’t be more proud of going back there and running for a championship.”

While Moffitt and Sauter are among the largest stories when it comes to driver changes, quite a few teams have seen shake-ups heading into this season.

“The Truck Series is always a lot of fun for me as a driver,” Busch said. “And as an owner, it gives me the opportunity to work alongside the young drivers that we have at KBM to get a better understanding of what they are experiencing. From year to year, rule changes affect the handling of the trucks. By continuing to be an active driver in the Truck Series, I’m able to provide better feedback to our young drivers, not only on the weekends I’m racing, but on the weekends when I’m coaching from atop the pit box as well.”